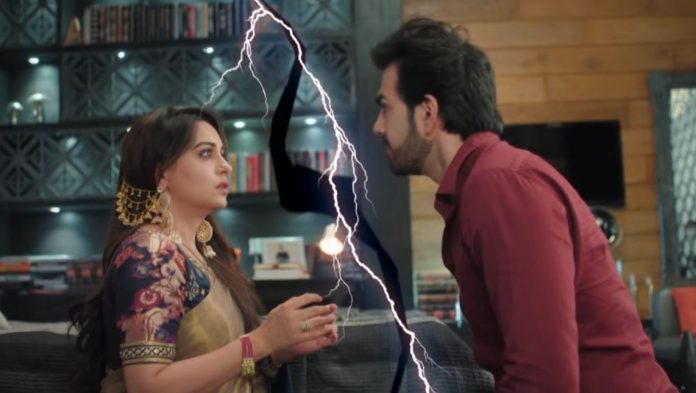 Kahaan Hum Latest Ronakshi Two divorces shock Sippys Tanya reminds Rohan that she is still his legally wedded wife. She shows him the wedding ring. Rohan removes the ring and throws it. He tells that the marriage and its symbol are gone now. He wants to leave the house. He packs his bags. He decided to divorce Tanya. He tells Tanya that he has heard enough of her nonsense and wants to go to Pari now. She asks him to go to Pari and get ready to face the destruction. She tells that when he sends the divorce papers, he will be ruined, since she has the evidence against him. She tells that the family will support her and throw him out.

She demands a big alimony. She threatens him to stop him home. She tells him that he can’t give her the alimony amount. He tells that he loves Pari and can’t tolerate Tanya anymore. He asks Tanya to do anything, but she can’t control him by the blackmail. She tells him that if he thinks of leaving her in the state of pregnancy, then she will get him arrested for emotionally and mentally torturing her. She tells that she will also charge her for adultery and breach of trust. Rohan doesn’t listen to her. She tries everything to stop him.

On the other hand, Naren gets injured after Nishi attacks him. Naren is rushed to the hospital. Nishi tells the family that Sonakshi met Naren and then he took this step to commit suicide. Sonakshi defends herself. She wanted to set things right between Naren and Veena. Nishi tells them that Sonakshi is interested in the property. Rohit meets Sonakshi at his hospital.

He asks her not to interfere in his family matters. He asks why did she talk to Naren about the property matter. He doesn’t want to discuss anything with her. He asks why can’t she always keep things to herself. She tells him that Sippys are her family as well and she will give her opinion. She faces many allegations one by one. Rohit gets angered on her, when she doesn’t listen to her. He tells her that no justification can prove her right. He is enough of her explanations. He gets too bitter in anger. She tells that its his mistake that he married her.

He is much upset that Naren’s matter has leaked into the society. He tells that she has to admit her lies, the drama is happening since she has come in his family. He tells her that she can’t completely deny his blames. He loses his temper since the matter is affecting his mum. She asks him not to say anything, that he regrets later. He makes her out of his cabin. She sits outside for hours. Nishi wants to take revenge on Sonakshi and break Ronakshi’s marriage.

This show had turned out to be worst now. Looks like the writer has lost his mind and started writing what ever crap comes to his mind. This will go down the drain very fast, because of this stupid story even Sonakashi acting is becoming irritating to watch. Time to move on and watch something else.