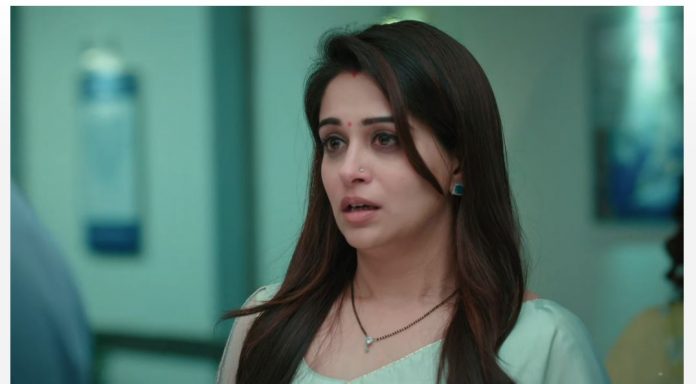 Kahaan Hum Blasting drama Upcoming ugly reveal Rohit stays stressed for Naren, knowing Veena wants Naren to get fine and return home. Rohit wants his mum’s wish to get fulfilled. Veena is deeply hurt that Sonakshi is the reason for Naren’s state. She discovers the pre-nuptial agreement papers. She gets the agreement to reveal to the family. Sonakshi hadn’t shared anything with Rohit, again thinking for the family peace. Veena turns negative and uses the agreement against Sonakshi. Sonakshi gets suspected because of the agreement, which states that Sonakshi will get 80% share of Sippys if they get divorced.

Nishi is playing with everyone’s mind in the weak moment. Veena is fragile minded in this situation. She doesn’t trust Sonakshi. She gets angry on Sonakshi for always hiding things from Rohit. Rohit loves Veena a lot. He also believes Veena, who questions Sonakshi’s honesty. Rohit is stuck in the worst situation. He can’t neglect Veena or Sonakshi. Rohit asks Sonakshi to answer Veena about the agreement. He asks her to admit if she really wanted his property. He asks Sonakshi how did she think of divorce before their marriage. He also feels that he made a mistake by marrying Sonakshi against Naren’s wish.

He suddenly loves Naren for making a big sacrifice and hiding it from the family. He tells that Naren agreed to give 80% of the property to Sonakshi for the sake of his happiness. He forgives his dad for all his faults, knowing Naren was trying to be the best dad. Nishi instigates Rohit against Sonakshi so that Sonakshi gets kicked out from Sippy family. Sonakshi becomes a pitiable person. She can’t solve everyone’s suspicion at once.

She wants at least Rohit to stand by her and understand the situation. She didn’t know that even Rohit will forget his marriage vows and leave her hand. Rohit gets fed up of the filmi drama creating chaos in his house. He decides to call off the marriage to put an end to the family woes.

Badimama knew bout Sona signing pre nup and striked off one line on the condition where she wrote she does not want a penny from sippys if at all ever she has to leave sippy mansion. Veena and yk knew. Yk what to tell, you are just a puppet in your wife’s hand. Sona should clear this out. Only Naren can prove this if he comes out of his critical state. The makers are showing all unrealistic things on this show.

Patiala Babes: Neil and Mini develop a new bonding. Neil falls in love with Mini. Saroj makes Arya against Mini. She asks Arya how could Mini slap her. Mini scolds Saroj for brainwashing Arya. She tells Arya that Saroj is doing everything to get a share in the property. She asks Arya to stop meeting Saroj. Neil supports Mini. They both relate to their pain. They both have a struggling story. They connect to each other and are coming closer. Mini finds hard to raise Arya. She tells that she isn’t Arya’s mother to raise her perfectly.