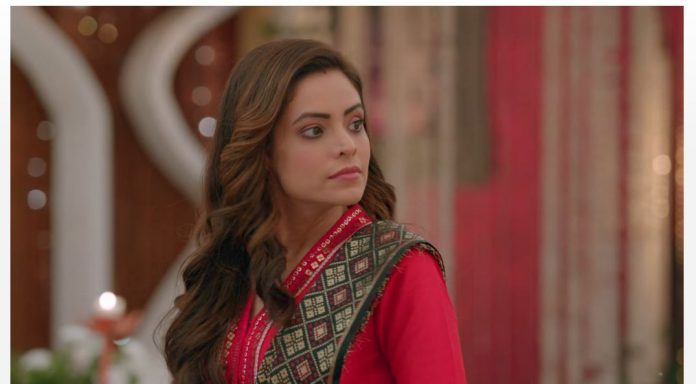 Kasauti Zindagi Doomed Komolika Upcoming Breakouts Viraj wants to take Prerna home. She refuses to go without Anurag. Ronit succeeds to get saved from Anurag. He is relieved and goes his way. Viraj calls Anurag to inform that Prerna isn’t moving from the place and wants to wait for him. Anurag asks Prerna to go home and take rest, since she is hurt and the place is still not safe. He doesn’t want her to fall in new trouble. He knows she is safe with Viraj, but still he gets too concerned for her. He asks Prerna to leave and promises to be with her soon. Prerna agrees to go with Viraj.

Anurag asks Viraj to look after her. This annoys Viraj a lot. Anurag feels sorry that he is coming between Prerna and Viraj. He is helpless because of his feelings. He wants to care for Prerna and not think of anyone’s opinion. Anurag returns to the cliff to get some hints. He gets lucky when he gets Jagga there. He catches Jagga and takes him to the car. Prerna and Viraj come home. Komolika finds Veena praying and irritating her further. She asks Veena to stop praying, since Prerna has come back home. She tells that Veena’s prayers have got answers.

Mohini enquires about Jagga. Anurag tells them that Jagga is the kidnapper who took away Prerna for murdering her. He tells that Jagga was hired for the task, they have to find the real culprit behind the crime planned. Mohini gets fed up since she doesn’t wish Anurag to get dangers home for Prerna’s sake. Anurag tells them that they have to find the mastermind, Prerna has been attacked thrice and she has been lucky to get saved. He wants to find the culprit at any cost. Mohini loses her cool. She can’t stop Anurag.

Anurag and Anupam tie up Jagga to the pillar with the ropes. Anurag tells that he will make Jagga admit the truth when the latter gets conscious. Anurag wants Prerna to stay back so that Jagga admits the truth. Prerna agrees to stay in Basu mansion. Veena permits him. Viraj also wants to stay with Prerna. Moloy asks him to feel like home. Mohini feels her house has become a guest house. Mohini gets hyper. Nivedita pacifies her. Mohini wants Moloy to respect her emotions. Nivedita asks her to control her anger and let the matter end. She feels its matter of just one day. Anurag tells Anupam that he will stay with Jagga. Anurag and Prerna share a moment.

He apologizes to her for leaving her and going after the goons. She tells her that he will always be with her, even after her marriage with Viraj. She knows that he worries for her a lot, that’s his love. She hopes that he gets his memory soon. She is soon that Anurag will find out Komolika’s truth. Prerna and Anurag recall their life’s journey filled with sweet moments. They yearn for each other. Komolika is afraid that Jagga may name her. She tells Anurag that she is scared of Jagga’s presence. He questions her, but she lies to him with ease.

Komolika spikes Anurag’s drink to make him sleep all night. She threatens Jagga so that she doesn’t get caught. Moloy happens to overhear her. Viraj too gets close to know a big truth about Anurag and Prerna’s love story. Will Moloy learn Komolika’s truth or will she make any clever excuse again? Keep reading.

Reviewed Rating for this particular episode: 2/5 Dragging
This rating is solely based on the opinion of the writer. You may post your take on the show in the comment section below.