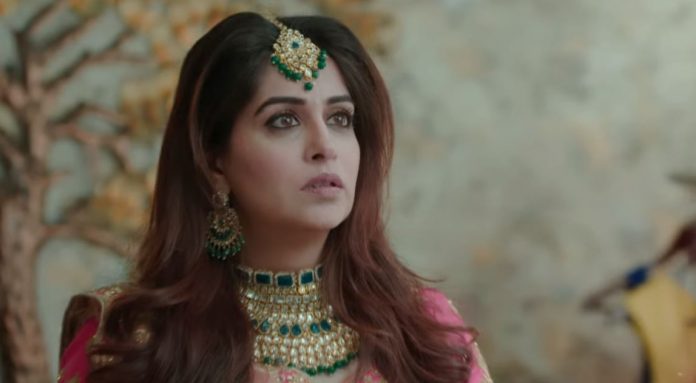 Kahaan Hum Real Dark Shocker Ronakshi upcoming Starplus Rohit finds Sonakshi really stupid to take place in Veena’s room just to check his body temperature. He asks for Veena. She tells him that Veena is in the washroom. He doesn’t listen to her. He wants to be ill and not take medicines. Sonakshi finds a way and realizes that Veena can’t tolerate Rohit suffering from fever. She speaks to Vimmi with a motive to make Veena overhear her. She tells that Rohit isn’t taking medicines to get rid of high fever. Veena is upset that Rohit cheated her by hiding Naren’s truth and fooled her all these years. She gets worried for her son, knowing he isn’t well.

She looks after Rohit in her way while showing off annoyance towards him. She administers the medicines to him. Sonakshi is glad that Veena has done her duty towards Rohit and is melting her heart. She wants Veena to forgive Rohit and hug him. She knows that Veena matters a lot to Rohit and he wants to have the same loving relationship with his mom. She wishes Veena and Rohit get back to normal selves. Sonakshi tells Vimmi that her plan worked, Veena has just done the thing as she predicted. Veena goes to meet Naren. Rohit also wants to rush to the hospital and check on Naren’s vitals. Nishi doesn’t want Sonakshi to win. She wants Sonakshi to get out of their lives.

On the other hand, Suman is concerned for Pari’s future. She is fixing her marriage with a rich guy. The guy Viren wants to take Pari on a date. Suman allows them to go so that they know each other well. Suman wants Pari to agree for the marriage. Veena’s friends pacify her about Naren’s condition. They go away and start backbiting about Naren’s cheat.

Rohit gets angry on hearing their gossip. He scolds them for not valuing Veena’s sentiments. Nishi meets Rohit and finds him in the middle of this argument. She also reprimands the ladies and makes them go away. Rohit feels ashamed of the taunts on Naren. He worries when he finds Veena witnessing the upsetting drama. Nishi asks Rohit to let Veena stay alone for some time. She brainwashes Rohit against Sonakshi. She tells him that Rastogis have ruined their happy family. She blames Suman for revealing the truth to the society. She tells him that Sonakshi is winning all the praise by the society and fans.

She tells that Veena is not at fault and still tolerating the worse. She tells him that Sonakshi’s fans should know her truth. She angers him by stating that Sonakshi isn’t with them to look after Naren, she has nothing to do with their sorrow. Rohit gets much upset. Netra meets him with the event invite. She knows about his father’s condition, but requests him to get some time out for attending Sonakshi’s success event. Rohit has his anger heaped in his mind. He wants to attend the event and insult Sonakshi right in front of the media and fans to bring out her greedy side.

Later, Sonakshi attends the event. Sonakshi and Sumit begin the auction of their show costumes. They get a good welcome by the media and fans. Netra and channel head praise Sonakshi’s acting skills and hard work. They don’t want anyone else to play Parvati’s role. The media questions Sonakshi about quitting the show. The channel head pays respect to Sonakshi and tells that he won’t be accepting her resignation, she will be Parvati always, there can never be any replacement for her. Sonakshi gets speechless.

Netra tells her that she will make such a schedule that Sonakshi doesn’t have any problem in balancing work and family. She assures that Sonakshi will remain Parvati. Sumit tells them that just Sonakshi can be Parvati, no one else. He asks Sonakshi not to lose the fans’ love. Rohit reaches there and makes a surprising entry. Sonakshi didn’t expect him to come. He applauds for Sonakshi and introduces himself as her husband.

Elsewhere, Rohan starts caring for his wife Tanya. Deepa gets hopeful that Rohan is changing and Tanya would be happy from now. Tanya knows Rohan is just worried for his property and avoiding the divorce. She doesn’t think his emotions are true. Sonakshi wants to know what’s on Rohit’s mind. She stays stressed seeing Rohit around.

Rohit witnesses the auction and bids 10 lakhs for Parvati’s saree. He tells that Sonakshi has worn the saree and he would not let anyone take it away. He tells that he is possessive about his wife. He asks her to take Parvati’s avatar for her fans. Sonakshi worries and is left with no option than to agree.

Sonakshi meets the police inspector, who reveals the shocking evidence found by his team. He tells her that they have got a footage from Sippy’s neighbor, the footage shows that someone from Sippy family attempted to kill Naren. She is much shocked when he shows the footage to her. Sonakshi realizes that someone attempted to murder Naren for the sake of property. He tells that the murdered is a left-hander. Sonakshi doesn’t get to see the murderer in the clip. She is disturbed. Inspector asks her to help the police and find out the culprit hidden in Sippy family. He tells that someone forged her signs in the new prenuptial agreement. She realizes that the murderer is framing her deliberately. She agrees to help in finding the truth.

Consequently, Sonakshi takes the avatar of Parvati and decks up. When Rohit starts verbal bashing to malign her image in front of media, Sonakshi gets a huge shock. Rohit insults her to vent out his anger. She didn’t expect him to get her ashamed like this. He tells that Sonakshi isn’t like she appears, she has ruined his life completely and he is disgusted to admit this. Sonakshi worriedly handles the situation.

She stays calm and tells the media that Rohit and she had a bet between them, she wanted him to do something shocking and he has really shocked her by his allegation drama. She tells that she is impressed with her husband’s acting skills. She asks Netra to write a cameo role for Rohit in KPK show. She turns Rohit speechless by her composed reaction. Sonakshi goes away from the media and sheds tears. She doesn’t want Rohit to hate her. She pledges to find the culprit. Will she find Nishi’s crimes and expose her? Keep reading.

Why are the makers turning this serial into a usual saas bahu saga. Such a good concept and story is getting ruined. How can Rohit be insulting his love publicly and every now and then everyone blames only Sonakshi for every thing, even the pre nup agreement bit was known to all the elders including badi maa, veena sippy, yash, then how come she got blamed for it. It’s disgusting.