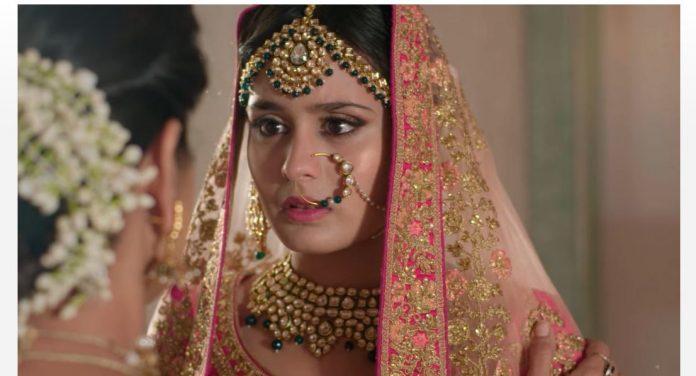 Rishtey Starplus Mishti extreme move Abir faces fatal risk Abir and Mishti decide to part ways for the sake of their families. Mishti is bounded by her promise to Nannu. She can’t cheat Nannu or her family, who have always supported her. She is restless about Abir’s well being. She feels that Abir is in some huge danger. Her heart asks her to check on Abir once to be sure that he is okay. Mishti gets occupied with thoughts of worry for Abir. Jasmeet applies Mehendi on her hands with much love. She wants Mishti to keep Nannu happy. Rajshri finds Mishti lost. Kuhu learns that Abir is missing. Kunal panics when he fails to find Abir anywhere.

He tells Kuhu that he is feeling scared that Abir is really in some trouble. Kuhu realizes Mishti and Abir’s strong connection. She doesn’t want Mishti to hurt Nannu either. She finds Mishti worrying for Abir. Mishti prays for Abir. Abir gets help from some saints who come at the lake side for performing the special prayers. The saints get to see Abir floating in the lake. They get worried that a life is in danger. Nannu cheers up Mishti. He feels bad that he broke her trust. He doesn’t want to see her going away since he loves her.

He is ready to do anything for her love. He tells Mishti that soon after their marriage, they will be leaving for London, where they shared their feelings and came closer. He wants to start his new life in London. He doesn’t think Mishti should have any problem with his decision. The family feels upset that Nannu and Mishti will go away, but wish for their happiness. Mishti isn’t sure if she should go away. She is still stuck in Abir’s thoughts. Rajshri learns that Mishti isn’t willing to go away. She questions Mishti about her thoughts. Mishti gets ready for her marriage. She shares her heart out. She tells Rajshri that she feels Abir is in danger.

Meanwhile, Kunal and Jugnu fail to find Abir anywhere. The saints save Abir’s life by bringing him out of the lake and also call for the doctor. Kunal hears about an emergency case. He doesn’t realize that the man needing treatment is Abir. Jugnu asks Kunal to take Meenakshi’s help, since she will find Abir out of any place. Kunal rushes home to meet her. Rajshri doesn’t want Mishti to think about Abir when she is marrying Nannu. Mishti tells her the reason for Abir breaking their marriage. She reveals that Meenakshi threatened Abir.

Meenakshi calls Abir and is worried for him. Mishti tells Rajshri that Abir saved her life by following his heart. She wants to save Abir some how. She promises to return home and marry Nannu. She tells that she will never hurt her family. Rajshri keeps a condition that Mishti won’t return to them if she goes to meet Abir. She doesn’t want Mishti to spoil Nannu’s life. Nannu feels guilty that he didn’t help Abir. Shaurya asks him to stay happy. Varsha tells Nannu that if there is truth and faith in the marriage, then Nannu and Mishti will be happy. Nannu has lied to Mishti. He fears the outcome.

Meenakshi calls him for a meet. He worries for Abir’s life. Saints try to find Abir’s identity to inform his family. Meenakshi enquires about Abir. She asks Laxman to find out at the hospital. Nannu hides and goes to meet Meenakshi secretly. She wants Nannu to tell her the truth about Abir. Nannu denies to know anything. He wishes that Mishti never learns about Abir’s disappearance. Rajshri worries when Mishti decides to go to Abir.

She doesn’t know what to tell Vishwamber. Mishti takes the extreme step to save Abir’s life. Mishti leaves the house to know about Abir. She finally tracks Abir and reaches him, only to find him hurt. Mishti professes her love for Abir. Meenakshi wants to reach Abir and keep him away from Mishti. She knows that Mishti will never leave Abir in problem. Nannu will be realizing the strong love bond shared by Abir and Mishti. Will Nannu confess his misdeeds and unite Mishbir? Keep reading.