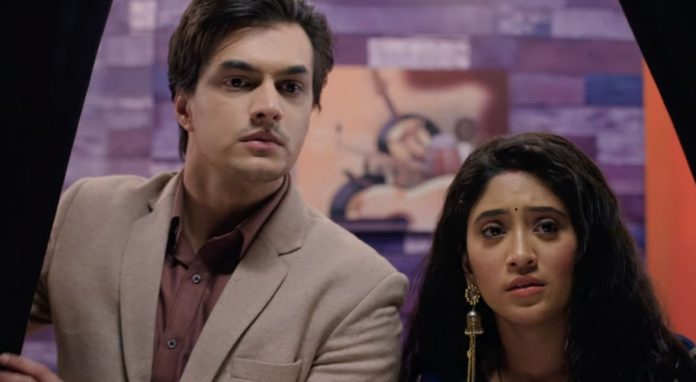 Yeh Rishta Trisha dead Kaira unthinkable find lined Kartik and Naira are glad that the event got successful. They don’t want Trisha to take any stress about the faulty speech. They tell her that someone has done this mischief, they will surely find out. They ask her to be happy with the fact that the performance went so well. Trisha tells them that she will go and have a cup of coffee. Kartik asks her to go with Lav and Kush. Trisha doesn’t want to go to them. Naira asks Kartik to just get the certificate from Trisha. Kartik goes to meet Trisha in the green room. He doesn’t find her and gets the certificate. Trisha gets kidnapped by Lav, Kush and Abhishek. Kartik hands over the certificate to Naira.

He tells her that Trisha has gone to have coffee. The family is glad that the everything went well. They congratulate Naira. Naira looks for Trisha. She thinks maybe Trisha had some work. Kartik romances Naira. She gets Trisha’s earring. She doesn’t think that Trisha is in some trouble. The family praises Lav and Kush for working hard for the event. Akhilesh doesn’t think his sons can do something good. He is much upset after the beer incident. Surekha asks him not to blame her sons always.

Kartik tells that Lav and Kush are with Trisha, they will keep her safe. Lav and Abhishek insult Trisha and misbehave with her to make her apologize. Kush is worried and doesn’t want to become part of their misdeed. He asks them to leave Trisha. Gayu feels sick. The family worries and takes her home. Doctor examines Gayu. She asks Gayu to have a proper diet. Naira is worried that Trisha isn’t answering her call. Lav is worried by the family’s calls. Abhishek asks him to lie to them about Trisha. Lav answers Kartik’s call and tells him that Trisha isn’t with them. Lav and Abhishek molest Trisha. She manages to run away.

Kush tells them that if Trisha reaches home, she will cry and tell the incident, then they won’t be spared. Abhishek tells that they have scared Trisha a lot and now she won’t be going against them. He asks them not to stress. Kush tells that its a big insult for Trisha, she won’t be keeping quiet. Lav pacifies Kush. He wonders where did Trisha go, if she didn’t go home by now. Kartik and Naira are also worried. Kush tells that Trisha may have gone to the police station. Lav doesn’t think so. Abhishek tells that she may have gone to the dance academy. Kush doesn’t want to accompany them. Lav asks him to come, they will find Trisha and explain her.

He assures that he will take the blame on himself. They head to the academy, where Kartik and Naira are searching for Trisha. Naira gets worried for Trisha. Kartik asks her to be positive. Lav and Kush think if Trisha committed suicide. Abhishek asks them not to panic. They get Trisha’s phone and switch it off. Kartik and Naira try to track Trisha. Naira tells Kartik that she is getting a bad intuition as if Trisha is in some problem.

They go to the police station to file the missing complaint. They learn about an accident case. They want to know about the girl, assuming she is Trisha. They get troubled with the fear of losing Trisha. Kartik and Naira reach the hospital to meet the accident victim. Lav and Kush learn that Trisha is dead. They get afraid to get blamed for her death. Is Trisha really dead? Keep reading.