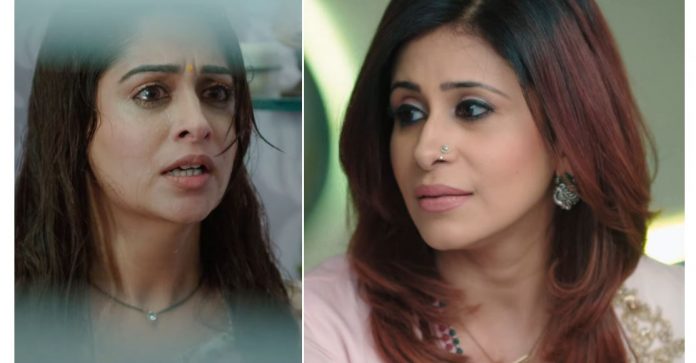 Kahaan Hum Nishi Sonakshi Rocking Challenge Shocker Sonakshi learns that someone from the family attempted to kill Naren. ACP tells her that she has to help her in finding the culprit and solving the case by keeping a careful watch on her family. He tells that he will inform her about the signature forgery as well after getting the report. Rohit awaits Sonakshi at the auction event. Sonakshi returns in the Parvati attire. Rohit goes on the stage to speak about Parvati. He praises the character Parvati, which Sonakshi plays convincingly. He gets intoxicated after sipping in some drinks. He loses his mind and vents his frustration on Sonakshi in front of the channel staff and media.

He tells them that Sonakshi isn’t like Parvati, she isn’t a great Bahu for Sippys. He tells that he really regrets to marry Sonakshi, he wanted a marry a perfect woman like Parvati, but she has ruined his life. He tells that Parvati is a fictional character, Sonakshi doesn’t relate to her reel role. He blurts out his marriage truth. He is disgusted due to the series of events upsetting his family. Netra and Sumit know that Rohit is venting out his anger. They are helpless to watch Rohit ruining Sonakshi’s public image, which won’t be good for her fame and show. They want to stop Rohit some how. Sonakshi finds the media gossiping.

She instantly handles the situation with much sensibility. She tells them that she had challenged Rohit to do something surprising, but he has left her shocked by his amazing acting. She asks them to just applaud for her husband. She asks Netra to give him a cameo role in their show, which will get them good TRPs. She hugs Rohit and warns him against his misbehavior at her work place. She asks him not to do any drama further. Rohit understands that he made a mistake. Sonakshi feels sorry that he is crossing limits.

She tells him that its her love that she is forgiving him. Later, she goes away to clear her sad face. She wipes her tears when ACP returns to share the reports. ACP tells her that the murderer had forged her signs to show Naren’s murder attempt as his suicide attempt. He tells that someone is trying hard to frame her in the suicide case. He tells her that the person is left-handed and she may find the person easily in the family with a close observation. Sonakshi agrees to help the police. She is much disturbed because of Rohit, but stays strong.

Elsewhere, Pari spends time with Viren and shows interest in his talks. She gets upset when she finds Rohan and Tanya at the same cafe. She vents anger on Viren when he questions her virginity and walks out. She loved Rohan and is heartbroken. She soon realizes that she is pregnant. She wants to hide the test results from Suman. She is much worried since Rohan had called their relationship over. She really wanted to move on in her life and didn’t expect her pregnancy to pose a problem. She wonders what will she do about the pregnancy. She wants to share the news with Rohan. Nishi Sippy is happy to sign the cheques and feels the power in hand. She wants Naren to die soon, so that she gets all the power and property in her hands.

Sonakshi comes home after the event ends. She learns from Vimmi that Rohit is getting overdrunk. She rushes to help Rohit. His state gets bad, but he prefers to keep Sonakshi away. He hates her and wants to humiliate her in front of her fans. She wants him to come out of his intoxication. She makes him stand under the shower so that the water gets him to normalcy. He confesses love to her.

Even she confesses love to Rohit. He recalls the ongoing tension. He breaks their romantic moment. He scolds her for ruining his family. She alerts him about his conspiring family. He doesn’t believe her. He thinks she is blaming others just to cover up her own mistakes.

He asks her to better stay away from his family. She vows to prove that she is innocent. She wants to find the culprit in the family. She begins to spy. Veena badly misses Naren. Sonakshi observes everyone and realizes that Nishi is a left-hander. She wants to know about Nishi further. Rohit doesn’t know Sonakshi’s new plans. Nishi isn’t alert. Sonakshi catches Nishi red-handed and confronts her. She tells that she will expose Nishi’s crime. Nishi throws a big challenge on her. Nishi wants to get Sonakshi ousted. How will Sonakshi succeed? Keep reading.

Please stop all the nonsense going on in the serial, it has really ruined the concept with what it had started with! And really can’t believe that Rohit has changed so much that he has lost his faith in his wife, come on now from my point of view Rohit by now understands that Sonakshi can never do any kind of harm towards his family. Rohit’s behaviour has let me down so much that I’ve stopped watching the serial. As an audience I feel let down by the story! It’s heading to be another saas-bahu drama!