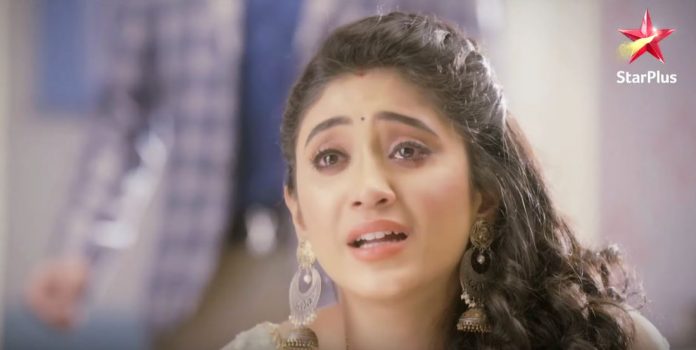 YRKKH Heartbroken Kaira Promo Chahatein Upcoming Yuvraj decides to marry Prisha to get Saransh’s custody. He thinks the marriage will be namesake since Prisha will be in jail forever. He wants to get Saransh’s property. He feels she will be suffering all life after marrying him. Rudraksh offers a marriage proposal to Prisha and tells her that he will get her freed from the jail. He asks her to think of Saransh’s future.

He blackmails her to convince her for marriage. He wants to punish Prisha by marrying her and making her away from Saransh. Both Rudraksh and Yuvraj have evil intentions. Rudraksh hates her, while Yuvraj wants to reap benefits from Saransh. Prisha decides to accept Rudraksh’s hatred for Saransh’s sake. Prisha and Rudraksh get married in the upcoming track.

Yeh Rishta Kya Kehlata Hai:
Kartik and Naira get a huge shock on knowing about Trisha’s accident. Lav gets scared that he will be caught in the molestation case. He steals Trisha’s phone and buries it in the soil. He doesn’t want the phone to get tracked. He wants Kush to keep silence and not invite troubles. Lav tells Kush that he wanted to teach a lesson to Trisha. He turns negative. Kush feels guilty. Lav commits more mistake because of his fear of getting exposed in front of the family. Kartik and Naira learn that Trisha was molested. They can’t believe this.

Naira learns about Abhishek’s involvement. She gets moved when they learns that Lav and Kush are responsible for Trisha’s state. Kartik gets heartbroken knowing his brothers’ crime. Lav and Kush troubled her and put her in trauma. They didn’t know she will try to commit suicide and come in front of a truck to give up her life.