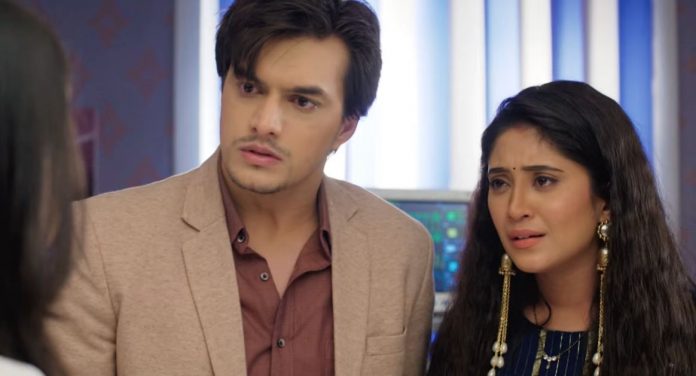 Yeh Rishta Starplus Unthinkable news Kaira meet Trisha Kartik and Naira get super worried for Trisha. They don’t find Trisha at the academy or home. Naira gets negative thoughts. She takes much tension. Kartik asks her not to get tensed, Trisha would be fine. Kush feels suffocated when he hides inside a closed space. Kartik and Naira check the place well, but don’t see the guys hiding. Lav asks Kush to hold himself until they go out. They see Kartik and Naira still outside and hide again. Kartik tells Naira that they should file a missing report. He gives hope to Naira that Trisha would be fine. Lav and Kush get spotted by Naira. Naira tells Kartik about them. Kartik asks the reason for their presence.

They find Kush falling short of breath. Lav lies to them and tells about Kush’s allergy. He tells that they came to pick Abhishek’s car. Kartik tells them that Trisha is missing. Lav acts unaware. Kartik tells that they are going to file a police complaint. Kush gets most worried. Lav and Abhishek tell him that nothing will happen to them. Goenkas worry for Trisha. Surekha pities Trisha. Akhilesh tells that he won’t spare the culprits responsible. Lav and Kush get panicking when they hear the family conversation.

Kartik and Naira reach the police station and file a missing report for Trisha. They come across a truck driver who reports an accident. The truck driver tells the police that the girl intentionally came in front of truck to die. He pleads his innocence. Kartik doesn’t think that the girl could be Trisha. Naira feels Trisha is in some big problem. She asks the truck driver about the girl. Kartik and Naira worry knowing the girl resembled Trisha and the accident happened near the academy. They rush to the hospital to meet the accident victim. They receive a big shock on seeing Trisha in the ICU. Naira breaks down. Kartik pacifies her.

He tells the inspector that Trisha is not responding, she is in coma. Kartik informs the family that they found Trisha, but she met with an accident. Goenkas worry for her life. Lav and Kush learn this news. Kush worries that they will get caught. Samarth tells that police will be coming to investigate the matter. Lav fears that Trisha’s phone may create a problem. He buries the phone cleverly, but Kairav happens to see this. Lav asks Kush to be confident and not reveal anything in front of the police, else they will be in big problem. Naira tells Kartik that Trisha was her responsibility.

She feels she has failed to take care of Trisha. Kartik asks her to keep hopes, Trisha will get fine soon. She wants to know why did Trisha run in front of the truck. Doctor meets them and gives a shocking piece of news. She tells them that Trisha is in coma, her state is bad, but they are trying their best. She asks them if the culprits are caught. Naira tells that the truck driver confessed about the accident. Doctor tells them that Trisha got molested. She asks about the molesters’ arrest. Kartik and Naira get shell shocked on knowing this.

Doctor tells them that Trisha was molested and she ran to save her life, which resulted in her accident. She asks them to nab the culprits and not worry for Trisha’s treatment. Naira doesn’t want to leave Trisha alone. Kartik gives her strength. Naira suspects Abhishek and also Lav-Kush. Will Kartik and Naira learn the truth? Keep reading.