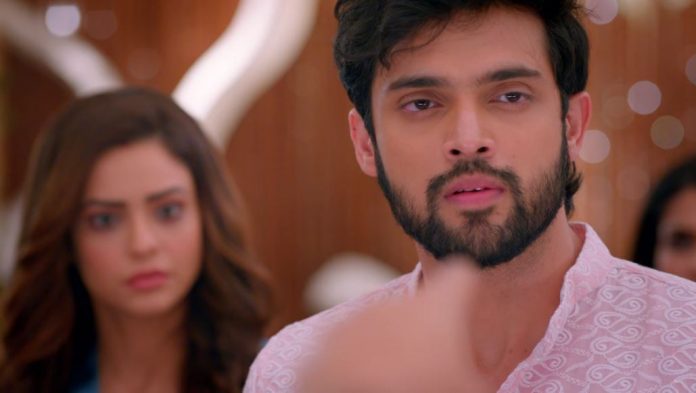 Kasauti Zindagii Today Shocking accusation on Anurag Anurag questions Jagga about the person who hired him to kill Prerna and her baby. He wants to know the culprit’s name at any cost. He goes to the extent of sternly threatening Jagga. He also tries to bribe Jagga. He asks Jagga to just give him the answer if he wants to save his life. He tells that he can’t take the matter lightly, since its about Prerna’s life. Anurag’s concern makes Prerna cry. She knows his concern is his love. Mohini had called the police to end the matter and send the goon away. She wants Prerna to leave from her house and not disturb Sonalika’s life further. Police arrives in Basu mansion on Mohini’s call.

Anurag tells the family that inspector is his friend. He tells the entire incident to the police. He is angered that Jagga tried to stab Prerna right in front of them. He also adds that Jagga attacked Sonalika also. He hates the fact that Jagga’s boss is still free. He tells the inspector that he will not let Jagga go with the police until he reveals his boss’ name. Komolika gets scared that Jagga might speak up on getting more interrogated. She tries to keep her calm. Inspector asks Anurag to go ahead and interrogate Jagga.

They ask Jagga about his boss. Prerna tells Anurag that he is doing the right thing. She cares for his wound. Viraj finds them together in a moment. He doesn’t want to doubt, but can clearly see their love. Prerna asks Jagga to tell them about the culprit. Jagga asks her why is she asking if she already knows it. Anurag and Viraj get puzzled. Jagga signs towards Komolika first, which makes everyone question her. He then makes a shocking accusation on Anurag by telling the police that Anurag hired him to kill Prerna. The family knows Jagga is lying.

Anurag bashes him a lot and injures him. He goes mad in rage. Police stops Anurag from taking law in his hand. Jagga gets a chance to run away from Anurag. Anurag, Viraj and Anupam run after Jagga. Anurag gets more hurt. Jagga laughs that he got saved and also escaped. Viraj catches him and bashes him too. Jagga fights him and makes his exit on time. The police tries to chase him. Inspector assures that they will catch Jagga for sure. Veena comes to Basu mansion and worries for Prerna. Mohini and Komolika ask Prerna to leave. Komolika tells that the game isn’t over. She challenges Prerna again. Viraj observes Anurag and Prerna’s moment again.

He thinks if he is thinking right. Prerna goes home. She feels that Komolika is making many plans to take revenge, without realizing that her plans are bringing Anurag and her (Prerna) closer. She is glad with the developments. She hopes that Anurag recovers his memory soon. Shivani wishes the same for Prerna and Anurag’s union. On the other hand, Komolika meets Ronit. She wants Prerna dead. She threatens to harm him if he doesn’t help her. Ronit gets scared seeing her madness. She tells him about her new plans, which will turn Prerna into her slave. She wants to blackmail Prerna and keep her terms.

Ronit wonders about her plan, whom will she threaten about, will it be Anurag or Prerna’s coming child. He wants to know her plans in detail. Komolika swears to make Prerna’s life hell. Anurag wants to meet Prerna and know that she is okay. Anupam knows his feelings and supports him. He asks Anurag to go and meet her. Anurag happily hugs her. He feels deja-vu. He tells Anupam that he felt the same moment happened before. Anupam is glad that Anurag is regaining his old memories. Komolika doesn’t want Anurag to recall the past.

She gives him drugs to slow his memory revival. She doesn’t want him to recall anything related to Prerna. Anurag and Prerna happen to meet. They get into a romantic situation. Viraj sees them and gets puzzled.