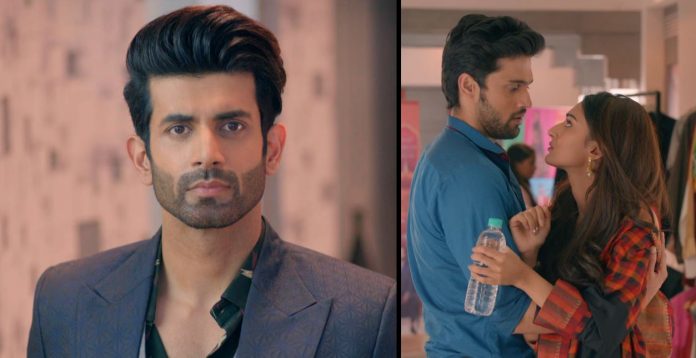 Kasautii Starplus Viraj villainous truth AnuPre romance Prerna feels Anurag has come home to meet her. Veena asks her to get ready, since Viraj would be coming any moment to pick her. She asks Prerna to go along with Viraj for shopping. She reminds that Prerna and Viraj’s engagement is due tomorrow. Prerna is much sorrowful over her life’s turning point. She wants to tell her life’s truth to Viraj, hoping he will understand, being a nice person. She still holds a belief that Anurag has come to meet her. Prerna checks the door. Veena feels Viraj has come and Prerna will be heartbroken when her belief falls apart.

She is equally sad for Prerna, knowing Anurag and Prerna can never unite. Prerna gets a wonderful surprise in the form of Anurag. He really comes to meet her and take her welfare. Prerna’s belief succeeds and surprises Veena too. Veena isn’t wrong either, since Viraj comes at the time same. Anurag asks Prerna about her well-being. Viraj tells them that he has to rush and take Prerna for shopping. Anurag gets clueless. Viraj and Prerna tell him about the engagement shopping. Anurag feels jealous that they are going out together.

He wanted to spend time with her. Veena asks Anurag to come and sit with them. Anurag makes a work excuse and rushes out. He wants to follow Prerna, knowing where she went. Anurag and Prerna are eternal lovers. Destiny brings them together again and again. Anurag wants to visit the same mall with some excuse. He thinks to call up Sonalika to ask her for the outing. When she doesn’t call, he calls up Mohini. Viraj wants to buy the engagement ring by Prerna’s choice. Mohini is glad that Anurag is putting efforts and planned the outing with Sonalika.

Anurag asks Komolika if she would like to join him for shopping. Komolika is more than happy by his request. She tells Mohini that she will go to Anurag. Mohini is relieved that Prerna is finally out of their lives, Anurag is liking his wife and getting normal. Nivedita tells them that things will get better with time. Mohini tells her that her friend also owns a shop in the mall. She wants to go there and shop some jewellery. Veena also plans to visit the same mall. She tells Shivani that they will be buying engagement gift for Viraj. Basus and Sharmas’ members reach the mall. Viraj asks the jeweller to show the best engagement ring.

Prerna wants to talk to him. He gets busy on a call. He makes a leave. Prerna awaits him. He tells about his mum’s call. Prerna gets Veena’s call and doesn’t answer. She finds Veena and Shivani there. Veena tells him that she wanted to buy a suit for her. Viraj behaves politely and goes with Veena. Prerna finds him a good-hearted person. She fails to tell him the truth. He asks her to select the best ring she likes. Anurag and Komolika come to the same mall. He sees Prerna and wants to go to her quickly. He asks her to shop for herself.

Komolika tells him that she always shops alone, this time he has to shop for her. He gets uncomfortable by her touch. She holds his hand and reminds him that he also holds Prerna’s hand often. She taunts him and turns him speechless. He hurriedly selects a saree and asks her to try it. Mohini and Nivedita surprise them. They tell that they have come to shop for jewellery. They take Anurag along. Anurag doesn’t find Prerna there. He looks for her. Prerna thinks its better if she hides the truth from Viraj, maybe the marriage rituals should proceed, so that Anurag recovers his memory. She feels bad to give false hope to Viraj.

She just wants Anurag to get fine so that their lives get back on track. She tells Shivani that she will not stop the marriage. She gets a cough. Anurag comes to help and hands over the water bottle. He tells her that he wants to be with her, he feels safe and happy when she is around. He tells that he would have never let her cry for any reason, he doesn’t like her tears. They get emotional and have a moment when they are drawn closer. Viraj gets angered seeing them closer. Anurag likes an engagement ring for Prerna.

He makes her wear it. The ring gets stuck in her finger. He jokes that they got engaged. Mohini learns that Anurag is with Prerna, not Sonalika. Viraj turns out to be a villain. He meets Jagga and bashes him up. He doesn’t scold him for kidnapping Prerna, but for leaving her alive. Viraj and Komolika will be seen joining hands against Anurag and Prerna.