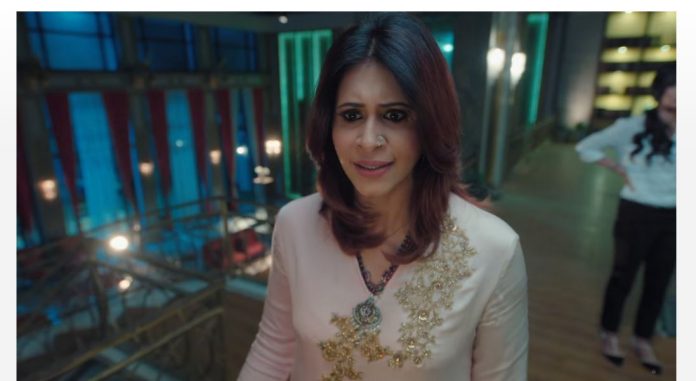 Kahaan Hum Nishi suicide storm Sonakshi Rohit Starplus Rohit arrives home to pick Sonakshi and take her to the hospital for Preeti’s sake. Sonakshi recalls the humiliation when she sees his face. She doesn’t want to talk to him or hear his clarification. He questions her about avoiding his calls purposely. She clears his misunderstanding. Rohit is in no mood to apologize to her. She tells him that she didn’t know about his calls. She isn’t interested to talk to him. He doesn’t tell her anything and just lifts her to put her in the car. They drive to the hospital.

Meanwhile, Rohan tries to be a good husband and pleases Tanya. Tanya is hopeful that her marriage will survive. She gets happy. Her smile angers Pari, who reaches her in a rage. Pari threatens to kill Tanya if the latter comes between Rohan and her. She doesn’t want Tanya to win. She tells Tanya that she has something precious for which Rohan will come back to her. She scares Tanya and asks her to better be ready to leave Rohan. She tells that she knows Rohan is selfish and greedy, but she wants Rohan to pay for his mistake. She hides about her pregnancy. She wants to disclose the shocking news to Rohan. Tanya feels really terrified with Pari’s unseen side coming out.

Sonakshi asks Rohit to leave her hand, since everyone is watching them. Rohit doesn’t care for anyone, since its his own hospital. He rightfully takes his wife along. She realizes that he has got her on Preeti’s request. Preeti is very fond of Sonakshi.

She is happy to meet Sonakshi, her superstar. She thanks Rohit for keeping his promise. She asks Rohit about Preeti’s condition. Rohit tells Preeti that he got her best friend and now she has to go for the tests. Preeti asks them about their annoyance. He lies to her. Sonakshi tells that they have really fought. They fight in front of Preeti as well. Preeti asks them not to fight and end their difference. She tells Rohit that Sonakshi can never be wrong. She insists him to apologize to her. Rohit gets compelled to apologize to his wife. She asks him to profess love. When he gets hesitant, she asks him if he doesn’t love his wife.

Rohit tells that he loves Sonakshi and admits too. Preeti makes them confess love. They get into a cute moment when they hug for Preeti’s sake. Sonakshi wishes that everything gets fine. She loves him a lot. Preeti gets prepared for the tests. Moreover, Nishi brainwashes Akash and Deepa against Sonakshi. She tells them about Sonakshi spying on her. Akash tells that Sonakshi was spying on him as well. He is much miffed with Sonakshi, since she revealed his real thoughts of opposing Naren. Akash backbites about Sonakshi. This doesn’t go well with Yash, who still believes Sonakshi.

Yash asks them not to get against Sonakshi. Nishi asks Yash to stay out of the matter. She swears to not spare low-class Sonakshi. Sonakshi returns home after meeting Preeti. She thinks of Rohit. The power goes off when Nishi arrives there. Sonakshi gets too horror-struck when Nishi appears in front. Nishi confronts her for spying in her room.

She insults Sonakshi and her family. Sonakshi stops Nishi from yelling at her, since she isn’t nobody to tolerate all the filth. She tells that she has just given this right to Rohit, who is her love and can vent anger on her. She doesn’t want anyone else to treat her badly by forgetting who she is. She asks Nishi if Sippys have the class, where a family member attempts murder and commits more crimes like forging signatures. She asks Nishi to answer her about the forged signatures. She tells her that she found the evidence in her room, which means either Yash or Nishi are responsible for forging. She calls Nishi a disgusting woman.

Nishi panics that Sonakshi is blaming her. She reacts and pushes Sonakshi, just the way she pushed Naren down. She asks Sonakshi if she means to blame her for Naren’s accident as well. Sonakshi realizes that Nishi is a left-hander, who pushed Naren with a murder motive and also forged the signs in new agreement papers. She catches Nishi’s hand and accuses her for attempting to murder Naren. Nishi gets badly caught.

Further, Sonakshi rebukes her for the evil move. She asks Nishi if she didn’t think of Naren and Sippy family once. Nishi tries hard to deny the blames. Sonakshi tells Nishi that she will tell the entire family about the truth, since the police already holds the evidences. She wants to testify against Nishi and get her arrested. Nishi finds Veena coming. She turns the tables by an instant emotional drama. She pleads to Sonakshi to save her family. She tells that she is ready to take the blame on herself. Veena overhears their conversation.

She asks Sonakshi about the matter. Sonakshi realizes the drama motive. She asks Veena not to come in Nishi’s drama. She reveals the shocking truth that Nishi attempted to kill Naren. Nishi denies the blames. Sonakshi tells the entire family that Nishi pushed Naren down from the balcony to kill him, so that she gets the Sippy property.

She also reveals that Nishi forged her signatures to frame her. Nishi denies Sonakshi’s serious allegations and wins her family’s sympathy. Yash and Nishi defend themselves. Yash is innocent and doesn’t think Nishi is responsible. Rohit supports Sonakshi on knowing the entire matter. Nishi plays the suicide drama to win the family’s trust. She wants to prove that she has no interest in Sippy property and business. Sippys fear of losing Nishi on seeing her suicide attempt. Sonakshi gets blamed for Nishi’s state again. Will Rohit stand by Sonakshi and expose Nishi’s truth? Keep reading.

Best Comment by brewing stories:
Please don’t drag this Nishi drama anymore we are really bored as it is dragging since too long, let Sonakshi be fully prepared to expose Nishi right away, as it is really getting monotonous now.