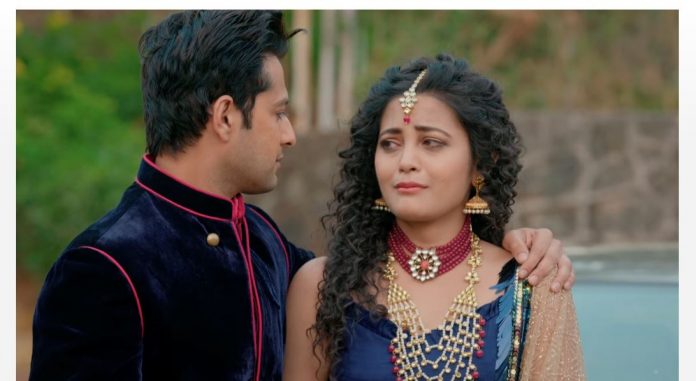 Rishtey Starplus Unthinkable surprise New Plotting begins Mishti chooses Abir’s love over Nannu’s friendship and shows much courage in front of her family. She justifies her decision by telling Nannu that she wouldn’t be able to love him ever even if he marries her. She tells that she realized that Abir is in danger and felt that she can’t live without him. She feels she has hurt Maheshwaris a lot, and they would not feel that she isn’t their blood. She wants to go away before they make her out of their hearts. She tells Nannu that she doesn’t know Abir and her life’s future, but she knows for sure that she can’t ruin Nannu’s life. She wants to go away from everyone and not hurt them further.

Nannu stops her from going and tells her that he is the one who would be leaving now. He tells her that it was his fault to love her, despite knowing the fact that she just loves Abir. He feels much guilty about his actions. He wants to admit his mistakes and apologize. Abir senses what’s coming. He tries to stop Nannu from revealing his mistakes, since Mishti will be hurt and lose her good friend. The family stops Nannu from leaving. Jasmeet and Kuhu are much disappointed with Mishti. Jasmeet tells Abir that Meenakshi will never accept Mishti in her family. She doesn’t think Mishti’s future is secure. Nannu asks Abir to tell them the truth.

He praises Abir and asks Mishti to live her life with Abir. Mishti asks him not to go. Nannu tells that he loves Mishti and can’t see her marrying Abir. He wants to go away and stay alone. He feels sorry for himself. He doesn’t want to trouble them more. Kuhu goes to share Nannu’s sorrow. Abir apologizes to Maheshwaris. Meenakshi takes Mishti to the temple area. She makes a big apology to Mishti and Maheshwaris. She regrets the fact that she didn’t understand Mishti before. She swears that she just thought for her family’s good. She wants to forget the past and get Abir and Mishti married.

She asks Vishwamber to fix the marriage if he finds it suitable. She wants Abir to stay happy. She tells that she would have lost Abir, she is thankful to Mishti for saving him. She promises to keep her happy. Kuhu feels Mishti has broken Nannu’s heart. Nannu wants her to plan Mishti and Abir’s marriage. He accepts that he was wrong to love Mishti. Kuhu tells him that love isn’t a controlled emotional. Nannu makes a leave from their lives. Kuhu hates Mishti for hurting her family. Kunal is too happy that Abir is marrying his life. He wants to help Kuhu in the wedding arrangements.

He tells that Meenakshi has also accepted Mishti and everything went well. She is disturbed since none is thinking about Nannu. Rajshri and Vishwamber share their views on Abir’s proposal for Mishti. Vishwamber feels he has failed to secure Mishti’s happiness. He thinks Abir has hurt Mishti and even they have hurt her a lot. He isn’t sure that Abir would keep Mishti happy, since Meenakshi won’t let this get possible. He doesn’t want Mishti to live a troubled life under Meenakshi’s shadow. He has fears of a father.

Mishti pacifies him and is sure that Abir will be the best life partner. Vishwamber makes him realize Meenakshi’s truth. He doesn’t trust Meenakshi a bit. He asks Mishti to consider the past once again and decide if she wants to invite troubles by marrying Abir. Abir overhears his harsh take on the alliance and is much disturbed. He feels Vishwamber is right. Even he doesn’t trust Meenakshi. Kuhu, Jasmeet and Varsha fear that Mishti will break Rajvansh family as well. They conspire against Mishbir marriage.