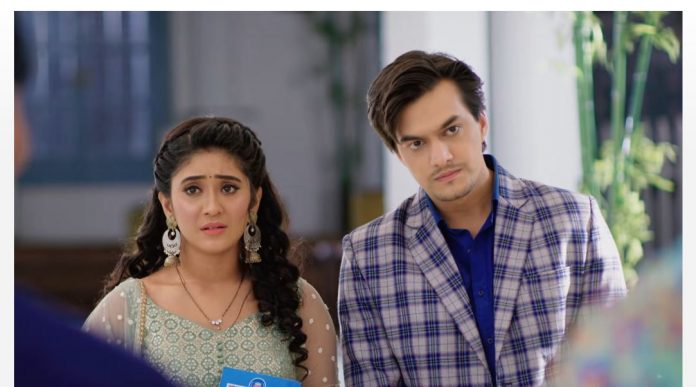 Yeh Rishta Kaira extreme decision shocks Goenkas Naira is much hurt to see Trisha in coma. She wants Trisha to get back to her bubbly self. She feels sorry that she couldn’t save Trisha and her smile. Kartik finds Naira crying a lot. He knows she is deeply hurt. He makes a call to the police to know the status of the case. He wants the evil doers to pay for their crime. He consoles a broken Naira. Naira wishes Trisha to get conscious and tell them about the molester. On the other hand, Abhishek comes home to meet Lav and Kush. He tells them that he knows Lav has recorded the incident on his phone to threaten Trisha, he wants to put the video online to make money from it.

He gets to see Gayu’s necklace kept open and plans to steal it. Naira vents her frustration, failure and bitter feelings out by the medium of dance. She gets too exhausted. She finds the kids playing in the lawn. She asks them about digging up the soil and hiding their toys inside. Kairav tells her that Lav has told them about fulfilling a wish by giving away their favorite things. She is about to know about Lav’s move, but Vansh diverts the matter unknowingly. Naira fails to find Trisha’s phone hidden under the pot patch.

Naira is happy when Kartik cheers her up with a beautiful effort. He tells her that Trisha will soon get justice. She wants to be normal so that she doesn’t hurt the family members in her bitterness. She apologizes to Kartik for taking the matter on her mind. Lav asks Kairav to steal Gayu’s necklace. Kairav doesn’t understand the need to steal. Lav fools him smartly and sends her to get the necklace. He asks Kairav not to tell his parents about their plan. Poor Kairav gets tricked easily. Naira gets hyper that culprit isn’t found yet. She asks the inspector to hurry up his investigations and find out. Inspector doesn’t give a word.

He isn’t sure to find the wrong doers, since there isn’t any solid evidence. Gayu and Samarth are worried after losing the costly necklace. Naira finds Kairav’s diary. She reads the complaint from the school. She informs Kartik about the forged signature. They confront Kairav. After much ado, they learn that Lav has signed to save him from scolding, but also asked him to get Gayu’s necklace. Kartik is shell shocked to know about Lav’s move. Naira feels its high time that they find out the truth. She goes to confront Lav and Kush. She asks the family not to misunderstand her.

She clears to Surekha that she is just asking them, instead of suspecting. She doesn’t want Surekha to create any scene like before. Naira confronts them for forging Kartik’s signatures. Lav and Kush get speechless when Naira reveals their other crime of stealing Gayu’s necklace. She asks them about troubling Gayu by hiding the necklace. Surekha knows her sons are wrong and covers up for them. She tells Naira that Lav signed to save Kairav from punishment. She clears that Gayu’s necklace was misplaced and now its found. Kartik scolds Lav and Kush for troubling them by their mischief, which is harmful.

Surekha scolds her sons and confronts them for the mistake. She wants to know the reason. Kairav apologizes to Kartik and Naira. They hug him with love. They find Kairav’s behavior changing a lot. They don’t want Kairav to spoil due to Lav and Kush’s bad company. They take the big decision to keep Kairav distant from Lav and Kush. Kartik gets helpless and compelled to support Naira, when they find Lav and Kush further teaching wrong things to Kairav. Surekha gets upset with Kartik and Naira for insulting her sons this way. Goenkas start feeling the consequences of Kaira decision. Surekha blames Kaira for ruining the family peace. Will Lav and Kush realize their huge mistakes? Keep reading.