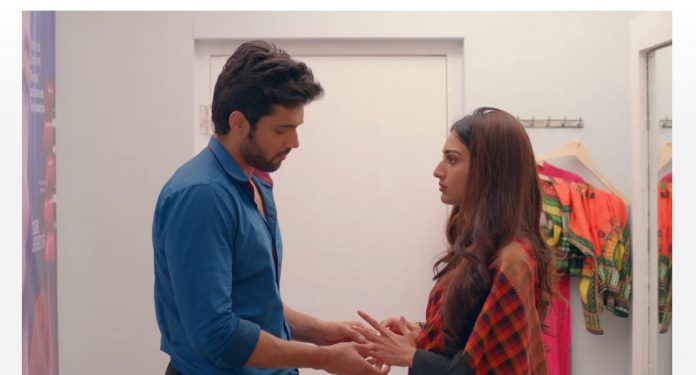 Kasautii Anurag confession Prerna unaware Viraj’s evil Viraj misses to see Anurag and Prerna together. He happens to see someone and thinks its Jagga. He goes to catch Jagga. He apologizes on seeing some other guy. Anurag and Prerna discuss about the engagement ring. He tells that he wants to select the ring for her if she doesn’t mind. Prerna knows that his feelings are growing for her. She lets him accompany her. Shivani finds them together and wants them to be alone. She wants to keep everyone away from the lovers. She misses to see Jagga, who quarrels with her. Jagga recognizes her and runs away from her sight. Shivani gets into an argument with Jagga’s wife Sudha.

Shivani’s mood spoils further after seeing Komolika. She is much hurt that Komolika is ruining Prerna’s life. She warns Komolika. She asks her not to dare to harm Prerna or her child. She wants to tackle Komolika. Komolika tells that Shivani can’t do anything, Anurag will fall in risk, nothing else would change. She tells that even police won’t take action against her due to her big contacts. Shivani finds Veena and Mohini having a bitter argument. Mohini insults Veena once again. Veena laughs on her small mentality.

She asks Mohini to buy some brains if she can, with her money. Mohini tells that money can help a person buy anything, that’s why Prerna was ready to marry Navin and then Bajaj. Veena and Shivani answer her. They tell that Prerna married Navin to save the ancestral house, while she married Bajaj just to save Anurag and Basus from destruction. Shivani reminds Mohini that Bajaj had ruined them and snatched even Anurag’s life. She tells that Prerna is their savior. Mohini feels insulted. She wants to take revenge on them. Anupam hears the argument. She tells Veena that he likes to hear her reply to Mohini. He tells that he has come to meet Anurag.

He looks for Anurag. Anurag and Prerna are at the jewellery shop. The jeweller Om thinks Prerna is still his wife. He recognizes her. He wants to show them best jewellery. He thinks that they are going to remarry. Anurag and Prerna have a moment. He makes her wear a ring for trial. The ring gets stuck. Anurag wants to make a confession of his love feelings to her. Prerna wants the moment to stop. Komolika calls him to meet. He gets scared to face his wife. He distracts Komolika. Viraj also looks for Prerna and calls her. Anurag takes Prerna along and hides.

Komolika checks the store again. She doesn’t find them. Anurag takes Prerna to the trial room for a peaceful moment. He tries so much to remove the engagement ring. He jokes that they will be engaged if the ring doesn’t come out. Prerna doesn’t think so. She asks him if this reminded me of something. Anurag confesses his feelings. He tells her that he came following her to the mall, and got Sonalika as an excuse. He doesn’t know if its love. He tells that they are best friends and he is possessive about her. He cares for her. He likes to be with her.

She is sure that he will soon gets his memory back. She asks him if the moment reminded him of some past. He doesn’t remember anything. She gives him time. She wants to wait for his recovery. Anurag finds Viraj coming. He rushes to the trial room and shuts the door. He gets terrified when he someone knocks the door. He tells Prerna that he doesn’t want Sonalika or Viraj to see them together and misunderstand. Om tells Mohini that Anurag has already bought a ring for his pregnant wife. Mohini can’t believe that he is with Prerna. Viraj’s truth surfaces. He wants Prerna dead at any cost.