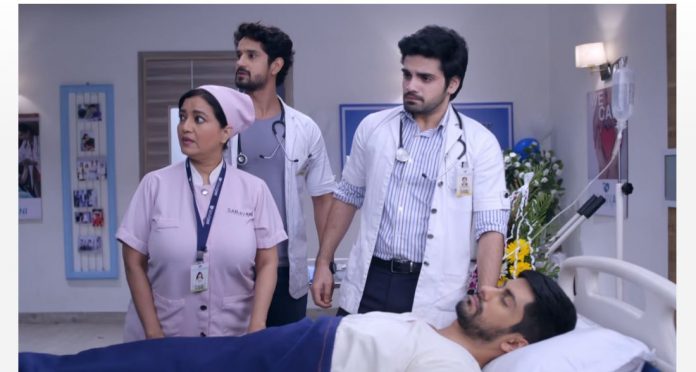 Sid faces death Sanjivani Critical twists Ishani takes charge Sid is under NV’s care. NV finds Ishani facing her sorrow and showing good signs of recovery from her depression. He wants Ishani to just forgive Sid and move on. He doesn’t think that the grudge in her heart will help her. Ishani expresses her hatred for Sid. She vents out her emotions and speaks up to Sid. Sid is in coma and hears her. He responds to her. NV thinks Sid will recover if Ishani treats him. He wants to decide for betterment of both Sid and Ishani. He takes a decision to shift Sid back to Sanjivani. He acts sleeping, while Ishani rushes to weep. He finds her crying and is helpless. He wishes she comes out of her depression soon.

Later, NV reveals his decision to Ishani. He calls Rahil home to send Sid. Rahil is much annoyed on seeing Sid in NV’s house. He tells that Sid needs good medical care. He confronts NV for his duty towards Sanjivani patients. He accuses NV for playing with Sid’s life. NV tells him that he knows the worth of a human life. He has lost his dear one and doesn’t want to share it with him. Rahil reproves Ishani for her stupid act to leave Sid at the fraud nursing home. He tells that she is taking revenge on Sid, which isn’t fair. He feels the doctor in her is dead. NV asks Rahil to just take away Sid. He assigns Sid’s case to Rahil.

Rahil is thankful that Sid is getting sent to Sanjivani. He apologizes to NV. NV explains the need of his decision to Ishani. He wants her to do her duty as a doctor and save lives. He tells that Sid has left from their home and now Rahil will attend him. He advises her not to forget her duties. NV gets a heart patient to Sanjivani in the same ward where Sid is present. He assigns the case to Rishabh and Ishani. Ishani is lost on seeing Sid. She loses courage and confidence. Sid reacts when Ishani touches his hand.

Sid gets critical and his heartbeat begins to get low. Rahil cries for Sid. He wants to save Sid. He feels helpless that he isn’t succeeding in his aim. NV finds Ishani away. He realizes that Ishani has seen Sid in critical condition. He encourages Rahil to treat Sid well with a calm mind. He looks for Ishani. He finds her and gets her to the temple. She feels everyone hates her and would blame her. Rahil really blames her for Sid’s state. Ishani doesn’t want to go to the staff. NV tells them that Ishani is fighting depression, if her wounds aren’t seen physically, it doesn’t mean that she isn’t ill.

He asks Rahil to pray for Ishani as well, since she is also a patient like Sid. He tells that Ishani can’t risk Sid’s life intentionally, she is also in much pain like Sid. He asks Rahil to wish for Sid and Ishani’s recovery from their illnesses. Sid’s heartbeat falls flat. Rahil and Rishabh try hard to revive him. NV feels just Ishani can save Sid’s life. He urges her to do her duty and save her patient. Ishani takes charge and attends Sid. She wants to save Sid some how. Ishani succeeds in her task and saves Sid by her smart timely move.