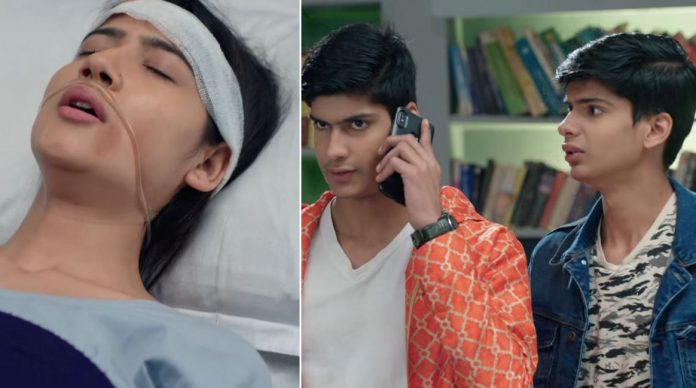 Yeh Rishta Trisha murder attempt Lav heinous act Kartik and Naira are glad that their son has realized his mistake and is regretful too. They don’t punish him and forgive him. Naira asks Kairav to play with Vansh. She wonders why did Surekha lie and hide about Gayu’s necklace. She knows the fact that Kairav had taken the necklace and given to Lav. She can’t digest that Surekha has mentioned about the necklace getting misplaced. She asks Kartik the reason for Surekha’s lie. Kartik gets angered to answer her. He is actually fed up of clearing Lav and Kush’s name. He doesn’t want Naira to doubt his brothers. Naira doesn’t understand what is angering Kartik so much.

She decides to apologize to Surekha and also Lav-Kush. Kartik doesn’t want Naira to go deep into the matter, since family may get hurt. On the other hand, Surekha confronts Lav and Kush for stealing Gayu’s necklace. She asks them the reason for doing this. They tell her that they need money to give it to Abhishek, since Abhishek is blackmailing. Surekha wants to know the reason for the blackmail. Lav lies to her that Abhishek recorded Trisha and his argument and also Trisha’s move to slap hm. He tells that respect means a lot among boys group, they didn’t want Abhishek to upload the video and insult them.

He tells that Abhishek wants money in exchange of the video. Surekha can’t believe that their rich friend is so cheap. She assures to handle the matter. She gives them a cheque. Naira finds Surekha giving much money to Lav and Kush. Surekha clarifies that the money is given for studies. Naira gets convinced. Kairav behaves weird and starts biasing between girls and boys. He tells that that he won’t keep his plate in the kitchen. Naira gets miffed and also worried. She didn’t raise Kairav with such a bad thinking supporting inequality. She asks Kartik to talk to Kairav. They get a call from the school.

Kairav’s teacher speaks to them and alerts them about his changed behavior. She asks him about someone teaching him to differentiate between boys and girls. Naira didn’t expect this to happen. Kartik assures that they will talk to Kairav. Kartik and Naira fake a fight to explain Kairav that both boy and girl have the same rights, duties and dreams. They don’t want Kairav to walk on the wrong path.

Kairav watches their fight and then sorts it out. He asks them to stay smiling. He agrees to respect girls. Naira tells him that he is disrespect girls, then it will be her insult. He apologizes to them. Kartik asks Naira not to worry for Kairav. She is afraid that he is walking on the wrong path shown by family members.

Lav gets bored at home. He teases the servant. He asks Kairav to get fun as well. Kartik stops them from insulting the staff. Kartik scolds Lav and Kush. Surekha feels Kairav shouldn’t be with Lav and Kush, since he is too young to spend time with teenagers. Naira doesn’t tell them that Lav and Kush are wrong to teach bad things to Kairav. She also feels that Kairav should be away from his brothers. She tells the same thing which Surekha advised. Surekha takes the matter in a wrong way. She creates an issue again. She asks Goenkas to support Lav and Kush, who can never do wrong. Dadi asks Naira not to suspect their values. Naira fails to explain her concern.

Surekha cries a lot. Kartik doesn’t support Naira. He asks her not to divide the family. He convinces her to give one chance to Lav and Kush. He promises to support her if his brothers commit mistakes again. Lav attends the doctor’s call. He learns that Trisha is recovering and is out of coma. Naira also learns that Trisha got conscious. She runs to share the news with Kartik. Lav, Abhishek and Kush rush to the hospital to meet Trisha before Kartik and Naira arrive.

Lav finds Trisha against them. Abhishek advises Lav to kill her. Kush stops Lav from committing the heinous crime. Lav and Kush fight against. Trisha gets a huge shock and wants to shout for help. Kartik and Naira just reach in time. Will Lav kill Trisha to hide his molestation crime? Keep reading.