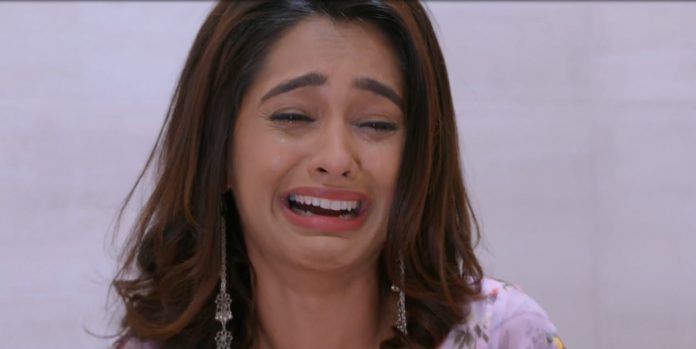 Kumkum Bhagya Prachi insulted Raabta Malhar surprised Kalyani prays to Devi Saraswati and asks her to give her special idea to reply to Malhar’s love confession to her. She prays to get some unique idea. Malhar hears her and makes 20 Rs fall on Kalyani. Kalyani asks Devi Saraswati what she wants to sign by giving her 20 Rs note. Malhar thinks one kiss (Ekkiss in hindi) and smiles thinking Kalyani understands it. Kalyani says I understand your sign. Later, Kalyani plans a romantic surprise for Malhar to confess love to him.

Malhar waits for a kiss. Kalyani leaves from there and plans special reply to him. She runs out of the house happily. Anupriya and Atharv reach the temple and see Rachit blackmailing Swara. Anupriya tries to save Swara and shoots at Rachit. Kalyani gets shocked. Malhar reaches there as well.

Kumkum Bhagya: Aaliya tells Vikram and Pallavi that they shall not trust Prachi anymore. She says we can’t figure out when she lies and when she says truth. She says it is possible that she came here for a conspiracy. She brainwashes Ranbir’s parents against Prachi. Ranbir knows Prachi’s truth well and defends her, just like Abhi does.

Abhi too knows that Prachi never lies and never does wrong. Abhi shouts at Aaliya to stop her. He asks Aaliya what was the need to say all that. He tells that even if there is no proof, he can trust Prachi. Aaliya insults Prachi. Prachi gets hurt and goes out. Ranbir follows her. Abhi takes a stand for Prachi and asks Aaliya why she said that. He tells that he can give guarantee that Prachi is with Ranbir and will not leave him. Prachi tries to show the video, but finds out that it is deleted. Abhi declares that he trusts Prachi. He says video is not found, but Prachi is not wrong. Rhea and Aaliya get upset.

Best Comment by Adz:
We just want Rhea to get caught already. This is totally rubbish.