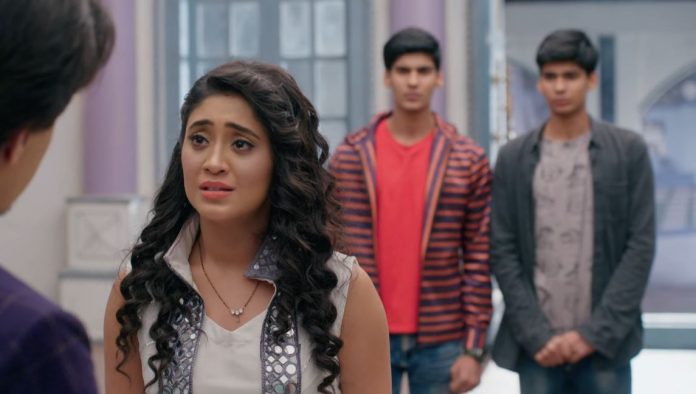 Starplus Yeh Rishta NEW Huge unexpected twists coming Naira is eager to know about the culprits’ name so that she can serve justice to Trisha soon. Lav and Kush miss their flight. They converse about the consequences if they stay back home. They fear that Trisha will recover from paralysis and name them as the culprits. Kairav and Vansh happen to meet them and overhear their conversation. The little kids don’t understand much about it. They tie farewell bands to Lav and Kush’s wrist. Vansh asks about their opinion about Trisha. Lav and Kush change the topic and divert them. They don’t want the kids to hate them after knowing their crime.

Lav tells that the family will hate them and never forgive them if they know their misdeed. Kush is equally scared. He asks Lav how would they leave from the house when their flight is cancelled. Lav tells him that they can still go by road. Naira makes plans to get the culprit’s name from Trisha some how. Lav tells Kush that they will leave before Trisha wakes up in the morning. Naira gets a doubt on Lav on seeing him. She doesn’t want to suspect her family members. Naira gets pacified by Kartik. Kartik assures that they will soon find the truth. He is also putting much efforts. Naira gets a nightmare. It breaks her sleep.

She goes to Lav and Kush’s room to talk to them. She checks Lav’s phone to find Abhishek’s message. She isn’t certain and doesn’t want to give a direction to her doubt. She wants to find the truth from Trisha. Lav and Kush hurry to leave from the house. They bid bye to the family members and promise to come back soon in their next holidays. Kartik gets emotional that they are going. He feels they haven’t celebrated well because of the tensions at home. He asks them to meet Naira before going. Lav and Kush want to leave soon. Surekha assists them in escaping from the family’s doubt.

She tells Kartik that Naira isn’t showing any interest in meeting Lav and Kush. She sends her sons away. Naira wakes up Trisha and compels her to help her find the truth. She asks Trisha about the culprit’s name. She confirms from Trisha about Lav and Kush. Trisha signs that Lav and Kush are the molesters. This shocker breaks Naira’s heart. Lav and Kush go far from the house and think they have finally got saved from Trisha’s chapter. They think of enjoying their lives, without thinking of the life they have forced on Trisha’s fate.

Naira chases the evil doers. She boldly catches them to confront them. After a huge confrontation, she makes them realize their mistakes. She lectures them on failing the family hopes and values. Kush gets an asthma attack by stress and fear. Naira looks after him to help. She doesn’t spare them. She gets them home to reveal their crime to the family. She can’t believe that they are the molesters, they lied to the family and ruined an innocent girl’s life. She reveals the shocking news that Lav and Kush are the molesters. Kartik believes her, but the family doesn’t.

Surekha asks the family to not believe Naira. Goenkas are in big shock. Lav and Kush deny the blame. Naira wants Goenkas to know the truth from Trisha itself. She takes them to Trisha and asks the culprits’ name. Goenkas get shattered when Trisha names Lav and Kush. They didn’t know that Lav and Kush can stoop to this level. What will Naira do? Will she get Lav and Kush arrested to get justice for Trisha? Keep reading.