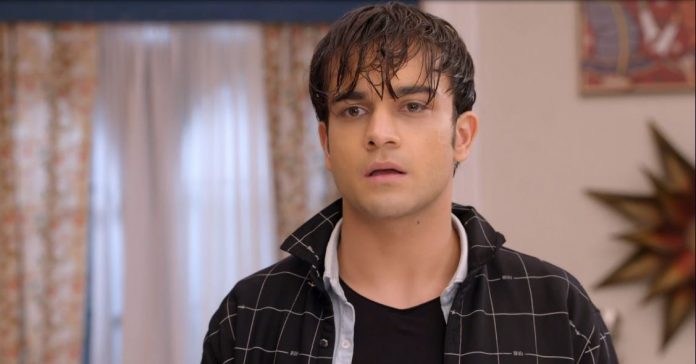 Zee Kumkum Bhagya Romance side effects for Ranbir Rhea is super worried that she will get caught by Abhi. Aaliya calms her down and asks her to remember that she isn’t wrong. She tells Rhea that fighting for love isn’t wrong. She tells that everything is fair in love and war. Aaliya tells her that she will be proud to win her love. Rhea gets misled by her. She thanks Aaliya for motivating her. Aaliya tells that all the good people do such things. She calls Rhea a good hearted person. She asks her to go to stop Abhi from meeting Maya. Rhea calls Abhi to stop him. She tells him that she is also coming with him. Abhi thinks Rhea is doing a lot to get a clean chit for Ranbir. He feels Rhea loves Ranbir a lot.

Ranbir likes to be with Prachi. He thinks its true love. Abhi doesn’t want anyone to come between Ranbir and Rhea. Ranbir tells Prachi that someone is going to propose her today. She gets a red balloon. He tells her that she should keep it . Abhi finds Ranbir with Prachi. He realizes that Ranbir is going to drop her home, they are just friends. A lady asks Abhi to buy flowers for his lady love. Another lady asks Ranbir to buy the balloon and gift to his friend, if she accepts it, then she will become his girlfriend soon. Ranbir likes to hear good things from the lady and thanks her. He buys the balloon and gifts it to Prachi.

He asks Prachi to accept the balloon. She keeps it. Abhi misses Pragya. He goes to meet Maya. He doesn’t want to wait for Rhea. Rhea messages Maya about him. Maya gets worried. Abhi asks her to open the door. She threatens him. He warns her to stay away from his family. Rhea reaches there. Abhi tells that Maya isn’t opening the door since she is scared. He knows Maya is wrong. Rhea bangs the door. She tells Abhi that she forgot to get the purse. Abhi pays for Rhea’s cab. He finds Rhea’s car outside Maya’s house. Ranbir and Prachi have a cute banter on the way. He tells that he didn’t give it to anyone till now. She tells that he isn’t a serious type of guy.

He starts the interesting love story. He tells that he likes someone and she is special. She asks him to share the secret with him. Ranbir doesn’t tell that its her. Abhi suspects Rhea and demands to know the truth. He asks her to confess the truth, else he will find it himself and maybe he will know many things. Rhea breaks down and apologizes. He wants to know what she did. He asks if she did wrong with someone or someone wronged her. He fears that Aaliya is making Rhea commit wrong things. He promises to help her if she tells the truth.

He tells that he will fix everything if she confides. Ranbir feels the moment stops and he gets more time with Prachi. He thanks her for the good time. She thanks him for the icecream treat. They get drenched by the sudden rains. She enjoys the rains. Ranbir likes to see her happy. They have a romantic moment. Rhea confesses that she has made a big mistake. Abhi tells that everyone makes mistakes. He wants to know the truth. She fears that he will hate her. He tells her that he will not hate her. He wants Rhea to share the truth and not drag the lies. Rhea tells him that she wanted to give money to Maya and save Ranbir. She lies to him.

Abhi doesn’t think she didn’t do anything wrong. He praises her for having good intentions for Ranbir. He feels proud of her. He asks her to share things with him. Sarita gets Prachi home after seeing them romancing in the rain. She yells at Ranbir and demands him to leave. Prachi tells that Ranbir is just her friend. Ranbir clears the matter. Sarita threatens to call his parents. Sarita seems the villain in his love story.