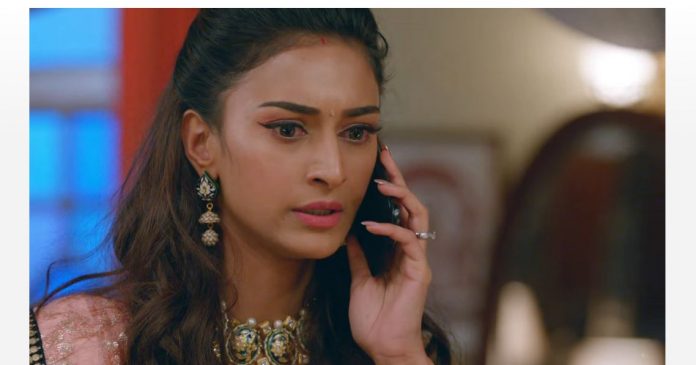 Kasautii Prerna Anurag Rocking rescue High dose drama Prerna is restless after getting the bad omens. She foresees Anurag in danger, but doesn’t do anything much about it, until she gets the news of Anurag really fallen in danger. Shekhar asks Dadi the reason for her upsetness. Shivani has already told Dadi that Prerna is not going to marry Viraj. Dadi wants Anurag in Prerna’s life. She tells Shekhar that she feels Viraj isn’t a nice guy. She suspects Viraj’s intentions. Shekhar trusts Viraj and asks her not to get such negative thoughts in mind.

Dadi tells that she has planned a puja to end her doubts, and once the puja completes, her doubts and questions will get resolved. She asks him to get a raw coconut for the puja. Shekhar and his friend Tushar go to the market to buy a coconut. They come across the same mechanic who had cut the brake wires in Anurag’s car and made it faulty. Ronit drops the mechanic and asks him to meet Komolika after some time. The mechanic thinks he has made easy money. He boasts of his smart choices. He regrets that a pregnant girl will be dying in the car accident. Shekhar overhears her and feels he is talking about Prerna.

For the first time, Shekhar is seen in a heroic avatar. He bashes up the mechanic and demands to know the truth. The mechanic speaks up and tells that Prerna is that girl who will be dying now. Shekhar is shell shocked. His phone gets damaged during the fight. He reaches the family and tries to make calls to Prerna, so that Prerna doesn’t drive Anurag’s car. He tries hard to connect to them. He finally connects with Mahesh and tells about the brakes failure conspiracy against Prerna. Shivani and Prerna get worried and understand that Komolika is behind the conspiracy. Mechanic runs away to Ronit.

He doesn’t tell that he has told the truth to Shekhar. Shekhar asks Prerna not to drive the faulty car. Prerna panics realizing the danger on Anurag’s life. She tells Veena and Shekhar that Anurag has gone to the market to get shoes for her. She fears that Anurag’s life is in trouble. Anurag drives the car and the realizes that the brakes aren’t working. Prerna doesn’t know what to do. Komolika thanks Ronit for making her dreams come true. She tells that her life will be on track when Prerna dies. He tells that he has seen Prerna leaving in the car and the good news will come soon.

They plan to celebrate it later. Komolika tells the mechanic that she is really pleased with his work, she will pay him double. She asks him to meet and get double cash for his work. Ronit scares him about Komolika’s anger. The mechanic is afraid of her wrath. He plans to take money and go somewhere far to hide. Prerna calls Anurag and tells that she knows about the brakes failure. She offers help. She gets his location. She tells that she is going to come to him. Anurag prays for Prerna and himself. He doesn’t want her to come for his sake. Prerna controls her stomach pain.

She calls Komolika to reprimand her for the wicked move. Komolika thinks Prerna is dying and called to take help. Prerna tells that she is at home and Anurag left in the car. She asks for some way to save Anurag. Komolika doesn’t believe her a first. She doesn’t want to tell her any solution. Prerna gets frustrated by hearing her nonsense. Komolika learns that she is really home. She wonders if Anurag is in real trouble. She slaps Ronit and the hired aide/mechanic. She yells at him for risking Anurag’s life. Ronit can’t believe this. She learns that Shekhar is aware of the truth.

Prerna apologizes to Veena and leaves from the house. She has to save Anurag. She calls Anurag and connects him. Prerna struggles to save Anurag. Mohini learns Prerna’s big effort once again. She worries for Anurag’s life. She informs Viraj about Anurag falling in danger. Viraj doesn’t want innocent Anurag to die. Prerna will manage to save Anurag. Keep reading.