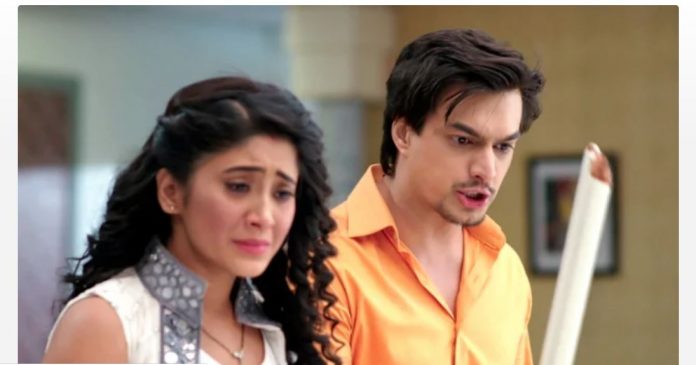 Yeh Rishta Kush suicide attempt Naira shocks Goenkas Kartik loses his senses after knowing his brothers’ crime. He didn’t know that his young brothers have so much filth filled in their minds. He doesn’t listen to Surekha and bashes up Lav and Kush badly. Lav and Kush try to get help from Surekha and Naira. Surekha cries for them and pleads to Kartik to spare them. Kartik doesn’t want them to go free after ruining a girl’s life. He asks Lav and Kush if Goenkas have taught them such wicked things that they forgot their humanity. He reprimands them for their evil move. He didn’t wish Trisha’s life to sink in sorrow. Naira doesn’t pity Lav and Kush, who denied the blamed and proved her wrong cunningly.

She tells them that they aren’t kids now that they didn’t realize their crime. She tells that they will be punished. Akhilesh and Manish are much hurt to see such a bad deed from their family members. Dadi too wants Lav and Kush to bear the punishment. Naira tells that Trisha will be undergoing the trauma forever. Kartik also feels that Trisha won’t be able to forget the incident, she may never trust anyone now, she won’t be able to feel free and happy. He holds his brothers responsible for this. Lav and Kush apologize for their deed. Naira doesn’t want them to fool the family again. Kartik declares that he will strictly punish Lav and Kush.

He locks them in their room. Kush feels guilty and regrets his actions. He didn’t wish to support Lav. Lav doesn’t change even after seeing the family’s upset faces. He wishes that Trisha died in the accident. Kush asks him to shut up and accept his mistake. He doesn’t think that anyone can save them. Lav sees Kush getting an asthma attack. Lav gets an idea after seeing his state. Kartik hurts his hand after beating his brothers, whom he loved as his sons. He vents anger on himself. He is much sorrowful knowing their crimes. He feels shattered.

Naira undergoes the same pain. She consoles Kartik. They recall the times when they used to guide little Lav and Kush. The family is much sad. Akhilesh blames himself. He feels he has been wrong to have an affair with Liza and then cheat her. He tells the family that he cheated all of them, that’s why his sons have walked on the same path of wrong. He slaps himself and sinks in guilt. Manish stops him from blaming himself. He tells that Lav and Kush failed the entire family, not just their parents. Suwarna wants to talk to Kartik about Lav and Kush. Surekha cries for her sons.

Kairav and Vansh learn the matter partly and want to know what actually happened. They don’t get to meet Lav and Kush. Kartik and Naira assure Trisha that she will be safe and also get justice. Trisha asks Kartik if he will forgive his brothers. She shares her trauma and pain because of Lav and Kush. Kartik feels miserable. Naira promises to get Lav and Kush punished by the law.

She tells that Trisha is also close to her and she has to teach a lesson to culprits. Dadi asks the family to think of severe punishment for Lav and Kush, so that they come back on the right track. She doesn’t want anyone to know their family matter.

She wants them to not involve the police. Naira thinks otherwise. She tells them that she will get Lav and Kush arrested. Goenkas are in for a shock when Naira turns too serious about the legal punishment. Surekha begs her to not ruin Lav and Kush’s lives. Naira asks them to think of Trisha as well. She finds Surekha insensitive towards Trisha. Kartik understands Naira’s concern. But doesn’t want her to call the police. Naira gets into an argument with the family. Kartik feels Naira should have discussed with him.

The family also feels the same. The police arrives home to arrest Lav and Kush, while Kush comes up with a suicide drama on Lav’s saying. Kartik and Naira save Kush from making the suicide attempt. Goenkas request Naira to not get Lav and Kush arrested. What will Naira do now? Keep reading.