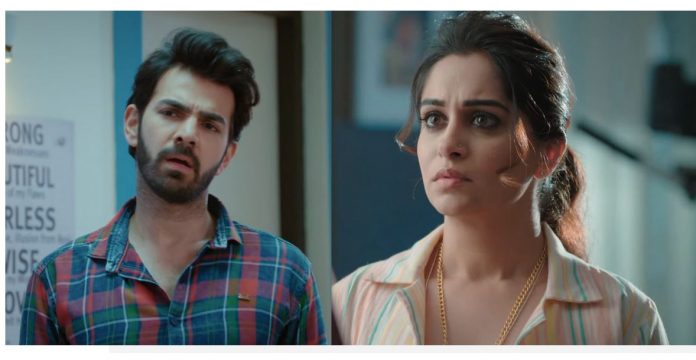 Kahaan Hum Starplus Worst rating shocks Unexpected roll off Sonakshi challenges Rohit that she will become more successful than him and show down Sippys. It seemed like she will be reaching the peak of her success and teach a lesson to Nishi. It all falls flat because of a shocking change in the story. Sonakshi’s life moves ahead, but in an unexpected terrible way. When she was back on the sets to work hard and bag big projects, its now shown that she is thrown out of her show Kahani Parvati Ki for the least expected reason. Netra removes her from the show due to the rumors about Rohit and Sonakshi’s separation. This twist seems unacceptable.

Sonakshi gets punished after the media hypes about her separation. She fails to concentrate on her career. Her dreams shatter when super hit role Parvati is given to someone else. Sonakshi is shockingly seen fighting the financial mess in her life. Netra celebrates her show’s success with her team, the new cast who has replaced Sonakshi and Sumit in the show. Netra has no regrets to kick out Sonakshi from the show, when the show was losing TRPs because of Sonakshi’s headlines every day. Netra’s character is also seen different, since she turns hopelessly disgusting. The media congratulate Netra for the success.

Netra introduces the new Parvati and Kunal. Netra doesn’t even miss Sonakshi. She is happy that defamed Sonakshi is away from her sets. The media asks her about Sonakshi Rastogi. Netra doesn’t have any idea. She tells that Sonakshi is divorced now and she had to replace her. Sonakshi is seen meeting Suman in the police station. Suman is jailed after taking huge loans. Suman has invested Sonakshi’s savings and also took loans for the housing project. She regrets that the builder has cheated them and took away all the money.

Suman is disappointed with her life. Sonakshi assures to help her. Suman gives her a reality check. Sonakshi knows hat she neither has any work nor any money to help her mother. She still has her talent and courage. She tells that she will do anything to bail out Suman. Suman knows that the lawyers are demanding much fees for her bail. Sonakshi seems too helpless, unlike her confident character seen in the last episode. Sonakshi meets the lawyer and pleads him to bail out Suman. The lawyer demands the fees. He speaks practically and asks her to deposit his fees first. He asks her to hire anyone else.

Sonakshi is confident that she will arrange money. He asks her to take help from Sippys. Sonakshi is ready to die but not take any help from Sippys. Elsewhere, Pari is worried that her baby bump is showing up. Pari wears loose clothes and covers up the baby bump. Sonakshi meets Pari and reveals about the lawyer’s demand. Pari advises her to take help from Pulkit, Netra or Sumit. Sonakshi doesn’t want to disturb Pulkit during his higher studies. She calls Netra for help, but gets a shocking rude reply. Netra ends their friendly terms after firing Sonakshi from work. She doesn’t want to help Sonakshi. Sonakshi gives auditions for cameo roles.

She isn’t any famous actress as of now. She accepts a small role to get money. She meets the producer and tries to take an advance to bail out Suman. The producer gets miffed that she is asking for a big advance right on the first day of work. He decides to not sign her. Sonakshi loses hope. She recalls the times she had been successful. On the other hand, Nishi is seen controlling the Sippy family and hospital. She is happy to rule over everyone. A patient’s parents meet Nishi and request her to get their son operated by Rohit. Rohit comes home at the same time and overhears their conversation. He learns that the patient is Sonakshi’s fan.

Rohit learns that Sonakshi had promised them about the surgery long time back. He wants to keep Sonakshi’s word and makes arrangements for the surgery at a private clinic. Rohit still believes in humanity and good work. He thanks nurse Tulsi for assisting him by taking an off from Sippy hospital. He saves the patient’s life and expresses his pain to the patient’s parents. He is much guilty that he couldn’t keep his wife happy and protected from his own family. He feels he is a weak person, a loser in life, who couldn’t keep his word. He regards himself a bad person, since he has wronged Sonakshi’s life. The patient’s parents know about his separation. They bless Rohit and Sonakshi, that their problems end soon.

Veena forgives Naren for his cheat and looks after his health. Naren is seen recovering. He is out of coma and tolerates Nishi’s filth in the family. He isn’t able to talk and tell Nishi’s truth. He deeply regrets that Nishi has ruined Rohit and Sonakshi’s lives by accusing and separating them. Helpless Naren, fragile-minded Veena and then over-pampering husband Rohan is seen with hopeful Tanya. Nishi controls all of them by her sweet words. She also plans Akash and Deepa’s marriage to bring happiness back in the family. She has attained the Sippys property and power, which she always wanted. She cares nothing for Rohit. Veena and Sukhmani pity Rohit, who isn’t like before now.

Later, Pari meets her gynaecologist. She plans to hide her pregnancy until she succeeds in blackmailing Rohan. Sonakshi is sure that she will work hard and get her career on track. She gets pressurized by the financial needs. The producer’s PA tells her that he knows her problems and may help. He advises her to perform in a party to get the required amount. Sonakshi is helpless to agree since she has to bail out Suman. Rohit gets invited by his friend. He looks ahead to meet his friends so that he stays away from his family. He finds Pari at the hospital, but doesn’t learn about her pregnancy.

Rohit gets a shocker of his life when he finds Sonakshi dancing in the mens’ party for the sake of money. It proves that he didn’t track her life to protect her from sorrow, as he decided before. He wanted to ruin himself, but make Sonakshi prosper. Rohit wasn’t aware of Sonakshi’s defamation, tough times and helplessness. Maybe his alcohol addiction sank him completely. Rohit and Sonakshi face each other in the old moment. What will Rohit do next? Keep reading.

The episode disappoints by the sudden change in track. Sonakshi’s miserable state can be reasoned out to show a low phase in an actress’ life. She could still make wise choices in her life. It makes you think, what, when and why…. Character changes are worse. The charm of Ronakshi seems lost somewhere. Not expected to see an instant opposite twist after Sonakshi’s bold avatar in the last episode. From bold to helpless damsel in distress, one can guess what’s wrong with the writers…. Only good thing is Sonakshi’s house-help Munya, who didn’t leave non-paying poor Rastogis in their tough times like everyone else!

Best comment by Vineeta:
Pari, instead of ruining Rohan and Tanya’s life, she can join hands with Ajith to solve this mess. Writers, request you not to show us the same’ revenge, hatred and leap track’ that others serials show us.

Reviewed Rating for this particular episode: 0/5
This rating is solely based on the opinion of the writer. You may post your frank opinions on the show in the comment section below.