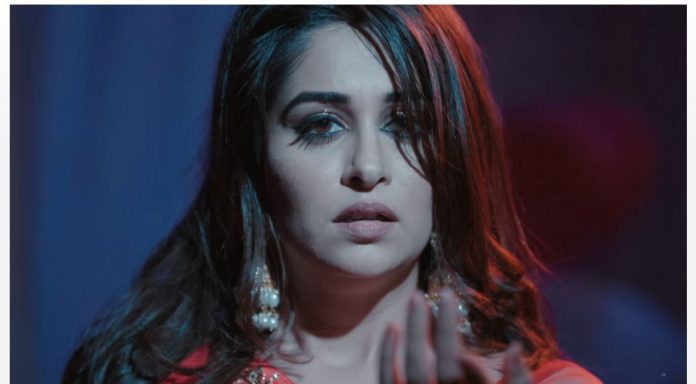 Starplus Ronakshi Kahaan Hum Pari pregnancy shocker Sonakshi accepts the dance performance offer for the sake of money. She wants Suman to return home soon. She is hurt that she is helpless to perform in the party. As per the need, she gives her nod. She informs the lawyer that she will get the money. She asks him to make the bail papers. Rohit meets his friends and tells that he can’t miss the drinks. His friend tells that he has hired an actress for entertaining them by a dance performance. Rohit gears up to watch the performance. Sonakshi performs dance. She sees Rohit there.

Rohit gets a huge shock on finding Sonakshi as the dancer in his friend’s party. He can’t believe that she is facing a financial crisis that she is too helpless to take up such party dance offers for money. He feels hurt and controls himself. His friend apologizes since he didn’t know that Sonakshi is Rohit’s ex-wife. Rohit acts bitter once again. He tells that Sonakshi doesn’t matter to him now, he has no objection with whatever he does. Sonakshi doesn’t want to leave on seeing him, since she has to take the money for Suman’s sake.

She wants to complete the dance performance. Rohit wants to fulfill her financial needs. He wishes that she doesn’t dance. He tells his friend that he isn’t going to see her performance, he will better leave the party. His friend doesn’t want him to leave. He relieves Sonakshi from the performance. Sonakshi loses the chance to earn money. She is much stressed that Suman is waiting for her. She wanted to get Suman bailed. She shares her problems with Munya. Sonakshi gets surprised when the lawyer arrives to pick her from home and head to the court for Suman’s bail.

Lawyer tells that she has kept her word and sent money on time, he will bail out Suman. She apologizes to him. She learns that Sumit has paid the money to the lawyer. She thanks him with much respect. Sumit asks her not to be formal and spoil their friendship. He tells that he will always support her. Sonakshi and Pari go to the court for the hearing. Suman is in jail since three months after her business partner Mr. Goyal duped her and fled with the money. The lawyer appeals for her bail, since she is a heart patient. Rohit comes to the court to help Suman, but acts like he is against Suman. He speaks in an insulting way and hurts Rastogis.

He calls Suman a greedy woman, a real culprit, who should get punished. He gives the lead to the court about Goyal, who has built a lavish complex in London and enjoying his life. The lawyer thanks Rohit for unknowingly helping Suman by revealing Goyal’s whereabouts. Suman gets the bail with Rohit’s help. She is angry that Rohit tried to get troubles for her. Sonakshi asks Suman to be with Pari and avoid Rohit. She goes to Rohit to scold him. He tells that Suman has ruined Sippy family and hurt his mum so much.

He tells that he hates Sonakshi and will surely take revenge. She can’t believe that their love has turned into bitter revenge. Rohit asks her to get lost. She feels their love wasn’t for real. He feels sorry to hurt her heart. He has done everything to save Suman. He wants to encourage Sonakshi and be her strength, being far. He loves Sonakshi a lot. He sends a heart shaped balloon for her and also conveys his love for her.

He thinks to have another identity to help Sonakshi and build her career afresh. He gets a shock on finding the truth of Pari’s pregnancy. He feels Rohan ruined Pari’s life. What stand will Rohit stand for Pari? Will Sonakshi and Suman learn about Pari’s pregnancy? Keep reading.