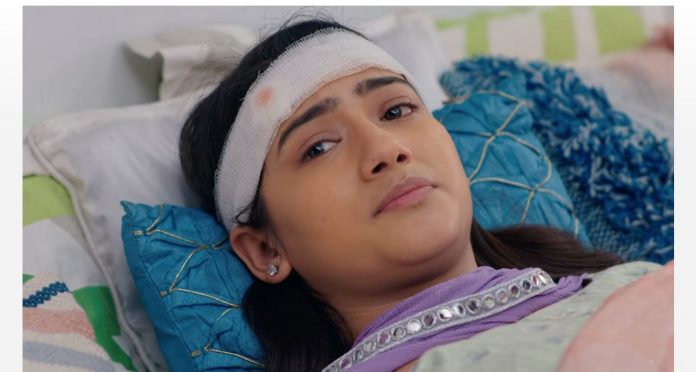 Trisha decision Yeh Rishta Today Kartik Naira await Kush fakes a suicide attempt just on Lav’s saying. Lav thinks they can compel the family to forgive them by compelling them. Kush tells that he will jump down the balcony and give up his life, since he is much guilty to hurt the family by his shameful act and can’t see their reputation getting ruined. He acts that he can’t see them getting humiliated by the society after the police arrests them for the crime, so he has decided to kill himself and save them from defamation. He puts the entire family in huge tension. Lav asks him to continue the drama until the family compels Kartik and Naira to forgive them for Trisha’s molestation.

Lav has no regret for his misdeeds and misleads Kush as well. Surekha cries a lot seeing her son in danger. She requests Kush to not hurt himself. She threatens Naira that she won’t spare her if anything happens to Kush. Kartik doesn’t want anyone to blame Naira. He tells that Naira isn’t at fault. Akhilesh asks Kush to see Surekha’s state getting bad. He wants Kush to come down and end the tension. Kartik and Naira rush to stop Kush. Kairav wants to know why is everyone shouting like this. Naira asks Kairav and Vansh to stay inside the room. Kush tells that he may really faint and fall down.

He wants to end the drama. Lav asks him to not end it so soon since the family will accept their condition soon. Kartik and Naira reach Kush and ask him to not commit suicide. Kartik tells that even if Kush falls, he won’t die, but get his bones broken, which will make his life miserable. He gets emotional and tells that he already lost Shubham. Kartik and Naira emotionally convince Kush to come to them. Lav didn’t wish Kush to change his mind. Kairav and Vansh learn about Kush’s suicide move. They don’t understand it though. Lav and Kush apologize and try to win the family’s sympathy.

Surekha accuses Naira for putting Kush in so much fear that he chose this option to end life. Naira asks Surekha not to encourage them to do wrong by supporting them. Surekha hurts her heart by blaming her for Shubham’s death. She tells that Naira would have killed Kush today. The family is shocked to hear such taunt from Surekha. Naira breaks down. Kartik calls Surekha wrong. He supports his wife. He doesn’t blame Naira. He tells that Kush has made the mad attempt himself. Naira reminds them about Mansi, who was molested by Purushottam. She tells that they have taken a stand against him and got him punished, when he was also a relative of Goenkas.

She asks Surekha to think as a woman first and then as a mother. She asks Surekha if she can forgive someone, being in Trisha’s place. Surekha gets speechless. She still wants her sons to get spared from the police. She asks Naira to punish Lav and Kush at home, but not involve the police. Naira fails to explain her that Lav and Kush’s crime isn’t easy and maybe they aren’t regretting for real. She cries out her pain on seeing the mothers supporting sons on their wrong deeds, instead teaching them to respect and protect girls. She tells Surekha that they should teach the boys first, rather than teaching the girls. Surekha apologizes to Naira.

She is ready to apologize to Trisha and take her responsibility. Naira gets emotional in her speech. She feels Goenkas failed to teach values to Lav and Kush. Police comes there and Goenkas think Naira called them. Naira tells that she didn’t call the police. Inspector wants to take Trisha’s statement. Surekha and Dadi lie to mislead the police. They request Naira to not share anything with the police. Inspector meets Trisha, on knowing that she is conscious. He wants to know about the culprits. Trisha tries to tell the incident. Surekha is worried.

Trisha feels unstable suddenly. Naira asks the Inspector to give some time to Trisha and take the statement later. Naira is in the dilemma. Naira and Kartik get into a row. Kartik supports his brothers, with the fear of losing them. Naira insists that Lav and Kush should get arrested. He fears that Naira will get them arrested. Naira wants Trisha to get justice and leaves the decision to her. Kartik and Naira await Trisha’s decision. Will Trisha forgive Lav and Kush or get them punished? Keep reading.