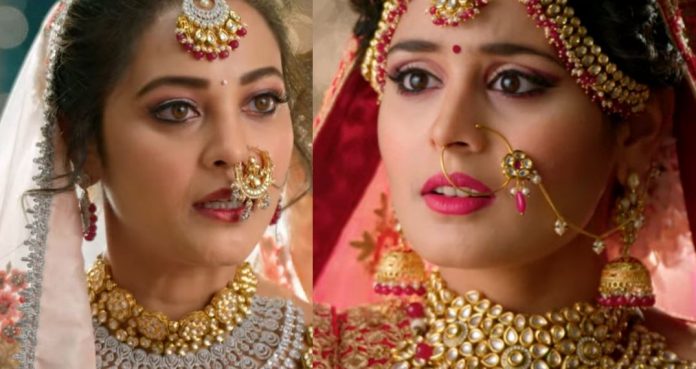 Rishtey Starplus Kuhu biggest trap Mishbir unique marriage Kuhu slaps Mishti and accuses her like always. Mishti explains Abir that she didn’t know about the divorce notice. Abir knows it and consoles her with a hug. Mishti and Kuhu have a fight on their wedding day. Kuhu tries to defend herself and also Kunal, who is trying to fix everything for them. She didn’t the matter to come out. Shaurya scolds Kuhu and Kunal for hiding such a big matter. Abir asks Kuhu not to feel sorry, she has tolerated a lot. Shaurya tells that Kuhu has her family, she didn’t need to handle anything alone. He reprimands Kunal for hurting Kuhu.

Kuhu justifies herself and gets blaming Mishti. She gets Jasmeet on her side. Varsha asks Kuhu not to blame Mishti for Kunal’s mistakes. Parul apologizes to Varsha. She didn’t know anything about the divorce. Nidhi tells that even Meenakshi won’t be knowing about the divorce. Shaurya wanted Kuhu to confide the truth. Kuhu hurts Mishti’s heart by the blames. She tells that Kunal was sorting out the problems and changing the divorce decision. She lies to them about Mishti knowing her truth. Mishti tells that Kuhu is lying. Kuhu tells that Meenakshi forced Kunal to marry her, it was just because of Mishti.

She tells that Mishti is jealous of her. Mishti doesn’t want her to lie so much. Kuhu calls her wrong. She is much hurt. Mishti tries to pacify her. Kunal tells Shaurya that he was forced to marry Kuhu, but now he loves her, he wants to be with her. The family is relieved to hear this. Mishti pacifies Kuhu, who is much affected by inferiority complex. She always thinks Mishti gets the best thing and she gets the second best. She wants to be the winner. Mishti tells that she just wanted to help. Kuhu asks her not to become great. She doesn’t understand Mishti’s intentions. Kuhu sheds tears. Mishti is equally sorrowful.

Abir convinces Maheshwaris to send Kuhu with Kunal, since she has taught Kunal to love and stay happy. Kunal and Abir try hard to convince them. Nanu and Meenakshi learn the news and get upset. They want to handle the matter. Mishti clarifies herself to Varsha, but gets blamed by Jasmeet. Jasmeet always disliked Mishti and doesn’t trust her. She asks Mishti to not marry Abir until Kuhu’s marriage gets fixed. Mishti is in dilemma. Kuhu tells Meenakshi that she wants to live with Kunal, but not share the family with Mishti. Meenakshi tells that even she disliked Mishti before, but she will be joining the family soon. She asks Kuhu to give a chance to Kunal. She supports Kuhu. Kunal feels guilty that he has hurt Kuhu a lot.

Rajshri saves Mishti from Jasmeet’s torturing conditions. Vishwamber and Rajshri support Mishti and don’t think that its her mistake. Rajshri asks Mishti to be at home, until they talk to Rajvanshs and come. They meet Rajvansh family. Vishwamber sends Abir to Mishti to cheer her up, since its their marriage day. Abir meets Mishti and enlightens her with love. Mishti is worried for Kuhu.

They decide to decorate their mandap. Kunal requests Shaurya and Varsha to let him marry Kuhu, he loves Kuhu a lot. The family blesses Kunal and Kuhu. They keep their marriage along with Mishti and Abir’s marriage. Kuhu is happy that she is marrying Kunal, but she wants to make sure that Mishti doesn’t follow her to the Rajvansh house.

She hates Mishti even more, after her divorce matter got known to the family. She swears to stop Mishti’s marriage and not let her stay happy with Abir. She doesn’t think twice that Abir saved her marriage. She asks Mishti to come back in the mandap if she ever cared for her. Mishti wants to be happy in her life. She thinks Kuhu is much upset. She doesn’t want Kuhu to taunt her further. She tells Kuhu that she can’t cheat Abir. Kuhu compels Mishti by reminding her roots and ruins Mishti’s happiness.

The family doesn’t know about their fight. They prepare for conducting two marriage functions at home. Kuhu wants to decide for her life and marriage. Mishti asks her not to get their fights in between and ruin the family’s peace. Kuhu keeps her terms that she will get married first in the same mandap. She wants Mishti to miss the mahurat. She plans to get Abir and Mishti’s marriage get cancelled because of the missed mahurat. Mishti unwilling accepts Kuhu’s demand, seeing her emotional state. She comes up with a unique idea to marry Abir in the same mahurat.