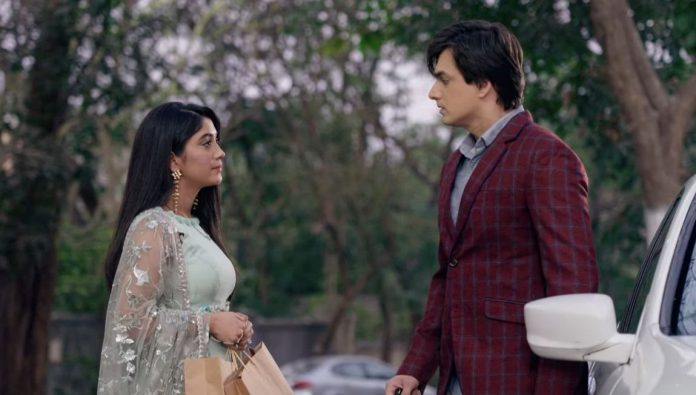 Yeh Rishta Broken Kartik Naira Lav Kush critical moment Kartik finds Naira unwell and asks her the reason. She tells him that Trisha was looking at her with much hope, while they aren’t able to get justice for Trisha. Kartik asks her to calm down first. He takes care of Naira and also understands her point. He tells her that they will get justice for Trisha. She is much upset that they had to lie to the police and cheated Trisha. Kartik doesn’t understand what she wants to do. Kartik goes to his family, while she stays with Trisha to apologize to her. Naira tells Trisha that she didn’t wish to cheat her. She asks Trisha to forgive her. The Goenkas discuss and decide a punishment for Lav and Kush.

Manish, Samarth, Akhilesh and Kartik make a mutual decision to punish Lav and Kush by sending them to a rural NGO ‘Shubham’ led by Goenkas’ company. They ask Lav and Kush to stay in the village and serve the old people at the NGO. They want Lav and Kush to do all the work themselves and not take the staff’s help. They take this step so that they realize their mistake by getting abandoned by the family. Lav and Kush request them not to be so harsh on them and not oust them from the family. Dadi reprimands the boys for their cheap act. The family doesn’t want to see their faces. They don’t hand over the boys to the family after fearing another suicide attempt by Kush.

They don’t want Kush to hurt himself. Lav is glad that their suicide drama worked and police didn’t arrest them. He thinks to play such drama again to get a place in the house. Naira meets the family and finds them deciding the punishment. She doesn’t think that ousting Lav and Kush from the family for 2 years will change them any way. She wants to get them arrested. Dadi asks Naira not to involve the police. Naira asks Kartik if he is supportive of this decision. Kartik tells that he doesn’t want to lose his brothers, it will be better that Lav and Kush serve the people at the NGO. Naira asks him how does that service be taken as a punishment.

Kartik tells that it will be too tough for them. Kartik announces that Lav and Kush won’t be in contact with their parents or family. Dadi wants Trisha to lie to the family. Naira tells Kartik that they have to bring Lav and Kush to the right path. He tells that he can’t see his brothers behind bars. Naira gets upset. She feels compelled by in-laws to hide the truth. Lav and Kush make plans to bribe the staff and get the work done. They want to act well and gain sympathy from family, so that they don’t need to go to the village. They have no regrets. When they see Kartik, they act to regret their doings. Kartik is glad seeing their change.

Naira overhears Lav and Kush’s conversation. She learns that they aren’t regretting and they are still spoilt. Naira breaks down in guilt when Negi calls her and asks her to get justice for Trisha. She asks Kartik to get Lav and Kush arrested, the NGO work won’t change them, their crime isn’t a small thing. Kartik doesn’t want her to become the boys’ enemy. He tells that he loves his brothers and won’t lose them. He gets into an argument with Naira. Dadi and Manish announce a Shivratri puja to keep Naira engaged. They are afraid that she may call the police home. Kartik is also afraid of the same. Gayu is much worried for the house tensions.

She tells Samarth that Naira isn’t wrong completely. Samarth wants to support Lav and Kush. Kartik requests Naira to not hurt his family. Gayu tells him that Naira isn’t at home. He thinks she has gone to the police station. He gets tensed when a police jeep passes by. Naira meets him and tells that she had gone for shopping, she isn’t cheating the family. She is torn between her family and duties towards Trisha. She fights her inner dilemmas. Naira takes the huge step to get Lav and Kush arrested, when she finds them disrespecting Trisha once again.