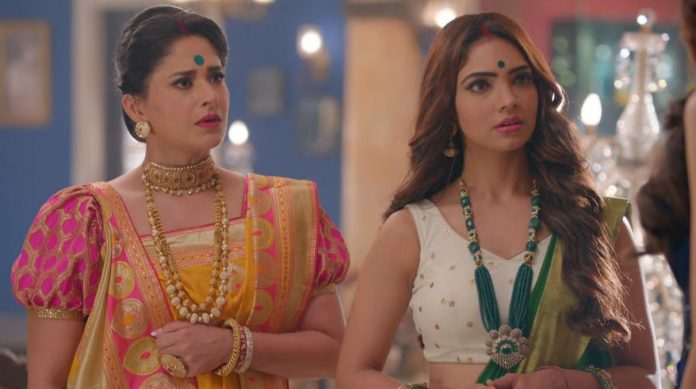 Kasautii Sonalika big revelation Mohini unexpected move Ronit manages to escape from Shekhar’s clutches. Shekhar informs the police. The police reaches the place. Shekhar updates about Ronit’s escape. They realize that someone is still hidden there. They find the mechanic drunk. Shekhar tells the inspector that he had earlier caught the same mechanic for failing the car brakes. The mechanic knows that Ronit and Sonalika won’t leave him, and its better that he stays protected from them. He chooses to go to the jail. He surrenders to police and tells that he is ready to reveal his boss’ name, who hired him to kill Prerna. Shekhar wants to know about the culprit, but fails.

Inspector assures that they will soon know the culprit and arrest. Mechanic gets arrested. Ronit goes away and buys a shirt from someone. He calls Komolika to give the bad news that he couldn’t kill the mechanic, who got arrested because of Shekhar’s entry at his place. He apologizes. She tells him that she is left with no option to take his help, but he always disappoints. She is afraid that the mechanic will name them in front of the police. She doesn’t want Anurag to hate her. On the other hand, Viraj is scared that Komolika can cross any limits and may harm his wife Nitara if he fails to do her work.

He has been hired by Komolika for the big purpose to separate Anurag and Prerna. He doesn’t want any trouble for his family. He hires Veena’s maid and bribes her. He asks her to administer drugs to Veena, which will make her fall ill. He wants to emotionally blackmail Sharmas so that he can marry Prerna in two days and fulfill Komolika’s given task. Viraj injures himself in rage due to Komolika’s threatening. Later, Anurag returns home and meets Anupam. Anupam asks him about the motive behind following Viraj. Anurag tells that he is suspicious about Viraj, who is hiding something. He doesn’t want Viraj to marry Prerna.

He tells about Viraj’s strange lies. He is protective about Prerna. He doesn’t want her to suffer. Anupam asks him to then stop the marriage, so that Prerna and he can be happy. Anurag asks will Prerna get happy if the marriage breaks. Anupam tells that she will get saved from a wrong marriage. He asks Anurag to find the truth. Anurag is sure that he will find out Viraj’s real motives. Anurag calls Shivani to talk to Prerna. He overhears Shekhar and Prerna’s conversation on the call. Shekhar tells Prerna that the police arrested the mechanic, who is ready to reveal about his boss. He wants to know the truth. Anurag calls Moloy to take his help.

He meets the inspector and gets a favor. He thinks he can meet the mechanic and get his answers. Prerna tells Shekhar that she knows the wrong doer, Sonalika. She tells that Anurag’s wife Sonalika is insecure of her and doing such crimes to harm her. Shekhar can’t believe this. He wants Sonalika to get punished. Prerna doesn’t tell that Sonalika is Komolika. She tells that she has already made a plan to expose Sonalika’s truth and get her ousted from Basu house. She tells him that Sonalika will be out of their lives. Anurag meets the mechanic after seeing the permission.

Mechanic thinks Komolika has sent him to beat him so that he hides her truth. Anurag doesn’t think anything and bashes up the mechanic in the lock up. He compels the mechanic to tell the truth. The mechanic tells him that Prerna’s enemy wanted to kill her. Anurag gets close to know Sonalika’s name, but inspector intervenes to stop Anurag’s madness. Anurag leaves the mechanic free. Inspector warns him against crossing limits. He sends Anurag away. Anurag gets suspicious about Prerna’s enemy, who could be Viraj. He wants some direction to find clues.

Moreover, Viraj gets ready to meet Veena and request to prepone the marriage. He meets Sharmas. He makes a fake story of his work project. He tells that he wants to marry Prerna soon and take her along to Dubai, where he will heading a project. Veena gets convinced by him and agrees to keep the marriage function soon. Viraj gets glad with her answer. Veena thinks Prerna should get away from Anurag and accept reality. Komolika is tensed about her truth coming out. Prerna meets Basus. She shouts on Prerna and insults her.

Komolika and Prerna get into an argument, while Mohini favors Prerna for the first time. Komolika gets stunned when Mohini goes against her. Mohini makes an unexpected move just because Prerna saved Anurag’s life. Komolika calls it a fake story and scolds Prerna for weakening her place in her in-laws. Komolika threatens to leave the house if Basus support Prerna. Anurag spies in Viraj’s house to find his real intentions. Viraj gets tempered up knowing Anurag’s expected daring move.