Yeh Rishta Lav threatens Trisha End of Kaira once again Goenkas decide to talk to Trisha and make her forgive Lav and Kush. Dadi tells that they will compensate Trisha and take care of her as a family member, so that Lav and Kush get saved from the police. Dadi acts selfish as if she doesn’t care for Trisha’s trauma and is just favoring her for the sake of her grandsons. Naira feels low to see the family getting insensitive. She didn’t Kartik to withdraw support. Dadi asks the family members to come for the Shivratri puja. She explains the significance of the puja, how important it is to support the truth.

Naira thinks that Goenkas don’t practice what they preach. Kartik feels sorry that he isn’t able to support the truth. He wanted to support Naira and Trisha, but not at the cost of his brothers’ lives. He is mentally broken thinking of Kush’s suicide attempt. He is afraid to lose Lav and Kush if Naira calls the police home. Trisha gets conscious and looks for Naira. She comes downstairs to talk to Naira and ask about the police case. Naira stays busy with Goenkas’ puja. Lav and Kush happen to see Trisha. Trisha wanted them to be behind bars. Lav and Kush block her and take her to the storeroom to threaten her.

Dadi tells the family that they shall go to the temple and complete the puja rituals. Manish tells Akhilesh that Naira won’t go against Kartik, she will not call the police. He assures that Lav and Kush are safe. Surekha panics further until she gets her sons’ security confirmed. Kartik is in two minds because of Naira. He doesn’t want Naira to take any shocking step that breaks the family. Lav and Kush angrily insult Trisha for being an ashram girl. They want her out of the house, since she means nothing to them. She threatens them about police. Lav tells her that Kartik and family are supporting her, and even Naira will be on their side soon. He tells that Naira won’t support her in the justice fight.

He laughs on Trisha’s state. He asks Trisha to just get out of their lives. Naira overhears their conversation. She finds Trisha shattered. Trisha leaves the house. She is broken due to Lav’s bitter words. Naira looks for Trisha to save her life. She stops Trisha from hurting herself. Trisha gets emotional and reminds their strong connection. She feels Naira has abandoned her for the sake of Lav and Kush. She tells that Naira has lost her identity of bold and daring Tina, while being Kartik’s wife and Goenka’s Bahu. She feels let down. She sheds tears and reminds her what Tina would have done in this matter.

She tells her that Lav and Kush insulted and scared her once again. She feels the family’s support is encouraging Lav and Kush. She doesn’t want to have any hope from Naira. She feels being poor is a curse. Naira breaks down on hearing her speech. She promises to support Trisha. They pray to Shiv. Naira performs Tandav, until the family arrives. The family gets moved when the police comes to arrest Lav and Kush. Kartik can’t believe that Naira called the police to get his brothers arrested. He asks Naira not to do this and stop the arrest.

Consequently, Naira stops the police, which gives big hope to Kartik. Naira doesn’t stop the arrest and sends Lav and Kush away. Kartik challenges her that he will free his brothers from the law and get them home. Kartik and Naira get against each other. Dadi loses her cool on Naira’s stubborn move. Naira wants justice for Trisha at any cost. Goenkas felt the NGO service would be enough punishment for Lav and Kush. They don’t know that Lav and Kush are still criminal-minded and don’t have any regret. Lav and Kush faked the signs of repentance to influence Kartik. Will Lav and Kush become a reason for Kaira’s bond ending again? Keep reading. 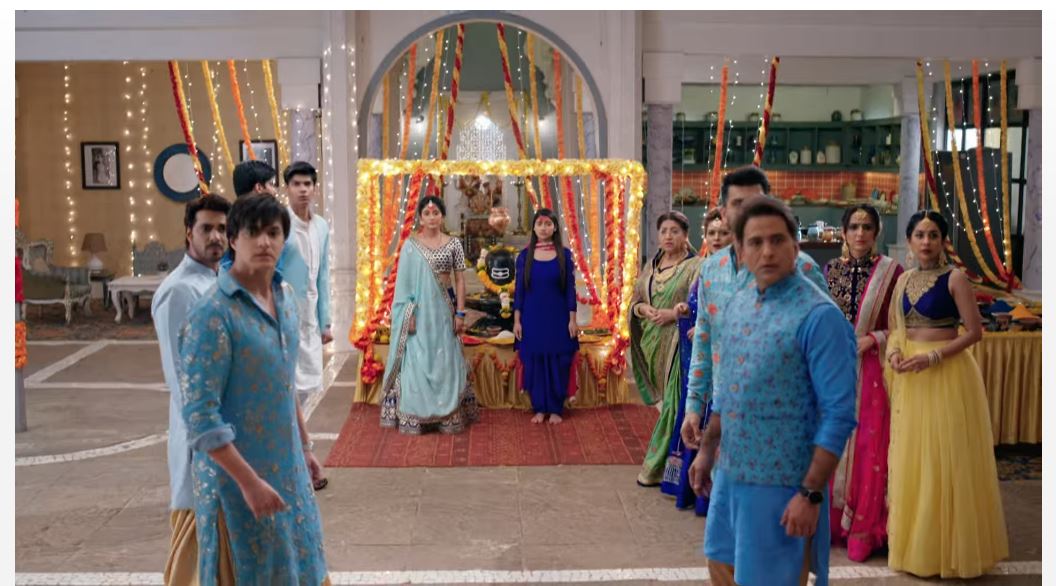