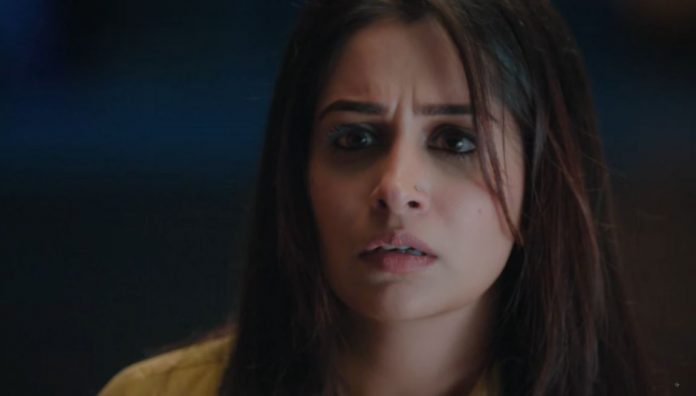 Kahaan Hum NEW Starplus Sonakshi stunned by this truth Rohit handles an intoxicated Sonakshi. She goes on venting her frustration on her failed marriage due to her insensitive husband Dr. Rohit Sippy. She tells that he always professed love, but couldn’t prove it when needed, since he wasn’t with her when his family proved her wrong. She wanted him to defend her and become her strength. She regrets that Rohit’s love wasn’t true. Rohit tells her that he loves her a lot. He gets emotional on hearing her feelings. Sonakshi and Rohit’s conversation gets recorded in her phone by mistake. The recording will later play a big role in uniting Ronakshi. He tells her that maybe her husband was helpless by family pressure, his mom or his dad’s problems.

Sonakshi tells that she has loved his family more than he did, and still her love wasn’t sufficient to make a mark. She regrets that Rohit rudely ousted her. He tells that her husband would be loving his mum more and took this step. She tells that he knew she also loved his family, but didn’t trust her. She tells about evil Nishi. Rohit knows Nishi is evil and Sonakshi is so right about her. He still maintains his helplessness, which wasn’t avoidable. She regrets that she lost her show because of Rohit. She feels ill-fated that she lost everything in her life. He pities her and feels guilty.

She isn’t able to identify him. She falls asleep. Rohit calls Sumit there and asks him to take her home. He wants to catch Ranjan and get him arrested for his cheap move. Sumit wants to know why is Rohit not talking to Sonakshi directly and setting things right. Sumit tells that people like Ranjan are many, Sonakshi knows it well, she needed work and was helpless to meet Ranjan. Rohit doesn’t want her to fall into any trouble. He tells Sumit that he will get Ranjan arrested and not let any wrong person reach Sonakshi. Sumit tells about Sonakshi’s struggles to find work. He brings Sonakshi home.

He is much upset seeing Sonakshi’s life turned upside down. He wishes that things get fine between Rohit and Sonakshi. Suman is grateful to him for saving Sonakshi. She feels Ranjan should be strictly punished. He doesn’t say that Rohit got Ranjan arrested. He tells that law will punish Ranjan. He tells her that he is much worried for Sonakshi. He asks Suman to be with Sonakshi and try to end her fears. Suman is touched seeing his concern and support for Sonakshi. She wants to ask him if he likes Sonakshi. He admits that he likes Sonakshi but just as a friend.

She advises him to propose Sonakshi for marriage. She wants Sumit to become a pillar of strength for Sonakshi, who really needs someone in the broken state. Sumit gets speechless. He knows Rohit and Sonakshi have much love in their hearts, but the fate is keeping them apart. He doesn’t want to come between them. He refuses to Suman. Suman still insists him and lets him think well. He owes his positive change to Sonakshi. He sings many praises of Sonakshi. Suman tells him that his friendship can become Sonakshi’s strength, since friendship is something that remains constant, unlike love which changes with time.

She regrets that Rohit claimed to love Sonakshi and made big vows, which he couldn’t keep. She is angry that Rohit has broken Sonakshi’s heart. Sumit can’t tell her the truth that Rohit called him for helping Sonakshi. She asks him to think well and decide about the proposal. She wishes Sumit marries Sonakshi and secures her future. On the other hand, Pari leaves from the cafe when the doctor doesn’t come. She doesn’t know that Rohit called her for the meet. Rahul doesn’t like to follow her. Rohan asks him to just follow Pari and he will handle her. Pari feels someone is following her. She goes to the building by walk.

Rohit stops her for an important talk. She scolds him for abandoning Sonakshi. He tells that he knows she is pregnant and carrying Rohan’s baby. She tells him that he can’t stop her from ruining Rohan’s life. He tells her that she can’t ruin her own life by using her baby for her purpose. She tells that she didn’t wish to cheat her family, but she will reveal the truth to everyone soon. She aims to achieve everything by using her baby. She wants to get an entry in Sippy family and ruin them to get justice for herself and Sonakshi. Rohit feels she is inviting problems for herself. He asks her not to do wrong.

Pari doesn’t listen to him. Suman is worried that Pari isn’t home since long. She takes care of Sonakshi. She calls Pari and panics when Pari doesn’t answer her numerous calls. Pari gets upset and cries. Rohan captures Pari to draw her unconscious. He forcibly feeds her the pills for abortion. Rohit reaches there on time and stops Rohan from committing a heinous crime of killing an unborn baby in womb. Rohit tells him that Pari isn’t carrying his baby. Rohan slaps Rohit and asks him to think of his baby, he can’t harm a baby in womb. Rohan and his friend Rahul flee when Rohit bashes up Rohan.

Later, Sonakshi learns that Pari isn’t home since much time. She finds Suman worried and goes with her to find Pari. They find Pari with Rohit and question him. Rohit asks Sonakshi to be concerned for Pari, who is pregnant. Sonakshi and Suman didn’t know about Pari’s pregnancy. They are in a shock knowing Pari had hidden it since four months. Rohit makes Pari expel the pill. He takes care of Pari. Sukhmani tells Akash and Deepa that they will keep a reception party once Deepa’s mum recovers from illness and returns from the US.

Veena shows Rohit’s birth chart to the pandit to seek his advice over his future. Nishi has planted the pandit to scare Veena. The pandit lies to Veena about the upcoming problems in Rohit’s life. He advises her to save Rohit by getting him remarried soon before the darkness of loneliness swallows him. What will be Rohit’s take knowing about the alliances for him and Sonakshi? Keep reading.

I haven’t missed a single episode. It’s a beautiful storyline, so different from any other daily soap. Their chemistry is eye catching and unique, there is so much spark !!! But extremely upset hearing about the show going off air. Hoping and praying the channel reconsiders it’s decision! Die hard fan of Ronakshi and they deserved to be watched and blessed! Fingers crossed.