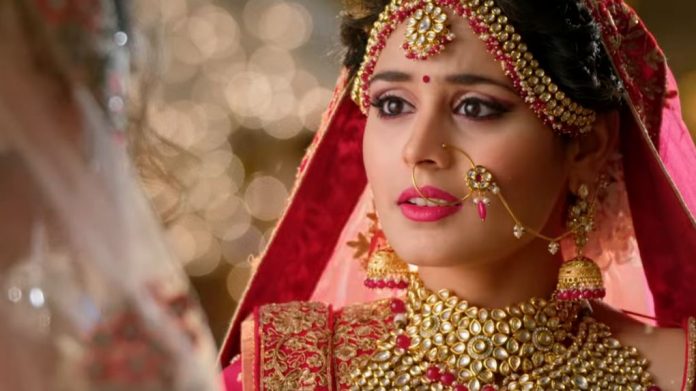 Mishti wedding decision Rishtey Pyaar Ke Starplus Mishti is much upset because of Kuhu’s behavior. She doesn’t want to think of Kuhu’s taunts and spoil her big day. She thinks of staying happy so that she can keep Abir happy. Kuhu is miffed seeing Mishti turning insensitive. She blames Mishti for every thing, even if Mishti tries to avoid her. Mishti thinks of Abir and her marriage. She sounds happy. Kuhu has a problem with her happiness. She doesn’t want to see Mishti happy and doesn’t care for her happiness. She hurts Mishti unintentionally. Mishti tells her that Abir and her marriage means a lot to her, she won’t let anyone spoil their smile. Parul thanks Meenakshi for uniting Kunal and Kuhu. She wants Meenakshi to attend the marriage function.

Meenakshi asks her to make her sons wear the Pagdi/turban on their big day. Parul asks her to do the turban tying ritual for Kunal. Meenakshi sends her to Abir. Abir and Kunal get decked up and look handsome. Abir compliments himself. Kunal tells that he wants to give all his attention and importance to Kuhu from now. He tells Abir that he didn’t propose Kuhu till now. Abir asks if the love confession moment broke in between. He wants to help Kunal in his romantic love confession plans. Kunal thanks him. He goes to Meenakshi to get the Pagdi tied up. He wants Kuhu’s happiness. Abir thinks of meeting Mishti.

He feels sad that Meenakshi isn’t part of the marriage function. Parul and Nanu make him wear the Pagdi and request him to allow Meenakshi in the marriage. They think Meenakshi has got punished enough by now. They tell that Kunal and Kuhu have forgiven Meenakshi. Abir tells that he didn’t forgive Meenakshi yet, since she has done much to break his marriage. Kuhu tells Mishti that she is sharing everything with her and isn’t happy. The sisters have an argument. Mishti corrects Kuhu. Jasmeet meets Kuhu and poisons her mind against Mishti. Kuhu gets against Mishti again. Jasmeet asks her not to let Mishti steal the show.

She tells that Kunal and Kuhu’s marriage may not happen. This makes Kuhu afraid. Abir and Mishti have a talk over involving Meenakshi in the marriage. Mishti wants Meenakshi in the function. She attempts poetry and makes him laugh. Vishwamber asks Mishti to not have any worries. Abir learns that Meenakshi is much willing to attend the marriage. Meenakshi blesses Kunal. She tells that like she accepted Kuhu, she will accept Mishti as well. She knows everything will fall into place. Abir apologizes to Kunal for keeping Meenakshi away from their marriage functions. Mishti and Kuhu get decked up as the brides. The family blesses them and showers love on them.

They get emotional thinking of bidaai. Kuhu gets insecure like always. Abir and Kunal get the baraat to Maheshwaris. Meenakshi isn’t part of the function and is upset at home. Abir gets a call and goes back home. Maheshwaris welcome the baraat and find Abir missing. Kuhu meets Mishti to keep her next demand that she will get married in the mahurat first. Mishti thinks Kuhu will create problems for her. Kuhu compares their lives and cries on her sorrow. She finds Mishti’s life happier and better. Mishti asks her to be grateful to get another chance.

She doesn’t think her life is free of problems, because of Meenakshi. She decides to marry Abir in the same mahurat, if not in the same mandap. Abir brings Meenakshi in the function. Mishti decides to send Kuhu to the mandap for the marriage first. She hopes that Kuhu’s thinking of insecurity ends.

Best comment by Antonette Dcosta:
Kuhu’s immature behaviour is irritating! Tell that girl to grow up! Relationships are not about competition but based on understanding and adjustments. Hindi TV series always portray wrong things to the audience, very reason maybe most families breakup watching too much of such negativity on TV.