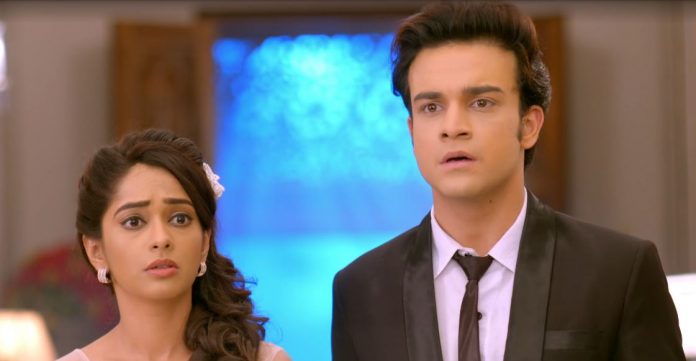 Kumkum Electric shock for Prachi Rhea plays evil Prachi misses to see Rhea hiding in the bathroom. Ranbir tells her that he has heard someone’s voice. They have a moment of unspoken romance, while Rhea gets jealous seeing them. Shahana gets angry seeing Aryan with some girl. She gets revengeful to teach him a lesson. She makes him fall down and clicks his picture. She asks him to stop the madness. Vikram wants Abhi to sing in the engagement. He gets to hear good things about Ranbir. He calls Ranbir to ask him to come and help in the event. Ranbir makes excuses. Vikram asks him to tell him, with whom is he right now. Ranbir lies that he left from the hotel. He tells that he had important work with Prachi.

Vikram gets tricked. Sarita confronts Rhea for meeting Maya. Rhea asks Sarita to think of anything. She tells that she has enough jewellery and she didn’t come to steal anything. She asks Sarita to keep an eye on Prachi, who may steal things, she has nothing with her. She vents anger on Prachi. Sarita knows that Rhea is jealous of Prachi. Vikram tells Ranbir that he is proud of him. Pragya finds Ranbir lying to Vikram. She asks him what’s happening and why did he lie. Ranbir and Prachi try to make a story. Shahana tells Pragya that their plan is to practice dance with the group for the college fest. She comes up with a convincing lie.

Pragya asks Ranbir to help his dad, since he really needs support. She tells that Vikram’s image can get spoiled, if the function goes wrong. Rhea is glad that Pragya made Ranbir and Prachi busy in work. She wants some time to deal with Maya. She gets a plan to distract Ranbir. She also wants to harm Prachi. Sarita keeps an eye on Rhea. She thinks Rhea is up to something. She finds Rhea bribing the waiter and taking some water glasses. Abhi gets enough by having much food. He tells the client that he can’t sing now. The client Chobey/Maya’s dad tells him that it will be a big favor if he sings. He requests Abhi for the sake of Maya’s happiness.

Abhi understands his emotions and agrees to sing a song. Sarita misses to find Rhea. Rhea gets evil and goes to electrocute Prachi. She wishes that Prachi loses her memory. Ranbir tells Pragya that Abhi is very much similar to her. Aryan looks for Shahana, who hides from him. Ranbir tells him that he has seen Shahana. Shahana asks Pragya to save her. Rhea sees Prachi going towards the temple area. She wishes Prachi doesn’t die. She feels guilty for her evil plan. She thinks to go and check on Prachi. She is much selfish and lets Prachi go in the danger zone. She wants Ranbir’s love and can do anything for him. Will Prachi get saved in time? Keep reading.