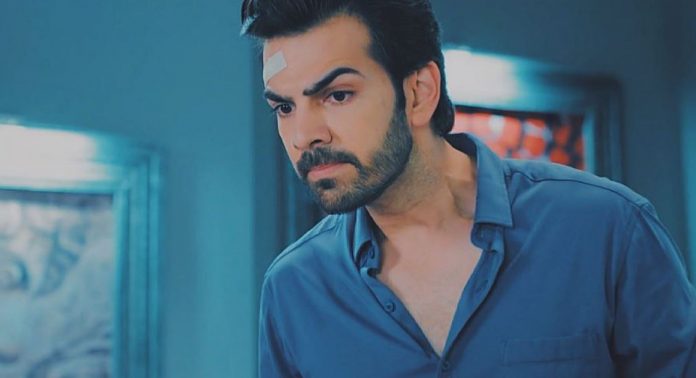 Sonakshi shocking Boyfriend Rohit rages in Kahaan Hum Sonakshi is much heartbroken because of Rohit. Sonakshi goes to the pub where she comes across Rohit. She bears the same humiliation again. She doesn’t know that Rohit is deliberately doing this. She was running away from Rohit. She asks why does he always come in front of her and refresh her wounds. Rohit tells her that he can tell the same to her, she is always around, when he wants to be away. Rohit tells that its his friend’s pub and he had come on invitation. Sonakshi tells him that she isn’t following him, she has come with Sumit. Rohit drinks to forget his sorrow. He thinks fate is playing with him, since he has coincidentally met Sonakshi and Sumit.

He finds them dancing happily. He doesn’t like it and gets jealous. He also wants Sonakshi to move on, since she has no future with him, all thanks to Nishi and Veena. He is threatened by Nishi about Naren’s life. He can’t tell his helpless story to Sonakshi. He thinks it will be best if Sonakshi chooses Sumit as her life partner, since she likes Sumit and even Sumit likes her. He finds them respecting and caring towards each other. Though its much painful for him, he lets them dance and advises them to bring that spark and chemistry between them, as they have always projected as Parvati and Kunal in their show. He feels Sumit is the right guy for Sonakshi.

He had convinced Sumit to take Sonakshi on a date, but he didn’t knew that they will come to the same place. He feels a heartache to see them together. Sumit romances Sonakshi to make Rohit more jealous, so that Rohit accepts his love and clears the misunderstanding. Sumit proposes Sonakshi for marriage. She is much surprised by the unexpected moment. Rohit gets angry seeing Sumit’s romantic gestures. He wants to break the alcohol glass, but controls his anger. He acts normal in front of Sonakshi, that she doesn’t matter to him now. He asks her not to have any hopes that he will accept her back in his life and love her. He asks Sonakshi to keep her esteem and stay away. Sonakshi gets upset and decides to accept Sumit’s marriage proposal. When will Rohit’s Devdas avatar end? Keep reading.

Reviewed Rating for this particular twists: 3/5
This rating is solely based on the opinion of the writer. You may post your take on the show in the comment section below.

Please request @StarPlus to extend the show. This broke the stereotypes of tv shows. All of the fans are urging and pleading the channel to grant our request. We can’t reach to the higher authority. If you could do something for us, then it would be a great pleasure. Thank you.