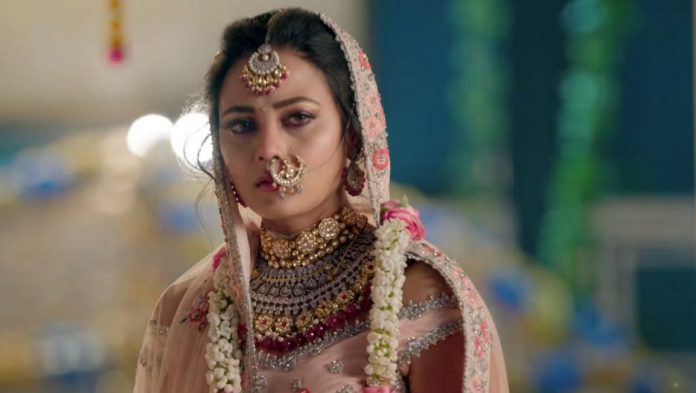 Rishtey Spoiler Starplus Coming Kuhu vampish ways Meenakshi welcomes her Bahus in the family. Jasmeet calls her to know about Mishti and Kuhu. Meenakshi praises Mishti for helping Kuhu even on the day of her marriage. She tells that she was wrong to judge Mishti wrong before. Jasmeet can’t believe that Meenakshi welcomed Mishti without any drama. Meenakshi is happy since she could become part of Abir’s marriage because of Mishti. She sings praises of Mishti. Vishwamber consoles Rajshri, who feels Mishti isn’t happy in Rajvansh family. She tells him that she can sense Mishti’s tensions, being her mother. She asks him to take her to Rajvansh house or call Mishti to talk.

She regrets to send Mishti to Rajvansh house. He understands her anxiety. She tells that Kuhu will trouble Mishti, she isn’t worried because of Meenakshi. He wants to know the truth about Kuhu. She fears that Kuhu and Mishti will clash like always and Meenakshi can use their fights. He is sure that they will be happy because of their best life partners. He likes Kunal’s transformation since he married Kuhu. He tells that Abir will always support Kunal, they have much love between them, they are family’s strength. He asks her to relax. Kuhu does best arrangements for post marriage rituals.

Meenakshi tells Kuhu that they have seen all such decorations before, there is nothing new like her Kuhuness, which won’t surprise Mishti now. She wants to have something unseen till now. She asks Kuhu to change everything. Kuhu gets upset and pretends to smile. She discards the already done arrangements.

Meenakshi is glad that both her Bahus are perfect. She wants to arrange a surprise for Mishti, something unique. Kuhu is ready to help. Meenakshi’s favoring Mishti makes Kuhu upset on her marriage day. Kuhu will be posing a big trouble for Mishti, because of her never ending insecurities. Abir and Mishti will have a new task to manage their lives in the presence of Kuhu’s conspiracies. Kuhu wants to become first in everything that’s planned for Mishti and her. How will Mishti secure her happiness from insecure and immature Kuhu? Keep reading.