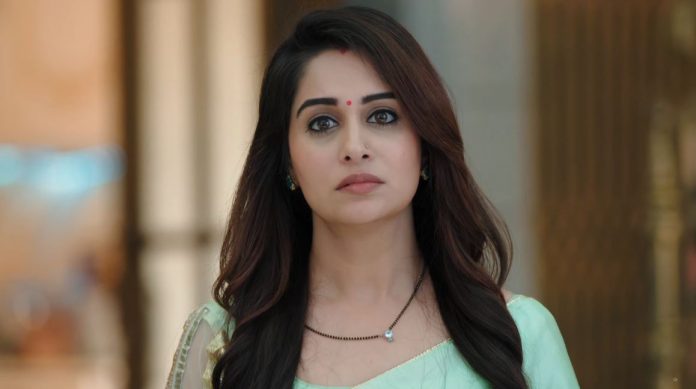 Kahaan Hum Sonakshi declaration Top 3 Spoilers Today Sonakshi makes a shocking declaration to Rohit. She tells him that she is in a relationship with her good friend and ex-colleague Sumit. Sonakshi and Rohit come face to face once again. She tells that she was wrong to love Rohit before, since he couldn’t keep vows and broke her heart. He is much hurt and jealous. Sonakshi thinks its a chance to give back the humiliation. She tells that she isn’t willing to return in Rohit’s life even if he falls in her feet. She tells that she is going to marry Sumit, she has given her heart to Sumit now, knowing he will always keep her happy. Rohit convinces Sumit to accept Sonakshi’s proposal.

Sumit knows they love each other. He finds Sonakshi getting uncomfortable during the dance. He asks if she is okay to dance. Sonakshi tells that she is okay. Sumit cares for her. He wants her comfort and happiness. Rohit also realizes that Sonakshi isn’t comfortable to be close to Sumit. He regrets that his love is still stopping Sonakshi from moving on.

Mere Dad Ki Dulhan:
Amber is much upset that Guneet’s Roka. He didn’t know that he will be much affected. Guneet offers him sweets. He gets to see her as Baawra Mann. He thinks if he should analyze her qualities by forgetting their fights. He is disturbed.

He is upset with himself. He didn’t know he will trouble his friend so much. He overhears Guneet and her mum’s conversation. He is emotional. Nia knows Amber is doing wrong to trouble Guneet. She unwilling supports him. Amber starts liking Guneet’s smile and positive talks. He falls in a dilemma over his feelings.

Shakti:
Heer is much upset that she couldn’t fulfill her love story with Virat. Heer returns home and is much sinking in sorrow. She packs the gifts given by Virat. She is angry and wants to return everything to Virat. She hasn’t given her exams, because she was busy with Virat. Harak and Preeto don’t know that Heer didn’t write exams. They play dhol and dance, that someone from their family is getting graduated for the first time and bringing pride. Rohan, Soham and Heer get to see the grandparents dancing. They don’t know what’s happening. The brothers don’t know about Heer proposing Virat. Heer is hurt and wants to end her friendship with Virat.

Vidya:
Vivek and Vidya love each other a lot. Vivek’s mum is in coma. Vidya had promised her that she will not marry Vivek. She is helpless when Vivek asks her if she loves him and wants to marry. Vidya can’t break his heart. Vivek and Vidya perform the Shivratri puja in the village temple. Guru ji blesses their pairing. Vivek proposes Vidya for marriage. Vidya wants to marry him, but recalls his mum’s conditions. She isn’t happy from heart. She is facing big problems because of her promise to Vivek’s mum. Vivek tells her that once they get married, she can give her exams with ease and none would know that she is an illiterate.

He tells her that he has found this solution to all their problems. Dharma informs Nanku that Vidya is illiterate. Nanku gets the last trump card against Vidya. He wants to use the truth. He tells Dharma that now he will reveal the truth to the authorities and get Vivek suspended for partially favoring his love Vidya and cheating the system. Nanku is sure that this truth will ruin Vivek and Vidya’s lives.