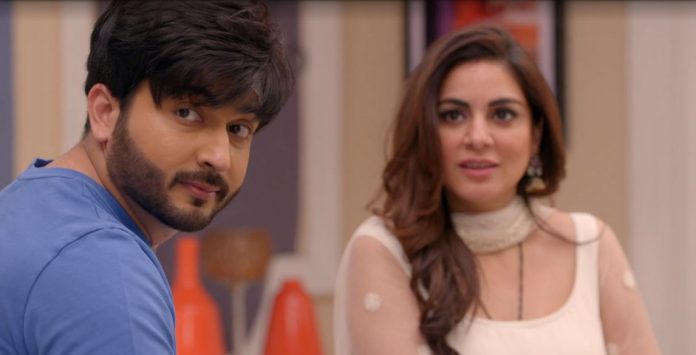 Kundali Bhagyya Alarming news Karan Preeta new troubles Rishabh handles Kareena so maturely. He tells that when Mahesh suffered a heart attack, he was immature and didn’t know what to do, he followed her and did everything for the family. He tells that he has walked on the path shown by her and made a big business empire just because of her. He tells that he doesn’t want to take Mahesh’s place and just wants to fulfill Mahesh’s responsibilities. He reminds Kareena’s words. He tells that nothing is stronger than a united family. He wants her to be with him in their decisions, so that no one shatters them. He loves them a lot and wants to support Karan to avoid clashes.

He tells that he is following her teachings. Rakhi tells Rishabh that he is right. Karan wants the love from Rakhi too. Rakhi feels proud of her sons. Karan asks the reason for Rishabh’s emotional talk. Rishabh tells that he has really learnt a lot from the family and now its Karan’s turn. Dadi tells Ramona that the family is bounded by love and she is enjoying her life just because of them. Rakhi asks Karan and Sameer to go and change their clothes. Rishabh keeps an eye on Babbi. Kareena tells Rishabh that he should support just the family, not Preeta, who is an escapee. She doesn’t want the murderer home. She is scared.

Meanwhile, Sherlyn and Mahira are also scared. Mahira wants Karan as Luthras promised her. She tells that Kareena had come to her with the alliance. She wants to marry Karan soon. She tells Sherlyn that she is soon going to become a Luthra, if this doesn’t happen, then she will be ruined. She wants to fight for her rights. Sherlyn asks her to shut up and think of a solution. Sherlyn tells her that she did wrong to push Preeta. Mahira reminds that she did this on her saying. They both end up fighting. Mahira wants to explain everyone that Karan is doing wrong. When she tries to explain Karan to call the police, he doesn’t listen to her.

Kareena and Ramona talk in favor of Mahira. Rakhi doesn’t want Ramona in talk in between, since its about Karan and Preeta. Kritika tells her that she has a right to keep her opinion. Kareena scolds her. Dadi tells Kareena that Kritika is right. Mahira tells them that they should think of their reputation as well. She tells that Preeta and Babbi shouldn’t be home, else they will be charged for kidnapping. Rishabh asks if she is saying so due to her dislike for Preeta. Mahira asks him to understand her good intentions. He asks her to let them deal with the problem and let Karan do the right thing. Sameer gets Shrishti’s call and worries that she is in trouble.

Rishabh thinks who has framed Preeta. Preeta does the aid to her wound. Karan tricks her by asking her to get out of his house. He applies the medicine to her hand by trying the shock therapy. They have a pillow fight, which makes them slip into a romantic moment. Mahira watches Karan taking care of Preeta. Preeta tells Karan that she will do the dressing and relieve his wounds. Sameer calls Shrishti and informs that Preeta is fine. She tells him that Preeta always supports truth and may land in trouble. She tells that lady constable told that Preeta is declared as an escapee by the police. He promises to protect Preeta. He rushes to inform Karan.

Sherlyn asks Mahira about Karan. Mahira tells that Karan had promised to marry her, but she didn’t help him, Karan won’t be marrying her now. She feels everything is over. She tells that she has lost Karan to Preeta, she has seen them together. She fears that she will be exposed. Sherlyn asks her to stop the drama and help her. She doesn’t want Preeta and Karan together. Mahira tells her that they have to make Babbi out some way. Sameer goes to tell Karan, and hides the matter from Preeta. Shrishti lies to Biji. Biji asks her to say the truth. Shrishti tells her the entire truth. Biji worries for Preeta. She doesn’t think if they can trust Karan or not.

She wants to follow the heart and trust Karan. Preeta calls home to know about Sarla. Biji asks them not to hide anything from her again. Preeta gets emotional. Sameer tells Karan that police has declared Preeta as a runaway prisoner. He tells that police is searching for her. Karan doesn’t want anyone to know that Preeta is at his house. Sameer assures him. Police reaches Sarla’s house to find Preeta. Sarla tells that Preeta isn’t at home. He tells that Preeta has run away. He questions Shrishti. The police doesn’t find Preeta. Shrishti doesn’t tell anything to the police. Sarla argues with the inspector, who threatens them with dire consequences. Sherlyn wishes Prithvi was with her at the time when she needed him the most.

She feels that she is getting caught in her own plan. She doesn’t want to lose her place in Luthra house. Ramona and Mahira make a plan with Sherlyn that they will inform the police about Preeta. Mahira is much tensed that Karan will know her truth. Ramona tells her that Luthras are protecting Preeta, they will not call the police. Mahira doesn’t waste time and informs the police about Preeta seen entering Luthra house.

She doesn’t want anyone to know that she has called the police. Rishabh and Karan wait for Babbi to get conscious. Rishabh wants something to help Preeta in the case. Karan tells that he will find out the truth from Babbi itself. Rakhi tells that they will not spare Babbi. Karan is happy with his family. Rakhi and Kritika sympathize with Preeta, which upsets Kareena.