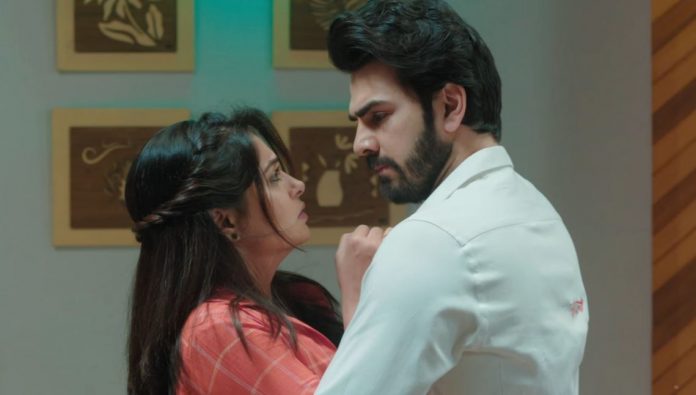 Trending Starplus Rohit Sonakshi Kahaan Hum Upcoming Suman decides to get Pari’s baby left at some orphanage after the birth. She tells that they will take care of Pari until the delivery and then abandon the child. Sonakshi disagrees. She tells that they will take care of the child well and raise with love, the child has a family, he isn’t an orphan. Suman tells that baby will be called an illegitimate, Pari would be a single mother and face tough time in society. Sonakshi tells that if Suman could raise three children alone, and they all can raise a single child with ease.

She tells that Pari isn’t at fault alone, Rohan is also responsible for the affair, they have to stop feeling ashamed about the child, who isn’t at any fault in the matter, only then the society will accept the child seeing their confident behavior. She wants to be strong. Suman gets convinced and finds Sonakshi ready to take up a new responsibility. She blesses Sonakshi. She tells that baby will may good times and luck for them. She asks Suman to be positive. She gets a call from a producer and accepts the work. She tells Suman that baby is really lucky for them. She goes to meet the producer and discuss the contract details.

On the other hand, Rohit is much busy in a meeting with the doctors’ team. He tells them about the virus spreading quickly and killing people. He tells about the air-borne virus, which is tough task to control. He asks the team to be sure that the diagnose the patients’ symptoms well and put them in quarantine. He gets new facilities in his hospital to save the people. He tells that the new wing is ready. The doctors agree to assist Rohit in his new goals. Rohit tells that health ministry will also cooperate with them.

Meanwhile, Sonakshi meets the producer, who is also affected by cold, similar to the virus symptoms mentioned by Rohit. The producer signs Sonakshi and apologizes for his rudeness. She tells that she doesn’t want any advance right now. Sonakshi is happy to make a new start. She finds Veena at the cafe. She stops on seeing Nishi. She finds Veena much worried and wants to know the case. Vimmi meets Sonakshi and reveals about Tanya’s miscarriage. Sonakshi feels sorry for Tanya. Vimmi reveals that Rohan was responsible for harming Pari, while Rohit just saved Pari. She tells about the huge chaos in Sippy mansion when Rohit bashed up Rohan.

Sonakshi realizes her mistake to misunderstand Rohit. She wants to meet Tanya. She asks Vimmi to look after everyone at home. Nishi tells that they had to postpone Akash and Deepa’s marriage because of Tanya’s loss.

She tells that she has found a girl for Rohit and should convince him for marriage soon. Veena doesn’t think he will get convinced. Nishi tells her that Rohit will agree if Veena talks to him. She asks Veena to talk to him. Veena is in two minds. At the hospital, Ajit gets Naren’s check up done. He shows the reports to Rohit. Rohit asks them to keep the improvement a secret from Nishi.

He wants Naren to be back on his feet and expose Nishi’s truth to the family. Sonakshi visits the hospital to meet Tanya. She comes across Naren and wishes his speedy recovery. Naren shows signs of improvements, which surprises Rohit and Ajit. She meets Tanya, who misunderstands her. Sonakshi consoles Tanya’s sorrow. Tanya gets hyper and expresses hatred. She blames Sonakshi and Pari for ruining her life. She throws the scissors at her. Rohit saves Sonakshi and gets wounded. Rohit fakes anger on Sonakshi to keep her away from his family. He wants safety of both Naren and Sonakshi. He tells her that he will never take her back in his life even if she bonds with family again.

He tells that he helped Pari just to save Rohan from further mess. Sonakshi calls him a sick-minded person. He makes her leave by warning her. He feels sorry. He is much heartbroken. Sonakshi and Sumit start dating. Rohit wants Sonakshi to move on. Sonakshi blames him for breaking her heart.

Ronakshi is nailing now, awesome sequel just end Nishi’s chapter fast and show the romance between the two, loving it, so thankful that i did not leave watching the show, if we as viewers were there when the trp was falling we deserve a long run show, please don’t off air this show.