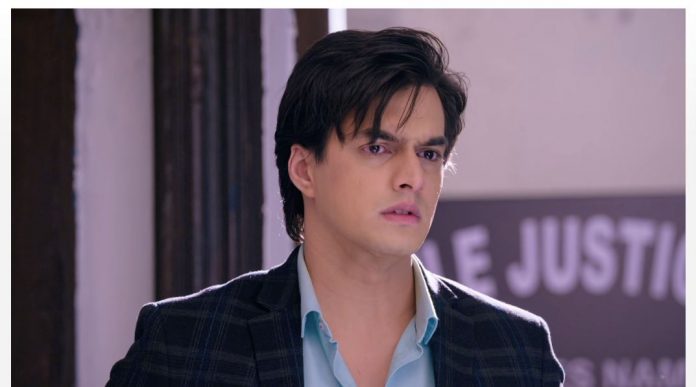 Yeh Rishta Kairav Shocker Regretful Kartik Broken Naira Goenkas await Javeri in the court, who would be defending Lav and Kush. Naira gets emotional to enter the court and recalls Kartik and her custody battle. Naksh gets Trisha there. Naira hopes that Javeri gets justice for them. She asks Trisha to be strong. Kartik rushes home on Gayu’s call. Kairav misbehaves with a servant and injures his head. He thinks no one can do anything since he is a Goenka, like Goenkas saved Lav and Kush after knowing their crime, they will save him as well, he can never get punished. He gets on the wrong path after seeing his family supporting wrong.

Gayu tries to stop him, but he goes out of control. Gayu gets helpless to call Kartik. Kartik reaches home and asks the urgency. Gayu reveals about Kairav’s madness and his big mistake. Kartik is shocked to know that Kairav is committing crimes with a hope that family will save him. He can’t believe that little Kairav has broken a servant’s head. Gayu tells that she has called a doctor for the servant’s treatment. Goenkas wait for Kartik in the court. They wonder where did he go and why. Kartik is much angry at Kairav.

He realizes that elders are at fault for presenting a wrong example for Kairav and Vansh. He realizes his mistake of not supporting Naira. Meanwhile, Javeri comes to the court and keeps Naira confused. Javeri gifts the plants to the judge and compares the plants with children. He tells that they have to raise children well, like they grow plants with love. He tells them that its disheartening when the children get blamed for such cheap crimes. He presents the case in such a way that Naira thinks he is defending Trisha. He then shocks her by insulting Trisha. He tells that his clients Lav and Kush are innocent, while Trisha is deceptive.

Manish and Akhilesh look for Naira’s lawyer. He tells that such cases are common, where a poor girl blames a rich guy for molestation. He tells that Trisha took advantage of rich Goenkas, she blamed Lav and Kush to get money from Goenkas. He proves Trisha wrong. Dadi feels bad to hear such things about Trisha, but keeps silence for the sake of her grandsons. He tells that Trisha is a fraud. Naira and Naksh are shocked. They support Trisha. Naira rages at Javeri and calls him a liar. She tells the judge that Javeri committed to fight their case and now changed his colours in the court. Javeri proves her wrong by saying that he didn’t commit or take any fees from her.

He tells that Naira wasn’t with Trisha at the time of the crime, she can’t testify that Trisha is saying the truth. He mocks Naira and asks her to stop being kiddish. Naira tells them that Javeri is a cheater, he promised to get justice for Trisha. He tells that if she has no evidence to support her case, why would he take a weak case in his hands. She shouts at him for cheating them and playing with Trisha’s emotions. Kartik reaches there and finds Naira shouting at Javeri. Naira scolds Javeri for staining Trisha’s character in the court. The judge scolds Naira for not arranging a lawyer.

Naira tells that Javeri is responsible for this, he has cheated them. Javeri asks her to stop blaming him, Goenkas has hired him and paid him fees as well. Kartik finds how Javeri cheated Naira by weakening the case further. Javeri asks the judge to grant bail to Lav and Kush. The judge gives time to Naira for arranging another lawyer until the next hearing. He grants the bail. Javeri tells Manish that he fulfilled his promise. Lav and Kush meet the family. Naira reprimands Javeri for insulting Trisha.

Javeri calls Naira mad to accuse him. She tells him that he has done a bad thing to ruin their case. Javeri tells that he has done his work, he has saved Goenkas’ respect. Naira tells that she will prove him wrong. She breaks down. Kartik understands her and apologizes. He tells that he made a big mistake by not supporting her. He tells about Kairav’s huge mistake. She is left in shock.