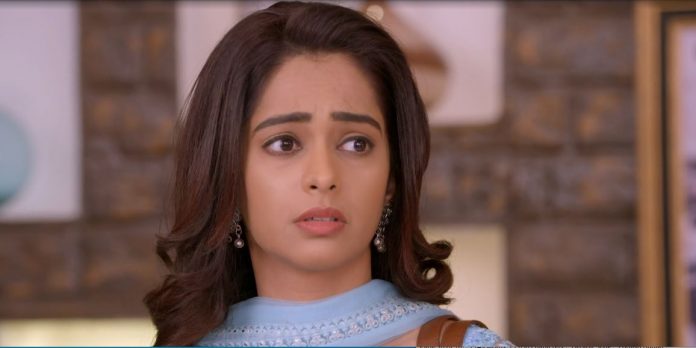 Prachi terrific Bhagya Raabta Guddan shocking reveals Akshat shouts out the truth to Antara that she isn’t his wife, they are divorced and he has paid her enough alimony. He tells her that she had kept big demands and he has fulfilled every demand just to get rid of her. He has divorced her and doesn’t want to remind this again and again. He tells that she is just acting as his wife in front of Guddan. He doesn’t want her to expect anything else from him. Guddan gets to overhear this truth. She is much shocked.

Tujhse Hai Raabta:
Anupriya is jailed. Aao Saheb and Kalyani are much in sorrow, just like Sarthak. Kalyani gets a shocking call from Rachit. He tells her that he can help her in Anupriya’s matter if she lies to Malhar that she is pregnant with his (Rachit’s) child. Kalyani is hugely shocked. Kalyani and Malhar will be seen Maha shivratri. They become Shiv and Parvati and perform the puja. Anupriya gets caught in the fire in the jail kitchen. Anupriya falls inside the fire. She shouts to Malhar for help. She feels suffocated by the smoke. Anupriya faints down inside the fired up kitchen. Kalyani isn’t aware of the danger approaching Anupriya.

Kumkum Bhagya:
Rhea feels guilty for a moment when she finds Prachi going to get electrocuted. She knows that Prachi will expose Maya and also her truth in front of Ranbir. She doesn’t want her image to get ruined. She thinks Ranbir will hate her and will never accept her love, if he knows her reality. She gets Prachi step in danger. Prachi doesn’t get electrocuted since Ranbir saves her in time. He worries for her. She tells him that she didn’t get any electric shock, else she would have died. Ranbir stops her from speaking about her death. They have a romantic moment again. Rhea’s evil plans just brings Ranbir and Prachi closer.