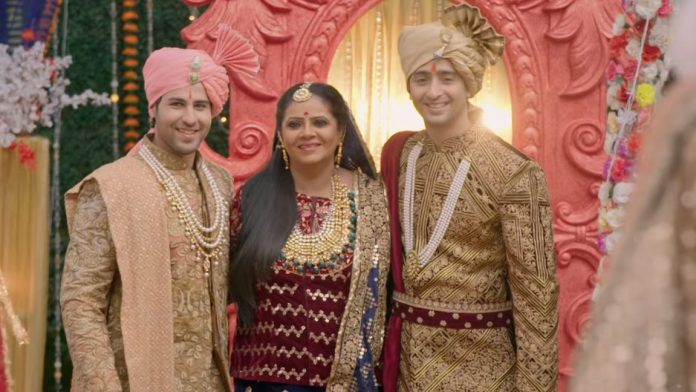 Kuhu Mishti Starplus Rishtey Pyar Meenakshi bitter side Mishti gets emotional during her bidaai ceremony. She cries much and parts away from her family. Abir promises to keep her happy and asks her to welcome the new beginning. Kunal confesses love to Kuhu in his unique way. He is much straight forward. He tells her that he isn’t much poetic like Abir or creative like her. He tells that he got colours in his life because of her. He feels blessed that she loves him. He is ready to change himself and asks her to teach him everything. She is ready to teach him her Kuhuness. Nidhi breaks their moment. Nidhi tells them that they have to welcome Abir and Mishti. Kuhu gets upset.

Kuhu wanted to spend more time with Kunal. Kuhu makes everything ready for the Grahpravesh. Meenakshi criticizes her and tries to make the sisters against. She plays her evil cards once again. She wants Kuhu to become her weapon to strike Mishti’s happiness. Abir acts scared of Meenakshi. He tells that Meenakshi can’t be trusted, he is much worried to take his wife home. She tells him that they will together face all the problems. He tells Mishti that he wanted to explain the same thing to relieve her tensions.

He asks her not to take any tension because of Jasmeet or anyone else. He makes her smile and relieves her stress by his sweet talks. He makes her promise that she will share every little and big problem with him. She agrees to him. He prays that Meenakshi doesn’t trouble her again. He wishes that Mishti always stays happy. Kuhu is also affected by Jasmeet’s brainwashing. She doesn’t listen to Parul, who is Kunal’s mum, but still a helper in the family. She also listens to Meenakshi. She tells that she will change all the decorations as Meenakshi wants. Meenakshi hasn’t accepted Mishti by heart. She wants to oust Mishti from the house.

She wants Kuhu to vent anger on Mishti and spoil her happiness. Kuhu wants to earn good points in Meenakshi’s eyes. She obeys her so much that Parul feels strange. On the other hand, Rajshri is much worried for Mishti. She feels Kuhu may trouble Mishti by falling into Meenakshi’s words. She tells that Meenakshi may use the tensions between the girls. Vishwamber asks her to be positive and expect them to develop a strong bond. He is much confident because of Abir and Kunal’s strong brotherhood. He tells that Kunal has changed a lot due to Abir’s guidance. He tells that Abir and Kunal, Mishti and Kuhu will keep the family united.

Abir and Mishti come home and find the darkness. Mishti feels everyone left them. Meenakshi surprises them. She tells Mishti that she wants to tell her that they will always be with her in darkness. She tells her that she is happy to welcome her favorite Bahu. Kuhu is jealous. She also wanted the attention. Meenakshi doesn’t let Mishti step on the floor and leave the footmarks on the floor. She asks Jugnu to get the carpet. She acts sweet and makes Mishti walk on the carpet. Mishti gets hurt by the ghungroo piercing the foot sole. She is happy after the Grahpravesh. Kuhu feels inferior once again. Meenakshi wants to use Kuhu and Mishti’s fights.

Mishti spends time with the family. She tells that she will never take Kuhu’s place. Meenakshi plays a game with Abir and Mishti, and tricks them. She tells Mishti that if she will win the game, then it will mean that Kuhu will lose. Kuhu tells Abir that they will always be winners. Kuhu feels bad seeing Meenakshi showering love on Mishti. Kuhu and Mishti get into a big argument. Meenakshi tests Mishti. She wants to throw out Mishti from the house.