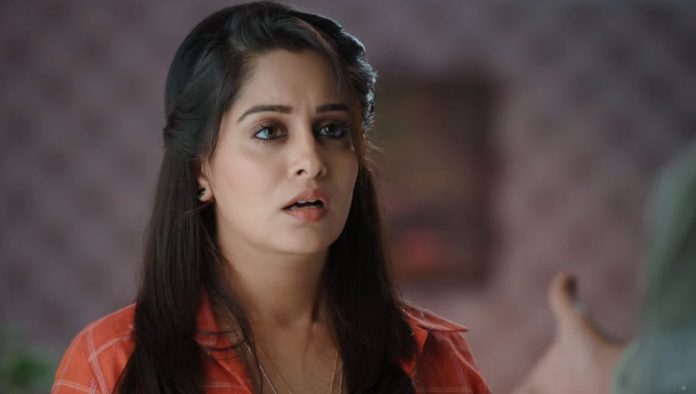 Kahaan Hum Sonakshi strangest demand Fresh track Sonakshi and Suman have a talk about the future. Suman tells her that she should have not gone to meet Tanya and to get insulted again. Sonakshi tells that she has gone to pacify Tanya over the loss, for the sake of old terms and humanity. Suman tells her that she always give a chance to Rohit to humiliate her, Rohit can’t be blamed if she always goes to anger him. She tells that Rohit and his family are worthless, they can never change and its better that they understand that Sonakshi isn’t interested in them. She tells Sonakshi to prove it to Rohit that she has moved on, so that he doesn’t humiliate her next time.

She tells that Sumit is a nice person, who understands Sonakshi well and also became a big support. She asks Sonakshi to give Suman a chance and see if her life gets sorted. She wants Sonakshi to settle down rather than crying on her failed marriage and failed career. Sonakshi really gives it a thought, just because she is angry on Rohit, she suppresses her feelings for him. She tells Suman that she will meet Sumit. Pari overhears their conversation and learns that Tanya lost her baby.

She is happy to know about Tanya’s miscarriage. She messages Rohan, asking him to accept her, marry her, just for the sake of their coming child. At Rohit’s hospital, the staff panics knowing about infected patients. Rohit is informed by the staff. He calls for an urgent meeting. He tells that they have to follow the plan he had earlier discussed with them and treat the infected patients in the quarantine zone. He tells that they have to make sure that the virus doesn’t spread more. Rohit asks the staff to wear the masks and not get in direct contact with the patients.

He arranges masks for Sippy family and also Rastogi family. He cares for Sonakshi and her family. Tulsi knows his truth that he loves Sonakshi. She feels sorry for him. Rohit gets back to work. Sonakshi finds her helper having the same symptoms as described by Rohit about the virus. She helps her helper. She isn’t aware of the deadly virus. She also gets in contact with the infected person. She carries the virus infection and isn’t conscious about it. She goes to meet Sumit. They have a silly odd moment. Sumit regards her just a friend. He asks her why did she accept the side character role that can spoil her career. She gets frank and tells him that she wants to have an affair with him.

He gets shocked by her sudden move. He asks her if she has a fight with Rohit and came to ask this. She tells that she doesn’t want to talk about Rohit. She asks if Suman didn’t tell him anything, they are good friends and know each other well. She tells him that if he doesn’t have any problem with her, if he has no affair with someone else, and if he has moved on from his past relationship, then she is ready to have an affair with him. He thinks how can she directly ask him for an affair, as if its some work proposal or something. He gets surprised seeing her bold appeal.

He tells her that he is a divorcee and failed in his last relationship, so her divorce with Rohit doesn’t matter to him. She tells him that then they shall start the affair right away. He asks her how can she say that. She tells him that if he is free, then they will plan their lunch date. He asks her why is she hurrying this way. She doesn’t listen to him and keeps her condition. He falls speechless in front of her. She makes a leave, while he rushes to meet Rohit to discuss about Sonakshi’s strangest affair demand.

The show was great until the twist to end the couples marry but you can see they made a wonderful couple but you can see that rohit father is on sonakshi side we as viewers to see that nishi gets caught that the family was pushed to hate sonakshi and see who was causing the problems will miss the show.