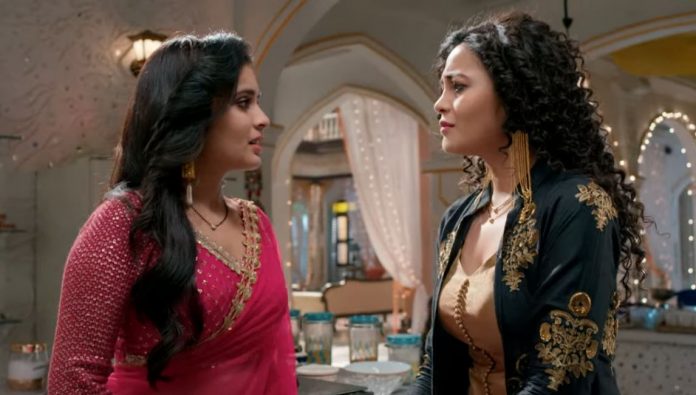 Rishtey Pyaar NEW Mishti huge warning Kuhu wicked rigid Abir and Mishti prepare the sweets for first rasoi competition. Abir selects Maheshwaris for judging the competition. Meenakshi asks Mishti to choose whom would she choose for the judgement. Mishti chooses Kuhu and pays her a honour. Everyone gets emotional on seeing the brownie. Mahesgwaris tell the childhood story of Mishti making a brownie for Kuhu when they all forgot her birthday. They tell that Mishti has always tried to make Kuhu feel special. She is always praised for her special virtues. Kuhu is insecure and jealous for this reason. Kuhu tastes the brownie and tells her that Mishti has made a perfect one.

Vishwamber declares Abir as the clear winner. Abir wins the competition. Meenakshi asks Kuhu to give the necklace as a gift for Mishti. Kuhu has broken it by mistake in anger and later regretted. She is worried that the family will know her mistake. She wonders what would she do if she gets caught by the family. She tells them that she wants Parul to do the ritual. Meenakshi has seen Kuhu breaking the necklace and understands why she is avoiding the rituals. Meenakshi and Rajshri thank each other for giving them such great children. They share a mutual appreciation. Kuhu makes many excuses to get rid of the blame.

Meenakshi asks Kuhu to give the gift right away with any further ado. Kuhu takes the necklace, which suddenly breaks off in front of them. They are shocked to see the broken necklace. Meenakshi tells them that she will fix the necklace, it was fine till now and suddenly broke. She gives the hint to Mishti that Kuhu has broken it. Mishti looks at Kuhu’s tensed face. She finds her nail broken and realizes that Kuhu has broken the necklace. She wants an answer from Kuhu. Kuhu didn’t intend to spoil Mishti’s day. Mishti fights with her jealousy streak. She asks Kuhu why isn’t she ending their fights.

She reproofs Kuhu for always spoiling her happiness. She didn’t wish Kuhu to break her special gifts. She tells that she will not sit quiet if Kuhu does any such thing again. Kuhu explains that she didn’t do this deliberately. Mishti asks her what about snatching the mandap. She counts her demands. They find Rajshri at the door and act to be loving sisters. Rajshri wants them to be together always. Maheshwaris and Rajshris spend time. Meenakshi, Nanu and Parul tell them that Abir has selected this necklace for his wife when he was a child. Everyone laughs on Abir, who had kept the jewellery for his wife since childhood. Meenakshi tells that she had kept the necklace safe since then. Mishti tells that she will keep it safe.

She gets more upset with Kuhu. Kuhu tells that she didn’t know all this and didn’t wish to hurt her. She asks Mishti to forgive her. Meenakshi feels Mishti and Kuhu will soon fight and then prove themselves wrong for the family.

She tells them that Abir will do Shiv abhishek on Shivratri. Abir tells that he always thanks Shiv for giving a good family, but this time, Mishti will be doing the rituals. He misses his dad. Vishwamber asks him to just value the relations he has. Abir tells that Mishti and he will manage all the arrangements. Kunal and Kuhu also offer help, but Mishti refuses, asking them to spend time. Kuhu wants a chance to assist Mishti. Mishti doesn’t want anyone to go wrong and makes Kuhu away from arrangements.

Kuhu feels bad that Mishti is upset on her. Kunal asks Kuhu what is bothering her so much. He wants to know the matter and help her. Kunal tells that he really wants to help Abir in arrangements. Kuhu doesn’t want to go against Mishti’s wish. Mishti is also upset. Abir senses this. Mishti prepares for the Shivratri puja. Kuhu makes another mistake by getting provoked by Meenakshi. She adds the sleeping pills in the coffee to make Mishti fall asleep and miss the arrangements. Kuhu’s plan fails. Abir and Mishti don’t consume the spiked coffee. Meenakshi plays with their emotions. What will Mishti do to handle Kuhu? Keep reading.