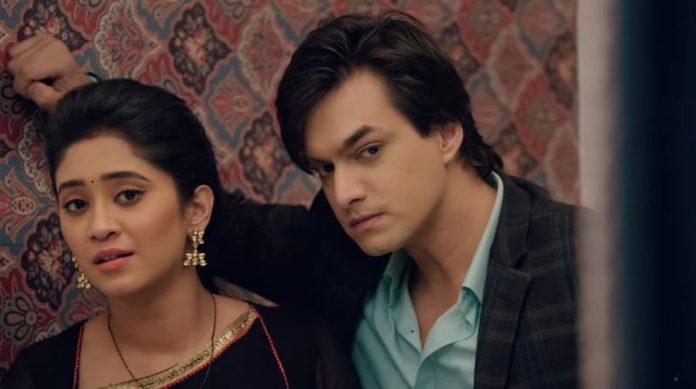 Yeh Rishta Kaira declaration Goenkas fear worse upshot Kartik and Naira take Lav and Kush’s phones. They go to meet Kairav again and hug him. They find some papers there and make a frog and tiger for him. Gayu asks them to go before anyone sees them. They try to unlock the phone and fail. They go home. Naira feels that they should have got Kairav with them while he was asleep. She tells that he would have not even known if sh took him in lap and brought with them. Kartik tells that Kairav would have got disturbed mentally and objected to their decision. He wants Kartik to understand them well and then choose to be with them, since they are with the truth. Kartik tells her that they should not be with Kairav, they should leave him alone so that he can realize that he is at fault.

He encourages Naira to focus on their plan. They meet Naksh and tell him the plan to take the phones to some hacker and get it unlocked so that they can find the deleted data. Naira tells Kartik that they will soon be finding the evidence. Kartik likes her plan of hiring Shivani against Javeri. Naksh tells them that Lav and Kush’s news got printed in the newspaper’s front page. He tells that Goenkas would be hugely disappointed and upset with them. He advises Kartik and Naira to go home and talk to them. Kartik is completely on Naira’s side.

He tells Naksh that he will not give up and find the truth, Lav and Kush can’t be spared free like this, which will give a wrong motivation to Kairav and Vansh. Bhabhimaa asks Naira why is she so rigid that she is putting her relations at stake. She wants Naira to return home and forget the justice thing. Kartik and Naira don’t want to listen to anyone. Goenkas fume on seeing the newspapers with Lav and Kush’s court hearing headlines. They also read that Kartik and Naira have left the house to seek justice. Manish tells that Kartik has gone against him and proved to the world that Lav and Kush are wrong.

He didn’t expect this from Kartik. He wants Kartik to return home and set things right. The family asks him to summon Javeri and seek an advice. Javeri soon comes to them. He tells Manish that Kartik will lead them towards disaster if they don’t stop him soon. He asks Manish to just control his son and bahu from ruining their image in the society. He advises him to have an out-of-court settlement. Manish calls up Naksh to ask Kartik and Naira if they are willing for a settlement. Bhabhimaa wants them to reconcile with the family and not break the peace. Kartik and Naira refuse to Manish.

Manish asks them to come home for a talk if they respect him and care for their relations. Kartik and Naira want to rush to the hacker and get the phones unlocked to get the data. Javeri plans to stop Kartik and Naira from making him lose the case, which would mean Abhishek falling in danger as well. Kartik and Naira reach Goenka house and tell that they will always come on family’s call. Kartik tries to make Manish understand that they aren’t wrong either. Kartik sounds confident to scare Javeri. Naira tells that they have the evidence to teach him a lesson. Shivani joins Kartik and Naira. This shocks Javeri.

She tells him that she has already resigned and now taken up Trisha’s case. Naira asks him to let his student prove his capabilities and teachings by winning the case. She tells that he will pass if his student proves his teachings right. Kartik refuses for any settlement. He tells that he doesn’t want any emotional blackmail. Manish gets speechless. Dadi fears that the family will shatter. She wonders what proof Naira has. She doesn’t want Lav and Kush to go to the jail. Surekha pleads to Manish to save her sons. Javeri is more worried for his son and also his public image. He can do anything for his reputation.

Lav and Kush inform them that their phones are stolen, which contained a video. They suspect that Kartik and Naira have stolen the phones. Gayu worries on hearing this. Kartik and Naira get the hacker home and get the phones unlocked. They fail to find any data. They ask Trisha about any witness, who can support her in the court. Trisha remembers meeting someone on the way before her accident. Kartik and Naira rush to find the witness and prepare him for the appearance on the court.