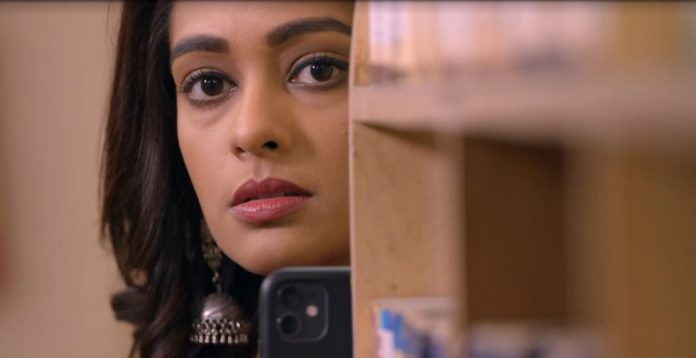 Kumkum Bhagyaa Stunned Prachi Ranbir fresh plans Prachi is worried that Ranbir will be forced to marry Maya. Sarita isn’t worried knowing Abhi is supporting Ranbir. She gives her idea. She asks Prachi to ask Ranbir to act further and agree for the marriage, charm Maya and speak good things to her, so that Maya also gets some tension. Sarita tells that Ranbir should confess love to Maya again. She makes Prachi jealous by her idea. She tells hat Maya can admit that she intentionally trapped Ranbir and they can record the statement. Prachi likes the idea. She thinks if Maya doesn’t say this, it will be wrong. She agrees to make the video by hiding somewhere.

On the other hand, Ranbir’s friends ask him about his marriage with Maya. Ranbir tells that he isn’t marrying Maya. He reveals that Maya is a fraud girl, trying to trap him. Prachi stops him and asks him to meet Maya. She reveals her new plan to him. She tells that she will explain him the outcome. He asks her if she is sure. Meanwhile, Rhea calls Maya to fix a meet. She learns that Maya has gone to the college. Ranbir falls nervous. Prachi asks him to just be confident and make Maya assured that he is happy for the alliance, once she is convinced, she can tell the truth of the molestation case. He is ready to emotionally blackmail Maya.

She hopes that she will reveal the name of her partner. She tells that he should please Maya and ask for her secrets. She knows that Maya’s secret will be the cheating thing. She goes to prepare for the recording. Ranbir gets her wishes. He goes to meet Maya. He tries to emotionally blackmail her and trap her by his charm. He tells that they should trust each other so that they can at least have friendship in their marriage. He takes Maya to the library. He begins to charm her. He tells her that he wants to confess that he likes her now. He praises Maya for being a good combo of beauty and coolness. He impresses Maya by praising her.

Maya gets glad. He tells her that its their destiny that they got together. She is confused to see him accepting her. He tells that he is very happy to get married to her. He hugs her. Prachi gets angry seeing her. He tells that there shouldn’t be secrets between them. He asks her to be honest as well. He tells her that he wants to tell her about the girl he loves, it was Prachi. Prachi doesn’t know he is saying the truth. She doesn’t believe his confession. He apologizes to Maya. He fools her further with some pleasing lines. He wants her to share her secrets as well. He tells that he will admit that he likes her and wants to marry her.

He doesn’t want everyone to misunderstand them. Maya leaves before admitting the truth. He gets angered. Ranbir and Prachi get locked in the library. Rhea tells her friends that Ranbir won’t even befriend Maya, he will never marry Maya. She rages in frustration. She wants to marry Ranbir. Ranbir and Prachi try to get help from someone. They don’t have phones to call for help. She doesn’t want to be stuck. Maya gets thinking about Ranbir’s confession. Rhea stops her to reprimand her. She wants Maya to refuse for the marriage. Maya tells her that Ranbir is ready to marry her and even she wants to marry him. Rhea loses her cool. She slaps Maya in rage.