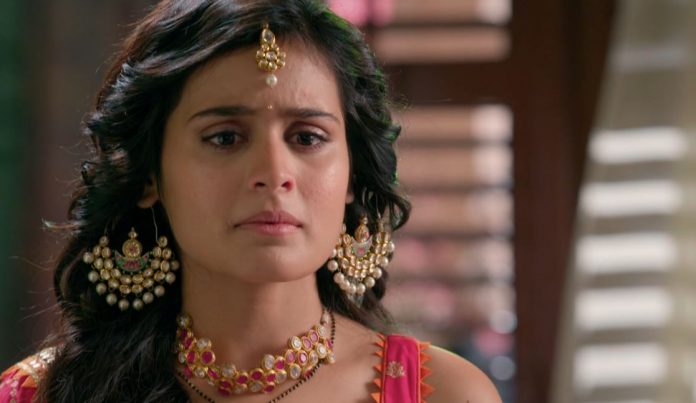 Mishti Abir Rishtey suffer Meenakshi Kuhu evil put up Mishti overhears Kuhu and Meenakshi’s conversation. She wants to find out the matter from Kuhu by confronting. She tells Rajshri that Abir isn’t fine. She asks Rajshri to take care of him and rushes to Kuhu. She asks Kuhu if she has spiked the coffee to stop Abir from performing the puja. Kuhu denies the blames. Mishti tells that she knows her well and also her intentions. She tells Kuhu not to play any game with Abir, she will not tolerate it. She threatens to tell Kuhu’s mistake to everyone. Mishti tells Meenakshi that she has come to tell something. Abir wants to stop Mishti. He faints down and makes everyone worried.

Meenakshi wants to take him to the hospital, but Mishti insists that they take him home, where she has already called a doctor. Meenakshi tells Rajshri that she has to listen to Mishti just because of Abir. Kunal tells her that maybe Mishti is thinking for Abir’s betterment. Doctor checks Abir and tells that the medicines couldn’t end the effect of the sleeping pills. Meenakshi worries for her son. She didn’t think that her son will get trapped in her plan. Kunal worries for his brother. He shares his pain with Kuhu.

He asks her never to hide anything from him. Kuhu is scared to tell her mistake. Doctor tells the family that Abir is fed some sleeping pills and the matter would go to police if someone did this deliberately. Mishti tells the family that Abir wasn’t in senses and didn’t perform the puja. Parul praises her for doing a wife’s duty and take the blame on her. Kuhu fails to tolerate the praise for Mishti. She thinks she has done wrong with Abir. Jasmeet brainwashes her. She asks Kuhu not to accept the crime and blame Mishti for it.

She asks Kuhu not to lose her relations. Mishti tries to find out if Kuhu has done this deliberately. Meenakshi summons Kuhu and questions her about the spiked coffee. Kuhu lies to her and acts innocent. Kunal and Mishti team up to take care of Abir. Mishti wants best care for Abir. She asks Kunal to look after himself. Rajshri tells her that Kunal and Abir love each other a lot, and their bond should always be the same. Vishwamber wants to know if there is any fight between Kuhu and her, if so, then it may harm Rajvansh family bonding. Mishti lies to him that everything is fine, Kuhu is supportive of her.

Later, Vishwamber offers help to Rajvansh family. Meenakshi imagines to create a rift between Mishti and Kuhu. She dreams that the sisters are having a huge argument and embarrassing their own family. Meenakshi wishes that her dream turns true. She wants to prove that her Bahus are good for nothing, they should get ousted. Mishti tells Meenakshi that her family is leaving. Kuhu is much stressed. She wants to see Abir. Mishti fails to talk to her. Mishti asks Meenakshi not to complain about her and instead teach her to rectify her mistakes. Meenakshi acts as a caring mother and makes Mishti emotional. Mishti apologizes to Meenakshi.

She wants to be a good Bahu. Mishti wants to speak to Kuhu. She meets Kuhu and learns her intentions. Kuhu tells that she wanted to stop Mishti from performing the puja. Mishti angrily slaps her. She wants Kuhu to end her insecurities. She tells that she could have exposed her truth, but she didn’t do this, so that the family doesn’t shatter. She asks Kuhu to have a self-realization and change herself.