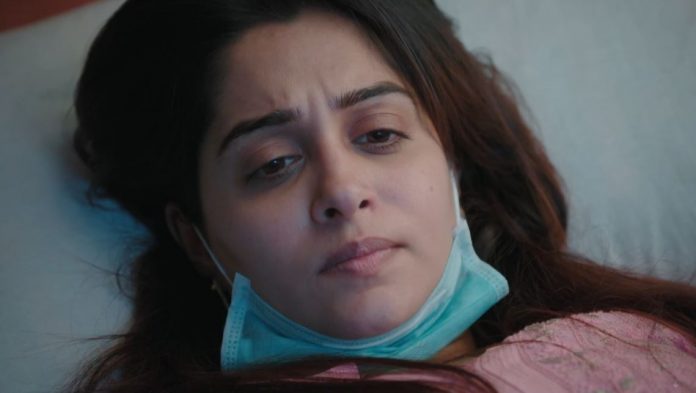 Kahaan Hum Starplus Preview Sonakshi accepts fatal risk Veena is panicking and shattering to see her son Rohit going towards the death. She can’t imagine her life without Rohit. She learns that he just has 36 hours of his life and then anything can happen to him if he is left untreated. Rohit wants Veena to value Sonakshi, since Veena has always misunderstood Sonakshi. He asks Veena to plead to Sonakshi to save him by coming for the antidote procedure, since its just Sonakshi who can take the huge risk on her life and save him. Veena realizes her mistake to trouble Sonakshi.

She thinks if Sonakshi will agree to her request. She is reminded of her crimes to kidnap Sonakshi, insult her and oust her. She worriedly goes to call Nishi. She can do anything to save her son. She can’t see Rohit in the terrible state. She worries to see his health deteriorating. Rohit wants the family to get Sonakshi. Veena calls Nishi to ask about Sonakshi. Nishi keeps her image clean. She tells that she was being good to Sonakshi and feeding her dinner before sending her away. Veena tells her that Sonakshi’s rare blood group can help the doctors in making the antidote for the super virus.

She asks Nishi to get Sonakshi to the hospital at the earliest. She tells Nishi that Rohit has told her about the immediate procedure required, Sonakshi can save his life. She asks Nishi to convince Sonakshi and get her for the tests. Nishi can’t believe this.

She assures Veena that she will bring Sonakshi. Nishi goes to tell Sonakshi about the fate’s new favor on her, how Sonakshi is the chosen savior for many people, and even Rohit who is near his death. Sonakshi worries for Rohit and pleads to Nishi t take her to the hospital. She is ready to take any risk, if she can save many lives. Nishi tells that she will take Sonakshi, but she has her conditions too. She wants Sonakshi to prove herself as a gold digger, so that Sippys never accept her in the family after the huge favor. She tells Sonakshi that Sippys should never like her again, the hatred and misunderstandings should always be intact. Sonakshi agrees to her condition, since her main agenda is to save Rohit.

Ajit informs Yash that he is going for an important meeting. Naren overhears him and tries to stop him to tell him about Sonakshi caught by Veena. Ajit leaves. Naren by his self will, gets up from the wheelchair. He falls down the stairs and gets hurt. Tanya witnesses this and recalls her accidental fall. She realizes that she lost her baby. She breaks down. Rohan takes care of Naren and rushes him to the room.

He asks Tanya to help him. He realizes that Tanya has accepted her miscarriage truth. He gets the doctor for Naren first. He wants to pacify Tanya and leaves Deepa with her. Doctor tells Rohan that Naren reacted like that for some motive and fell down.

He tells that its a sign of recovery. He tells Rohan that Naren may get hurt again, he needs much care and an attendee always. Rohan looks after Naren and then goes to see Tanya. Tanya tells Rohan that she lost her baby, but wants to conceive again. Rohan is heartbroken and loses courage to tell her that she can never conceive. On the other hand, Nishi takes Sonakshi to the hospital, while Veena, Yash and Akash await them. Sippys are worried seeing the dying patients. They worry for Rohit. Sonakshi meets them. The hospital staff also worry for the best heart surgeon Dr. Rohit. Sippys plead to Sonakshi to save Rohit.

Sonakshi is triggered by Nishi to behave rudely with Sippys. Sonakshi gets angry on Veena and reminds the humiliation she received from Sippys. Veena, Yash and Akash beg her to go for the tests and save Rohit. Sonakshi tells them that she will do the favor on them, just for the sake of humanity.

She tells that she cares the least for Rohit, she will undergo the trial to save the people. She asks them to pay a heavy compensation to her family if anything wrong happens during the trial. She asks Veena to prepare the legal papers.

Veena agrees to all her terms. Sonakshi feels bad to keep a gold digger’s image. Nishi wants Sippys to always hate Sonakshi and call her selfish. Sonakshi wants to save Rohit’s life some how. She meets Sumit, who is relieved to see her. He asks about the kidnappers. Veena is tensed, but Sonakshi doesn’t name her. She asks Sumit to look after her family. She undergoes the procedure in the OT after knowing the risk. She makes a wish to see Rohit.