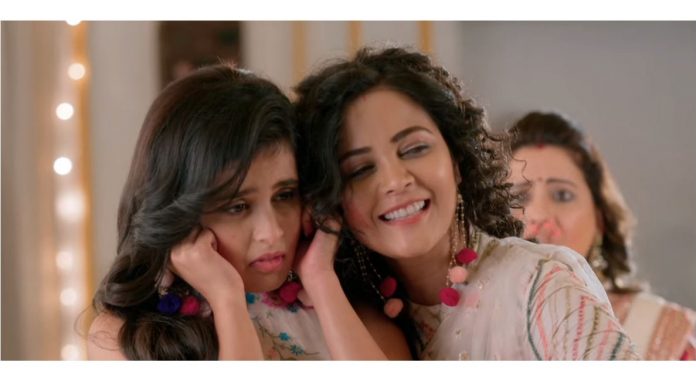 Drugged drama Rishtey Starplus Mishti Kuhu insult Meenu Mishti stays unhurt after her accidental slip near the holika fire. Abir worries for her a lot, just like her family. He caresses her and asks her if she is okay or not. Mishti tries to get back to normalcy. Until then, Meenakshi amplifies the drama by questioning Kuhu about Mishti’s fall. Abir doesn’t want anyone to doubt Kuhu. Kuhu tells that she doesn’t know anything, but she is hurt that she is being questioned. Kaushal tells that Meenakshi is asking casually. Abir opposes Meenakshi’s drama. Kuhu gets too raged that everyone is asking her the same thing, as if she has purposely hurt Mishti.

Kuhu cries and asks them if they are doubting that she has tried to harm Mishti because of her increasing jealousy and rage, for the fact that Mishti has received the property instead her on her birthday. She tells that she isn’t such a low person to harm someone’s life. She asks Mishti to tell about her fall. Mishti tells that she has slipped by herself. Kuhu is much hurt that everyone regards her the vamp figure in the family. She gets heartbroken. Abir thinks Meenakshi did wrong to ask Kuhu and hurt her. He argues with Meenakshi, while Mishti tries to make the matter come to an end. Kunal tries to support Kuhu.

Mishti asks Abir not to worry for her, she is totally fine. Abir tells that Kuhu didn’t deserve this. He doesn’t know what all Kuhu has done by now. Jasmeet tries to insult Mishti. Mishti tells that Abir was unwell, even then they have arranged a surprise for Kuhu and got gifts for her. Jasmeet asks her to know her limits. Vishwamber scolds Jasmeet and sends her home. He apologizes to Mishti. Abir gives his word that he will look after Kuhu. He lightens their mood. He invites Maheshwaris for the holi function. Maheshwaris make a leave. Kunal tries to pacify Kuhu on finding her crying. Abir takes Mishti to Kuhu.

He cheers up Kuhu in his style and makes her smile. Kuhu tells that Mishti should have defended her in front of everyone. Abir asks Mishti to clarify herself. Mishti is hurt thinking Kuhu has harmed Abir. She doesn’t want to defend Kuhu. She can’t forgive Kuhu. Mishti walks out, which angers Kuhu again. Kuhu informs Jasmeet that Mishti is showing much attitude. Jasmeet asks her to try to win the family. Kunal doesn’t want Kuhu to keep complaining about Mishti. They have a romantic moment.

She doesn’t want to apologize to Kuhu. Abir doesn’t question Mishti about Kuhu. He wants her to stay the same always, since he loves the angry violent Mishti. They spend quality time. He tells that he has fulfilled the kiss challenge. He gives her the same challenge.

She tells that she will fulfill it if he takes up the new challenge to apply colours to her first during the holi festive fun. Kuhu doesn’t like holi, but Abir and Kunal want her to play holi. Kunal gives up and tells that he won’t apply holi colours to her if she wants so. Mishti celebrates Holi with the family. She enjoys her time with them.

Abir tries to trick her and apply her colours before anyone else does. Mishti doesn’t get caught by him. Abir and Mishti’s holi challenge goes on. Abir and Kunal realize Mishti and Kuhu’s cold war going on. Meenakshi fakes good behavior and shows concern for Kuhu. She asks Kunal to bring the sisters together. Kunal doesn’t want to get into the mess. Abir tells Kunal that they should unite the sisters, so that they stay happy as well. They come up with a plan to spike their thandai and then make them sort their issues. Maheshwaris also join for the holi. Mishti plays holi with them.

Kuhu stays away from the holi fun, but Kunal brings her downstairs. Mishti and Kuhu have the spiked thandai and get intoxicated. They make fun of Meenakshi, who is their dragon mother-in-law. They laugh at Meenakshi and crack jokes, which makes Abir laugh. Meenakshi doesn’t want the sisters to find strength in their bond. Abir and Mishti, Kunal and Kuhu will be seen romancing during Holi. What will Meenakshi do on seeing them happy and together? Keep reading.