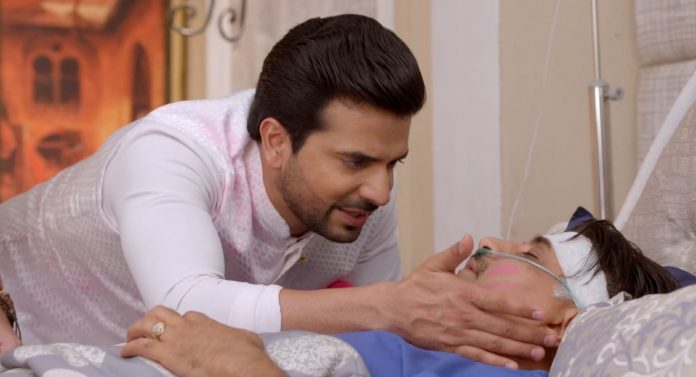 Kundali Bhagya Sherlyn Mahesh face off Preeran romance Sherlyn cleverly hides Prithvi in time when Rishabh comes and sits crying to fool him. Rishabh asks the reason for her tears. She demands him to play holi with her. He consoles her and applies colours to her. He tells that he didn’t wish to be rude towards her. He gets close to find Prithvi in the room. Sherlyn lies that there is no one in the room. Prithvi makes a leave after they leave. He hides when Preeta comes there to find Kritika. Mahira follows Preeta and locks her in the washroom. Prithvi witnesses this. Preeta asks for help to get free. Shrishti reaches at the same time and asks for Preeta. Prithvi doesn’t want anyone to see him.

Mahira locks up Shrishti as well. Rakhi takes care of Mahesh and pleads him to get up for the sake of family. Her tears do the miracle and wake him up from the drama. She applies colours to him. She gets happy when he comes out of coma. He asks for Karan and Rishabh. She runs to call their sons. Shrishti rescues Preeta, knowing Mahira locked her too. They realize that Mahira has locked them for a motive. Shrishti wants to find some way to go out. Prithvi hears their conversation. Preeta tells Shrishti that she will not let Mahira’s plan succeed.

Prithvi realizes that Mahira is also a fraud girl, who can do anything to win Karan. Preeta and Shrishti try to climb over the table and go out of the window. Prithvi realizes that they will be climbing on him, since he is acting to be a motionless table. Kritika tells Sameer about Sherlyn and Mahira’s weird behavior. She doesn’t like Mahira’s new change. He tells that Mahira is in Sherlyn’s bad company. Mahira sends the thandai for Karan. Sherlyn tells that Karan will soon get intoxicated. Mahira and Sherlyn stop Rishabh from drinking the thandai. Mahira insists Karan to try the thandai. Karan refuses at first and then comes in her words.

Rakhi tells them that Mahesh is out of coma and wants to meet them. Shrishti and Preeta get the window opened and rush out. Rakhi asks Mahesh to talk to their sons. Karan and Rishabh ask Mahesh to talk to them. The family pleads Mahesh to come back to them. Sherlyn gets worried that her truth will come out. Rishabh’s emotional speech brings Mahesh to consciousness. Mahesh sees Sherlyn, who is worried on getting Prithvi’s call. Mahira finds Preeta and Shrishti coming there. Preeta and Shrishti get glad to see Mahesh recovering.

The family is happy that Mahesh is finally conscious, but his tensed reactions scare them. Mahesh reacts in fear on seeing Sherlyn, who tried to harm him. The family observes Mahesh’s reaction on Sherlyn. Preeta calls the doctor to update about Mahesh’s condition. She treats Mahesh by following the instructions. Karan realizes his mistake to blame Preeta for Mahesh’s state. He finds Preeta caring for Mahesh. Preeta and Shrishti lock Sherlyn and Mahira in the storeroom. Karan gets intoxicated and flirts with Preeta. Mahira’s plan backfires. Karan and Preeta get to spend romantic plan. Karan expresses his feelings for Preeta, leaving her surprised.

Best comment by Mala ramlall:
So now is sherlyn 24 months pregnant, since when does a pregnancy go on for ages, and not the slightest of a bump. Mahesh needs to recover without memory loss.