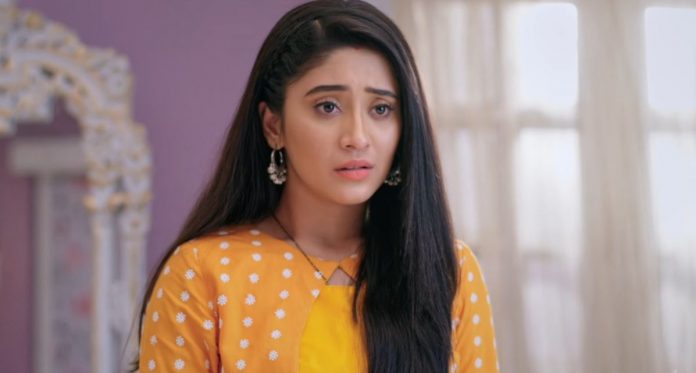 Starplus Yeh Rishta Naira receives upsetting shocker Kartik wants Naira to keep hope and belief that he will soon walk. He doesn’t like to see disappointed and upset face. She tells him that she believes he will get fine soon, its just her guilt that is troubling her. She wants him to walk on his own so that her guilt gets less. She feels responsible for his state. He asks her not to care for Dadi’s words. He explains her that she is his life, she should be happy. He doesn’t want to see guilt in her eyes. Dhruv tries to contact him, but fails. He wants to give the data retrieved from Lav’s phone. On the other hand, Gayu gets worried for Naira being accused by the family.

She tells Samarth that its wrong that Naira is blamed for Kartik’s accident. She doesn’t want injustice with Naira. Samarth pacifies Gayu. He asks her not to take stress in the pregnancy phase. She wants the family to respect Naira and not hurt her more. Later, Kartik finds Naira disturbed. He knows her well and guesses that she is going to meet Javeri. He stops her from going and withdrawing the case. He knows that her courage has got low because of his state. He asks Naira not to lose out to evil doers because of any accusation. He tells her that he has overheard Surekha and her conversation and wanted to know her answer.

He asks her why didn’t she answer Surekha, knowing they all are wrong. He doesn’t want her to get scared of anyone. She tells that she can’t see him helpless. She tells him that she didn’t stop him from going when she was getting a strong intuition of the bad happening. She feels bad that Goenka family broke because of her. Trisha shatters on finding them in pain. She doesn’t want Naira’s happy family to be ruined because of her battle. Kartik tells that he is ready to fight, she shouldn’t give up. Trisha goes to the police station, while Naira too wants to withdraw the case. Kartik asks Singhanias to explain Naira that she shouldn’t take such a step.

Kartik asks Naksh to stop Naira from going. Naira tells that there won’t be any risk for anyone’s life. Kartik get compelled to get up from the wheelchair. Naira hears Kairav shouting and stops on seeing Kartik on his feet. She runs to Kartik and hugs him. Trisha doesn’t want Naira to lose her family. She knows that Kairav needs his parents. She doesn’t want Kairav’s future to gets spoiled. Trisha gives her statement and takes back the case, freeing Lav, Kush and Abhishek from the court battle. Javeri gets the news to Goenkas and celebrates with them.

He tells that Trisha has withdrawn the case and now their children are free. Kartik shows the right path to Naira. Naira apologizes and decides to fight the case. They get motivated again. Shivani shocks them by telling that Trisha has withdrawn the case and now they have no hopes left. Kartik and Naira question Trisha for her decision. They scold Trisha for losing hope so soon and not thinking of them. Trisha tells that she has done everything for Naira, since she can’t risk Naira’s family. She tells Naira that she isn’t scared of anything, but doesn’t want Naira’s life to have troubles.

Naira tells that she is guilty that she couldn’t help Trisha get justice. She tells that truth is the mighty one. Trisha asks Naira to focus on her life and duties towards family. Naira gets much upset. Gayu is much worried for her sister, who would be in pain because of Goenkas. Just Gayu feels Naira’s pain. Kartik and Naira share their sorrow. They vow to get justice for Trisha and not let the evil doers escape. There will be big celebrations in the holi celebrations.