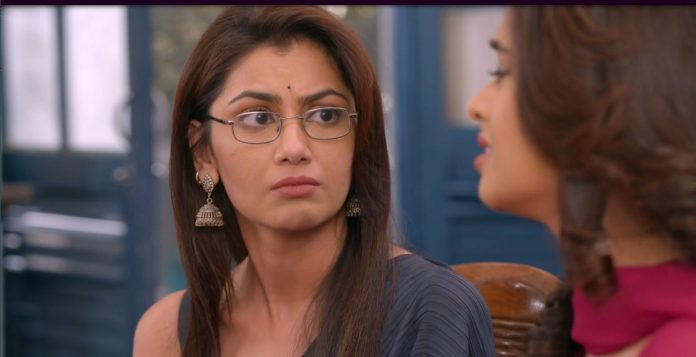 Zee5 Tonight Raabta Kumkum Kundali 3 Big twists Malhar realizes Kalyani slept in the room when she makes excuses. He asks her to choose her life with Moksh and let the baby go. Kalyani refuses and feels helpless. She comes to Lalgali being curious about the cupboard which was brought from there and kept in the backyard of their house. She comes to Mastani Bai’s place and sees him getting ready. Atharv removes his wig and takes a heavy breath. Kalyani is about to see his face.

Kundali Bhagya: Shristi pretends to talk on the phone and says who will tell them that she is going to storeroom of the outhouse to get first aid box for Mahesh. Sherlyn and Mahira hear her and go to the storeroom. They search the first aid box. Sherlyn realizes they have played their own trick on them and tells Mahira. They are about to run out when Preeta and Shristi lock the door. Preeta asks Mahira what does she think that she can lock her in the room and will make her dirty plan successful. She says it will never happen. They leave from there. Sherlyn tells Mahira that Karan is in drunk state and surely Preeta is with him. Preeta goes to Karan.

Karan tells that he is very happy. Preeta says even she is happy. They wish each other happy holi. Karan asks Preeta to hold him else he will fall. Preeta realizes he has drank bhang and scolds him asking why did he drink bhang. Karan winks at her. She asks what happened, why did you wink his eyes. Karan says it is my eyes and I will wink. He hugs her. They share some good moments. Karan expresses his love to Preeta.

Kumkum Bhagya: Prachi comes to Pragya and tries to convince her to come to the holi party at Kohlis’ house. She tells her that this is the last chance for them to save Ranbir from Maya and break his engagement with her. She asks will you come to the holi party tomorrow to make everything fine. Pragya agrees to come for Ranbir and her sake. Later in the holi party, Prachi comes to Ranbir and smears colour on his face. Ranbir gets surprised. Prachi dances happily that she applied him he colours first. Ranbir looks at her. He runs behind her to colour her face.